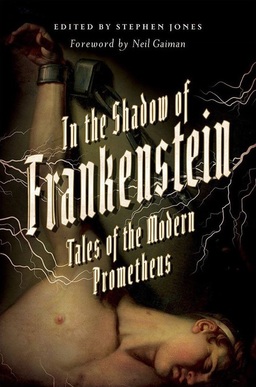 Mary W. Shelley’s gothic horror masterpiece Frankenstein; or, The Modern Prometheus, was published in 1818, shortly after the author turned 20. As we approach the 200th anniversary of one of the greatest horror novels in history, we can expect to see plenty of tribute volumes. But for my money, the only one you need is Stephen Jones’ massive In the Shadow of Frankenstein: Tales of the Modern Prometheus, a 712-page tome which collects pulp stories from Astounding and Weird Tales, modern riffs on the legend of Frankenstein, and three complete novels.

Frankenstein… His very name conjures up images of plundered graves, secret laboratories, electrical experiments, and reviving the dead. Within these pages, the maddest doctor of them all and his demented disciples once again delve into the Secrets of Life, as science fiction meets horror when the world’s most famous creature lives again.

As an electrical storm rages overhead, the generators are charged up, and beneath the sheet a cold form awaits its miraculous rebirth. Now it’s time to throw that switch and discover all that Man Was Never Meant to Know.

The only difference between the two editions, is the addition of Neil Gaiman’s two-page Foreward and that “Celebrity Frankenstein” by Stephen Volk is not reprinted.

Yeah, that’s why I noted that in the final paragraph.

However, my review copy DOES contain Volk’s “Celebrity Frankenstein,” which was published in 2012 and didn’t appear in the original 1994 edition. Does yours differ?

Sorry about that – I read the site on my phone and I missed that.

Yes, I purchased the Kindle version and it doesn’t include the Volk story. Strange.