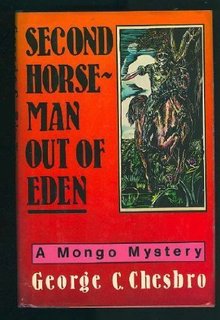 I haven’t heard much about George C. Chesbro lately, and I don’t think it’s entirely because he died in 2008. Chesbro was one of those writers who are somehow just a little bit too extreme – in one way or another – to become widely popular. The people who like Chesbro’s stuff really like it, and the ones who don’t, are often left a little perplexed.

Take his most well-known, and certainly his most popular character. Robert Frederickson is a dwarf, with a genius-level IQ, a black belt in Karate, and a PhD in criminology. He’s also a retired circus headliner who went by the name “Mongo the Magnificent.” He got bored just being a college professor, so he became a licensed private investigator. Somehow, the cases he gets all seem to skew into the weird end of the spectrum. Go figure.

So, what was too much for you? The dwarf? The IQ? The PhD? The PI license? If your reaction to Mongo’s description is “oh come on! Really?” you might want to look at some of Chesbro’s other work. But if your reaction is more like mine was back in the day, “oh, this I gotta see,” then you might really enjoy a walk down Mongo’s dark streets. This is hard-boiled, even noir crime fiction the like of which you’ve never seen. 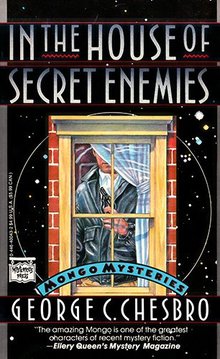 Chesbro actually makes this work. Mongo’s reality is only slightly exaggerated, only mildly off-kilter. A willing suspension of disbelief will carry you past the first few pages, and after that, everything feels normal to you.

The front cover blurb lets you know what you’re in for right away “Raymond Chandler meets Stephen King” pretty much sums things up. And, pretty much lets you know why Fantasy, SF or Horror genre readers might want to give these books a look. I’ll warn you though, these are heavy on the crime/thriller/suspense end of the spectrum, and aren’t going to appeal to you unless you’re already a crime fiction fan.

One of the most intriguing things about the Mongo mysteries is how Chesbro uses scientific and paranormal discoveries in much the same way an SF or Fantasy writer would. He takes a discovery and sees where he can run with it, extrapolating problems and wonders, not just using science to solve the crime. He has a way of examining how such phenomena can impact on the world that’s very reminiscent of what we see in our own genres.

Mongo himself has no supernatural powers or abilities, but he keeps coming across cases which involve things like telepathy, witchcraft, mind control, telekinesis, and so on. His perspective, therefore, is quite a bit “stranger in a strange land” as he discovers that the world he lives in isn’t limited by his own understanding of things. 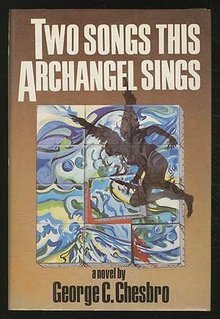 Chesbro’s also got some of the best titles in the business, from the simplicity of the standalone novel Bone, to the more complex Mongo titles like Shadow of a Broken Man, The Language of Cannibals, Dream of a Falling Eagle, or The Cold Smell of Sacred Stone.

If some of the scientific knowledge in the books, or some of the attitudes towards paranormal phenomena are a bit dated, we shouldn’t be surprised. After all, some of these books are close to 40 years old. There are some flaws, however that can’t be explained away by publication date, or obscured by pacing and suspenseful plotting. Mongo delays things and puts off potential informants by being a wise ass a little too often. Once in a while a plot turn will lead you to that deadening question “why didn’t they just ask so-and-so?” The explanations are usually there, but they’re not always completely satisfactory. Sometimes the language is a little too heavily “hard-boiled,” verging on parody, and that can be a bit off putting.

Having said that, The Mongo Mysteries are a lot of fun, and I’d recommend them to anyone who’s looking for a fast ride with a tough guy.

I love the Mongo books, particularly the first one I ever read, The Beasts of Valhalla. I remember scrounging the local library and using interlibrary loan to get some of the others over the years. I read not too long ago that a HBO series based on the books was possibly in the works, possibly starring Peter Dinklage as Mongo. Possibly.

BH: I felt much the same way. Beasts of Valhalla is the only one of the earlier books I don’t own, so I had to borrow it from a friend. I also heard the rumours about a series, but they’re fairly old now, so I’m not holding my breath

I used to read a Mongo mystery or three for a number of years, late ’80s to early ’90s. I remember the first one I discovered, City of Whispering Stone, in my dentist’s office (part of my local library’s “unlimited loan” program for their extra copies), and I stayed with the series up through #11, Dark Chant in a Crimson Key. (And, yes, isn’t that a *great* title?) I never made the leap into the Veil or Chant books, either, despite liking both of those characters (Veil “Archangel” Kendry, John “Chant” Sinclair).

@Eugene: That’s around the time I was first reading them. I made it as far as An Incident at Bloodtide, another good title. In fact, I’d think it would be faster to pick out the titles that aren’t great.
I did read two of the Veil books, but never got into the Chant books either.

@Blacvk Hood:
Here is an article about the proposed series:
http://entertainment.time.com/2014/02/25/hbo-peter-dinklage-beasts-of-valhalla/
Its kind of old though (2014)

@ peer: thanks for this link. I hadn’t seen this one, I was only aware of the original plan for a movie.

I will watch Peter Dinklage do anything. If he wants a Mongo the Magnificent series, I’m there.

@Sarah: I’m with you. I think the original plan for a Mongo movie/series was being bandied about soon after he did The Station Agent, or maybe around the time of Threshold. At least that long ago, anyway.

Links can be found on the George C. Chesbro website, which I run.