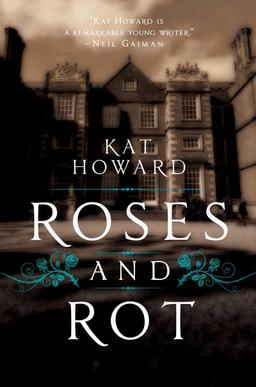 I enjoy a good fairy-tale retelling, especially those written with a modern sensibility — and a dark edge. Kat Howard’s debut novel, selected by Publishers Weekly as a Best Sci-Fi/Fantasy/Horror Novel of Summer 2016, looks like it fits my criteria nicely.

The marketing for Roses & Rot includes an enviable blurb from Neil Gaiman (“Kat Howard is a remarkable young writer”), and the promise that its main characters, Imogen and her sister Marin, find themselves living in a fairy tale as the story unfolds. But which fairy tale? Ah, that’s part of the mystery.

A prestigious artists’ retreat holds dark secrets as desire for art and love are within grasp for Imogen and her sister, Marin, but at a terrible price.

What would you sacrifice for everything you ever dreamed of?

Imogen has grown up reading fairy tales about mothers who die and make way for cruel stepmothers. As a child, she used to lie in bed wishing that her life would become one of these tragic fairy tales because she couldn’t imagine how a stepmother could be worse than her mother now. As adults, Imogen and her sister Marin are accepted to an elite post-grad arts program — Imogen as a writer and Marin as a dancer. Soon enough, though, they realize that there’s more to the school than meets the eye. Imogen might be living in the fairy tale she’s dreamed about as a child, but it’s one that will pit her against Marin if she decides to escape her past to find her heart’s desire.