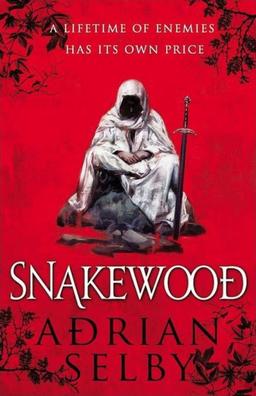 Here’s an interesting little artifact. Snakewood, a debut fantasy of “betrayal, mystery, and bloody revenge,” tells the story of the Twenty, a band of mercenaries being hunted down one-by-one by an unknown killer.

What’s really fascinating is the plant-based magic system. The author says “Snakewood is set in a world where magic is in the plant-life, concoctions of which, known as ‘fightbrews’, radically transform the capabilities and appearance of warriors at a terrible cost.” It arrives in hardcover next week from Orbit Books.

A Lifetime of Enemies has its Own Price

Mercenaries who gave no quarter, they shook the pillars of the world through cunning, chemical brews, and cold steel.

Whoever met their price won.

Now, their glory days are behind them. Scattered to the wind and their genius leader in hiding, they are being hunted down and eliminated.

That sounds nice. I am not usually a fan of magic items, but superpower drug potions always facinate me.

That’s a fairly specialty interest. 🙂 If you pick up a copy, drop by to let us know what you think.

Ooooh, this may well be ticking a few boxes. As I started to read John’s post I couldn’t help but think Black Company. Unfair to draw an advance parallel though so I will have to pick this one up.