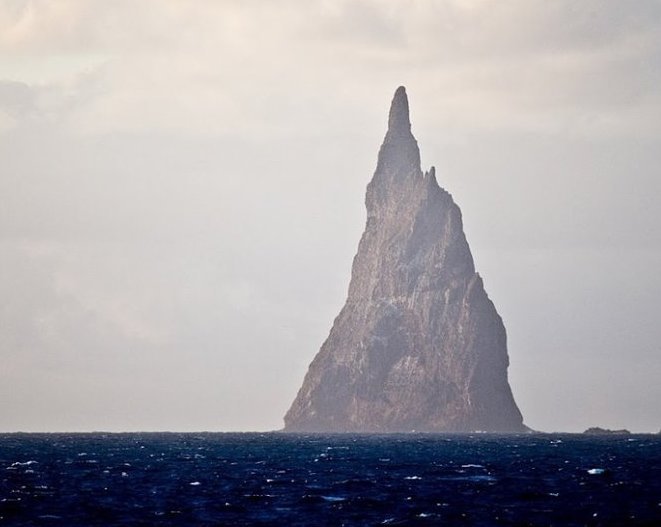 Four years ago, NPR’s Robert Krulwich’s wrote an in-depth feature on the astounding discovery made by a determined group of Australian scientists who scaled Ball’s Pyramid, the fragment of an ancient volcano that juts out of the South Pacific off the coast of Australia (that’s it above. What did I tell you? Monster Island). Climbing that crag of rock in the middle of the night, the scientists discovered a tiny colony of Lord Howe stick insects, Dryococelus australis, or “tree lobsters,” the heaviest flightless stick insect in the world. Tree lobsters were native to Lord Howe Island, and were long thought extinct. 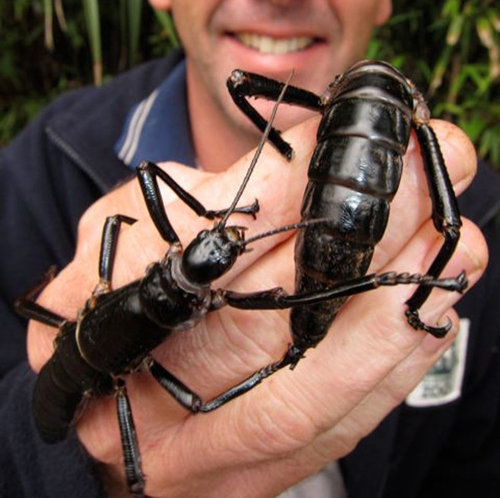 Dryococelus australis were plentiful on Lord Howe’s island up until around 1918, when a supply ship from Britain, the S.S. Makambo, ran aground, disgorging some of its complements of black rats. Two years later, rats were all over the island, and the Dryococelus australis — and some of the other fragile native life on the island — was gone forever.

Or so we thought. Until two Australian scientists, David Priddel and Nicholas Carlile, heard reports that climbers scaling Ball’s Pyramid in the 1960s had seen stick insect corpses on the rocks that looked “recently dead,” and decided to investigate.

From the water, they’d seen a few patches of vegetation that just might support walking sticks. So, they boated over. (“Swimming would have been much easier,” Carlile said, “but there are too many sharks.”) They crawled up the vertical rock face to about 500 feet, where they found a few crickets, nothing special. But on their way down, on a precarious, unstable rock surface, they saw a single melaleuca bush peeping out of a crack and, underneath, what looked like fresh droppings of some large insect.

Where, they wondered, did that poop come from?

The only thing to do was to go back up after dark, with flashlights and cameras, to see if the pooper would be out taking a nighttime walk. Nick Carlile and a local ranger, Dean Hiscox, agreed to make the climb. And with flashlights, they scaled the wall till they reached the plant, and there, spread out on the bushy surface, were two enormous, shiny, black-looking bodies. And below those two, slithering into the muck, were more, and more … 24 in all. All gathered near this one plant.

After much debate, four specimens were removed from the island and taken to Melbourne Zoo to attempt a breeding program. And yesterday, Mr. Krulwich updated his 2012 article with the results, including a terrifying video of a Lord Howe stick insect hatching. Watch at your own risk.

I am afraid I must agree – it looks like the Beginning of the End! The foolish scientist even looks a bit like Peter Graves. I wonder how long it will take these monster insects to reach Chicago …

While I am not keen on creepy crawlies this really has to be a huge good news story. To have a species “return” from extinction. One does live in hope these don’t find their way into illegal animal trade.

But just the story of trying to find these. Dangerous boat trip, shark infested waters, add a small colony or orcish pirates and Monster Island 100%

According to every monster movie I’ve ever watched, about 48 hours.

Indeed. I just want to know why these scientists are risking their lives to find extinct insects, when they should be looking for extinct dinosaurs. If they had their priorities straight, I’d be standing in line at Jurassic Park right now.

Good point John,
Never send an entomologist to do a palaeontologists job.

Gees! That is one big bed bug!