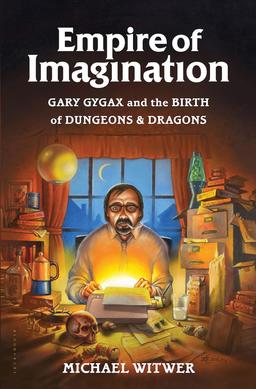 In a lengthy and sometimes rambling article for The New Yorker, Jon Michaud reviews Michael Witwer’s new biography Empire of Imagination: Gary Gygax and the Birth of Dungeons & Dragons, with particular focus on the anti-D&D satanic scares of the late 70s, and the apparently surprising fact that Gygax was a practicing Jehovah’s Witness. Ultimately though, he finds Gygax a worthy subject for a 320-page biography.

Gygax was an ur-nerd who not only changed the way games are played but who also endured a tumultuous business career that, in the right hands, could make as compelling a story as that of Steve Jobs. He was a high-school dropout who lost his father when he was still young, never had a driver’s license, married early, had six children, two wives, turned an obsession with military war-gaming into a worldwide phenomenon, started a successful company from which he was later pushed out only to return and then be bought out once again. Following a well-trodden path, he went to Hollywood, where he briefly prospered, snorting cocaine and hosting pool parties at King Vidor’s mansion, before failing, miserably, to get a motion picture made. His influence can be seen in everything from video games to The Hunger Games. Like Debbie in Jack Chick’s Dark Dungeons, Gygax, who died in 2008, made his way back to God at the end of his life, writing in January of that year, “All I am is another fellow human that has at last, after many wrong paths and failed attempts, found Jesus Christ.”

Just cause I am nerdy and you mentioned Jack Chick…

Here is a link to the Dark Dungeons movie that was funded on kickstarter
http://www.darkdungeonsthemovie.com/

Kent David Kelly wrote a six book history on Dungeons and Dragons. I haven’t read it all, but there seems to be quite a bit of info on the early years of the game.

They’re all free via kindle unlimited.