Steven E. McDonald is a Jamaican author who published a couple of stories in Analog and Asimov’s in the late 70s and early 80s. His first novel, The Janus Syndrome, was published in 1981.

I’m sure there were other SF or fantasy novels featuring a black male protagonist on the cover by 1981, but I can’t remember any. (F. M. Busby published Zelde M’Tana, featuring a black heroine on the cover, in 1980, and John Brunner wrote the first of his Max Curfew spy novels, A Plague on Both Your Causes, way back in 1969, but they weren’t science fiction.) As far as I know The Janus Syndrome broke the color barrier, at least among mainstream paperback SF publishers. It’s the first time I remember seeing a black hero so prominently on a cover, anyway.

Unfortunately, it didn’t sell. The Janus Syndrome did not usher in a new era of color diversity on SF paperbacks, and that’s a pity. There were no more novels featuring “the outrageous hero” Kevven Tomari from Bantam Books, or anyone else. 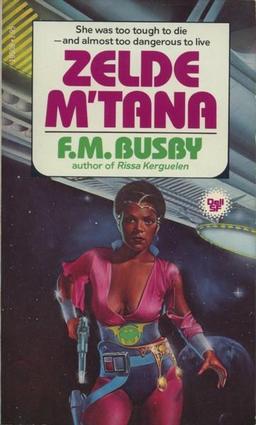 I’m sure there’s plenty of reasons for the failure of the The Janus Syndrome, but chiefly I blame science fiction fans — myself included. I was 17 years old in 1981, already spending a good chunk of my disposable income every week on science fiction paperbacks. I never saw a copy on bookstore shelves in 1981, and I assume that’s due to poor distribution. But even if I had, I doubt I would have bought it. I almost certainly would have seen a prominent black character on a book cover as a statement… and at 17, I avoided anything that looked like a statement.

Really, it was prejudice, plain and simple (although I would have been very insulted at that accusation in 1981). I think it took Samuel R. Delany and Octavia Butler to teach me that black protagonists in SF weren’t “statements” — they were just characters, as fascinating and flawed as everyone else. Embarrassing I didn’t really internalize that lesson until my late teens, but there it is.

We can accuse publishers, and the industry, of being slow to put people of color on book covers all we want (and there’s no question they have been, even today). But I’m enough of a capitalist to know that publishers follow the market. Change starts with buyers. I try to remember that when I’m picking my selections at bookstores, even in 2015.

It was sixteen years before Steven E. McDonald tried his hand at another science fiction novel. He wrote the novelization for Event Horizon in 1997, followed by two more media adaptions: Supernova (1999) and Gene Roddenberry’s Andromeda #3: Waystation (2004).

Imaro by Charles Saunders comes to mind, albeit with an African hero illustrated by Ken Kelly that looks suspiciously like a white guy with dark brown skin…

The one cover that leaps to my mind would be Brad Holland’s cover for A Time of Changes (1971) by Robert Silverberg, even if the character depicted may be more Australian than African. Sure ain’t Euro, though.

Charles R. Saunders lived in my home town of Ottawa, and the local SF club I was part of made a big fuss over his first novel. First time I met him was during a reading he gave to our club (I still remember his opening joke… he said he was on a seafood diet. If he sees food, he eats it!)

You have a good memory. I’m not even sure I’ve ever seen this cover before. Brad Holland’s cover was on the hardcover edition: 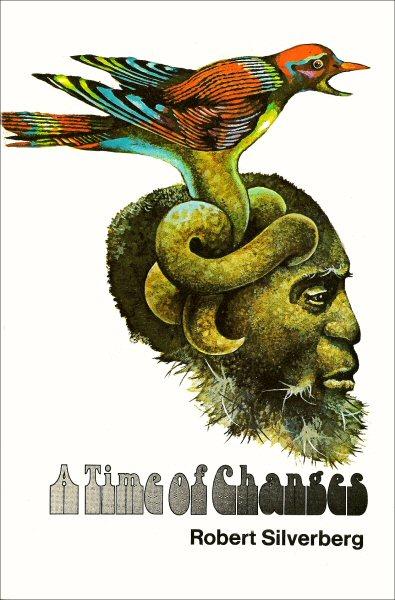 The first cover I saw was Gene Szafran’s very green piece for the Signet paperback, which whitewashed the entire cast: 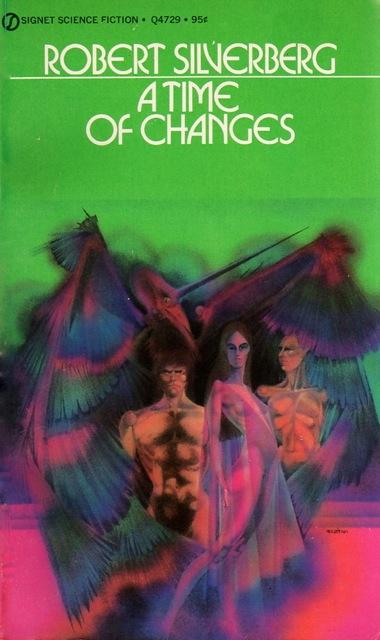 Paul Alexander’s cover for the 1979 Berkley reprint is a better cover, but agan depicts the main character as white: 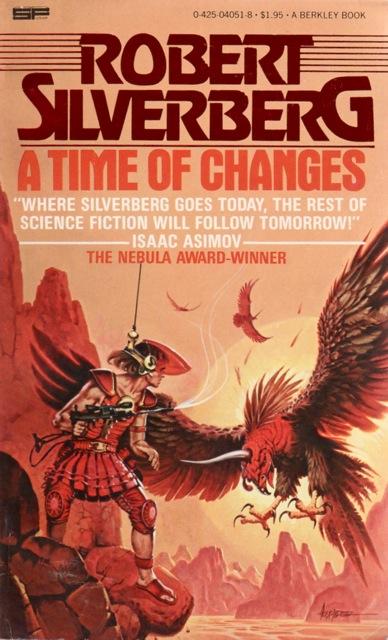 To be fair to the cover artists, I’m not at all certain Silverberg gave any real hints to the race of his protagonists in A TIME OF CHANGES. Lord Kinnall Darival, the exiled prince of Salla, doesn’t use the peronal pronouns “I” or “me”, and his culture forbids sharing deep emotions, and this was the main thrust of the book.

Well, maybe… but Blaxploitation peaked in the mid-70s and was pretty much dead by 1981. And it was chiefly a subgenre of film. What makes a book cover “blaxploitation,” exactly? A strong black character?

If nothing else, that’s the least-effective pressure suit I’ve ever seen — kind of the male version of Milla Jovovich’s outfit at the beginning of The Fifth Element.

True enough. It’re more effective than the suits of the young women behind him, though.

[…] Blackness (Black Gate) Vintage Treasures: The Janus Syndrome by Steven E. McDonald — “I was 17 years old in 1981, already spending a good chunk of my disposable income […]