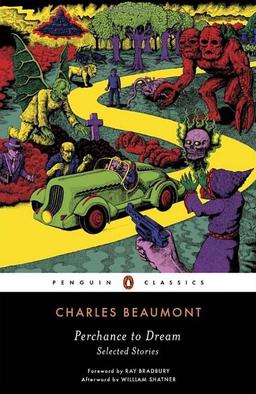 Charles Beaumont authored several highly regarded short story collections, including Yonder: Stories of Fantasy and Science Fiction (1958), Night Ride and Other Journeys (1960), and The Magic Man and Other Science-Fantasy Stories (1965), and was also the screenwriter for a number of classic horror films, including 7 Faces of Dr. Lao, The Intruder and The Masque of the Red Death. But he’s best remembered today as the writer of some of the most famous Twilight Zone episodes, including “The Howling Man,” “Miniature,” and and “Number Twelve Looks Just Like You.” Perchance to Dream: Selected Stories is a new collection of his classic tales, with a foreword by Ray Bradbury and an afterword by William Shatner. Shatner’s piece recalls meeting Beaumont when he was cast as the lead in The Intruder, and their misadventures on the set together.

It is only natural that Charles Beaumont would make a name for himself crafting scripts for The Twilight Zone — for his was an imagination so limitless it must have emerged from some other dimension. Perchance to Dream contains a selection of Beaumont’s finest stories, including five that he later adapted for Twilight Zone episodes.

Beaumont dreamed up fantasies so vast and varied they burst through the walls of whatever box might contain them. Supernatural, horror, noir, science fiction, fantasy, pulp, and more: all were equally at home in his wondrous mind. These are stories where lions stalk the plains, classic cars rove the streets, and spacecraft hover just overhead. Here roam musicians, magicians, vampires, monsters, toreros, extraterrestrials, androids, and perhaps even the Devil himself. With dizzying feats of master storytelling and joyously eccentric humor, Beaumont transformed his nightmares and reveries into impeccably crafted stories that leave themselves indelibly stamped upon the walls of the mind. In Beaumont’s hands, nothing is impossible: it all seems plausible, even likely.

Perchance to Dream: Selected Stories was published by Penguin Classics on October 13, 2015. It is 336 pages, priced at $16 in trade paperback, and $9.99 for the digital edition.

If the word “classic” as applied to books is to recover its value, it needs to be reserved for works that have proven their worthiness by appealing to more than the present generation of readers, and that are by authors who have died. Until recently, the Penguin Classics series adhered to this understanding. Regrettably, recently Penguin has opted for a more emotive usage of “classic” as has included works by living authors in the Classics releases. The word is thus devalued, though the move might be good for sales.

As for Beaumont — he’s dead all right, and interest in his writing has remained, so it might be argued that his stories could be included in a series of “classics.” Penguin hasn’t helped their case with those who believe the ascription of “classic” should be undertaken with a little caution, by including an afterword by William Shatner. Was it their thought that he was an accomplished performer in belles-lettres thanks to Tekwar, etc.?

It’s a peculiar situation — that DeLillo, Beaumont, Ligotti, and others rushed into print in a series whose first issue was a translation of Homer and which has been the entrance into world literature for many readers who in its pages have for the first time read Dickens, Balzac, the Brontes (all three sisters), Melville, Poe, Malory, Spenser, Tolstoy, Marco Polo, et al.

Literally “peculiar” — i.e. it relates to the peculiarity of our time, which is given to asserting the great value of its favorite TV shows, movies, and other popular entertainments, as if (since we like them) their greatness must be proclaimed to all. Hubris, I think.

> Penguin hasn’t helped their case with those who believe the ascription of “classic” should be undertaken with a
> little caution, by including an afterword by William Shatner. Was it their thought that he was an accomplished performer in
> belles-lettres thanks to Tekwar, etc.?

Have to disagree, I’m afraid. Penguin punched the literary card with the Bradbury Foreword. For the Afterword, I’m looking for someone who can share some genuine insight on Beaumont’s most significant contributions — i.e. his film and TV work. That means someone who worked with him, is still around, and who is also a writer (and preferably a household name).

Shatner fits all those criteria… but most important of all, he wrote a terrific Afterword, a thoughtful reminiscence on what it was really like to film THE INTRUDER with Charles Beaumont in the South in 1962, and his rapid deterioration and death from an unknown disease a few years later. (Shatner writes: “I guess he went through senescence in whirlwind time. It’s like a science fiction story he would have written. Charles Beaumont, wonderful, active, virile, creative writer, dies of old age in his thirties.”)

You can read the entire thing using Amazon’s “Look Inside” feature (scroll to the back of the book).

I just glanced through this at a friend’s house last night, and I’m on your side, John. The Shatner afterward was appropriate and quite well done, and for just the reasons you cite.

I think “classic” can be used descriptively and normatively.

Descriptively, it’s attached to works who have stood the “test of time”. Though that’s a vague sort of test, I think there are some works that fall clearly within it.

Normatively, “classic” is attached to works that should be given consideration by people and thus be put up against the so-called “test.” Perhaps we’ll see that the editor/publisher’s normative claim is incorrect and thus the work will return to the obscurity it had. Or, perhaps in some cases we will end up agreeing that the work in question as past the test and now the word “classic” can be applied as an accurate description.

I think Penguin is the perfect testing ground for these attempts. Since these editions are often used in high school or college classes, they can operate as testing grounds for today and future readers’ understanding of “classic”.

And as long as Penguin only puts forward works that are genuinely worthy of consideration, and even if they fail the classic “test”, I don’t think this will hurt Penguin’s reputation in terms of being good judges of what counts as “classic”.

I didn’t actually expect anyone to agree with me, and in any event my first message had several slips needing correction before being sent; so I can hardly blame anyone for being irritated by it. But it doesn’t seem that anyone was, at least so much as to show it in a rude response. Thanks for the comments.

Though in spirit my post was something of a disagreement, I’m also sympathetic to more of a hard line concerning what counts as classic.

In a day and age where “classic” refers to just about anything over three months old, I’m extremely congenial to being feisty about what counts as classic.

For instance, I would be completely on your side if, say, the Library of America was coming out with a new Beaumont edition (assuming he’s an American). As great as Beaumont might be, I hardly think ANY of his works count as American classics.

Penguin “classics” I see as more flexible. When I see a fairly new book in this line, I see it as more of a proposal than a pure description claiming classic status for the work in question.

Who did that cover? Really incredible.

> Who did that cover? Really incredible.

I agree… and I wish I knew. Once I find out, I’ll post the cover credit here.