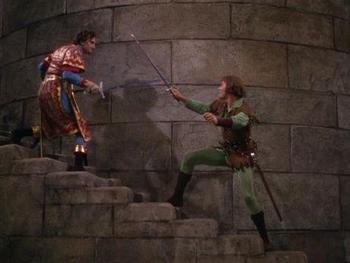 In my book Swordfighting for Writers, Game Designers, and Martial Artists, I devote about 45 pages to advice to writers. I thought the readers here at Black Gate might like me to expand a bit on some of the points I made there. Let me start with a quote:

There are several distinct skills that go into a good written fight. They are:

Dramatic tension, characterization, and plot are key skills for a novelist; ask M. Harold Page if you don’t believe me. Visualizing a swordfight accurately is a much less common writing skill.

Assuming that training in actual swordsmanship for a few years is out of the question, here are three ways to get it right, if you want to go into technical detail (which blade goes where).

1) The absolute best way to do this is to get a friend and a couple of sticks (or swords!), and go through it live. This will prevent your sword magically jumping through your opponent without actually cutting him in half, or from striking in two places at the same time (both errors I have encountered in published fiction).

In the absence of friends or sticks, what can you do?

2) The next best option is to cheat. Pick a movie with a sword fight in it that would work for your scene, and go through it frame by frame, and describe what you see. By all means make some changes, but Picasso was right: good artists borrow; great artists steal.

3) Last and very much least: work it out in your head. This is what most writers do, I think. You can make this a bit more reliable by using a pencil in each hand and fighting yourself, but the results will be spotty at best.

Once you have it written down, I’d suggest sending it to someone who does actually fight with swords. MHP, me, there are many of us out there. 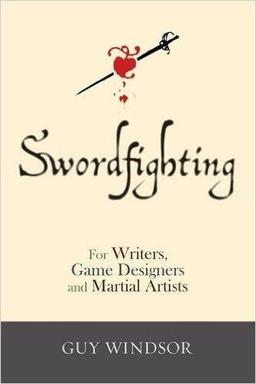 But my Number 1 top tip for writing swordfights? Avoid technical description altogether. Your average reader does not want to know exactly which bit goes where; she wants to know why they are fighting, what the stakes are, and how the fight is going. Technical descriptions of what the swords are doing are usually pretty tedious. For example:

Alfonso the Evil One forced Our Hero back across the tavern with a flurry of cuts and thrusts, until OH bumped into the bar. Ever resourceful, OH snatched up a flagon of ale and threw it into AEO’s face. The leather vessel bounced harmlessly off A’s forehead, but cheap acid brew stung his eyes, and he backed off for a crucial second. OH recovered and thrust hard at A’s belly etc etc…

Alfonso the Evil one attacked Our Hero with a mandritto fendente to the head; OH parried, but in the tempo of his parry, AEO cut around with a roverso fendente. OH stepped back to gain time to make a second parry, but AEO was so fast, that even after his roverso fendente was parried, he had time to thrust at OH’s face… dammit, we are still a long way from that beer, and I’m bored already!

So my Number 2 top tip: avoid jargon. How many of your readers know what a mandritto fendente is? (It’s a forehand descending blow). And “in the tempo of his parry”? Sure, you can figure it out, but while you’re figuring, you’re not caught up in the drama.

If you have found this useful, and you want more top tips (and perhaps want to know how the fight continues) let me know in the comments; I have a lot to say about swords and swordfighting…

Guy Windsor is a professional swordsman and writer; he founded The School of European Swordsmanship (www.swordschool.com) in 2001, and his first book was published in 2004. Find him at guywindsor.net/blog.

I’ve always been partial to the way Edgar Rice Burroughs described John Carter’s (many, many, many) engagements — he didn’t get caught up in detail, but managed to keep the excitement level high.

I appreciate this post on many levels. I’m not sure where to start.

I would offer a small quibble with Tip #2: Avoid jargon, as a bit of jargon can serve some of your earlier skill points, particularly “maintaining characterization”. Richard St. Vier in Swordspoint by Ellen Kushner is a professional duelist and so seeing a sword fight from his perspective makes the sprinkles of jargon that Ms. Kushner uses a plus.

Eugene; yes, you are right: beginners learn the rules, intermediates apply them in interesting ways; experts bend, break or ignore them. That doesn’t invalidate the rules though.
Swordspoint is a great book 🙂

@Joe H: ERB actually used proper wrestling techniques in his stories and has at least one instance of a small sword hand parry – he just had the knack of throwing in the details when they were needed, not otherwise.

@Guy – You forgot to mention Youtube as a source of borrowable fights. Stick in “HEMA” and your chosen weapons.

Yeah, Burroughs could go into detail when it would help the dramatic impact, but didn’t need to include every cut, thrust and parry.

(And now I’m trying to remember exactly how much detail Dumas gave to the swordplay in the Musketeers books. And I also second (or third) the recommendations for Swordspoint.)

Sebastien de Castell does an especially fine job of weaving fight choreography with characterization, worldbuilding, narrative voice, and overall plot. From a storytelling perspective, I think he’s a master. I’d love to know what readers who really know sword fighting think of him. For his day job, he choreographs combat for stage productions, so I’m assuming he knows what he’s talking about. I don’t have the specific knowledge to be sure, though.

This is timely. I’ve recently read one of Mr. Windsor’s books, and have two more in my waiting-to-be-read pile (including “Swordfighting”).

Thanks for the article, and yes, I’d love to see more of them.