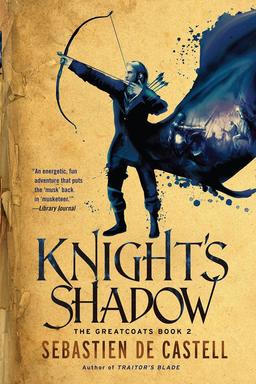 When I reviewed the first book in the Greatcoats series, this was my conclusion:

Is Traitor’s Blade destined to be a classic? Well, that’s a kind of question I ask myself about books I can get some distance from. I don’t want any distance from this book. What I want, just as soon as I finish writing this review, is to read Traitor’s Blade again, immediately. And maybe once more right after that.

Now that I’ve read the second book in this planned series of four, I’m pretty sure de Castell is carving himself an enduring place in the fantasy canon.

Usually when a new author stumbles after a stellar debut, it’s on the second book. I wondered whether I’d see that play out here… right until I read the first page. Then I forgot I was wondering or worrying or writing a review, because the stalwart, somewhat cracked hero Falcio Val Mond was tugging me back into his story. I’d follow Falcio anywhere. Okay, so he’s an idealist in a world that despaired of those ideals years ago, and he’s slowly dying from a little poisoning incident in the last book, but his berserker episodes are much improved, and he hardly ever froths at the mouth anymore.

And he makes us laugh, raucously, especially in the bleak moments when he and we need it most. Yes, I’d definitely still follow him anywhere. In the spirit of lively and surprising storytelling, though, in this volume, some of Falcio’s friends and allies stop being so sure they can do the same.

When Falcio’s king died — and his dream of a nation ruled by laws rather than men all but died with him — the duchies of Tristia began to devolve into a failed state. In Traitor’s Blade, one dangerous duchess set out to put her daughter on the empty throne. But Falcio, First Cantor of the Greatcoat magistrates, found the king’s hidden heir, and now the duchies are picking sides for a civil war.

In Knight’s Shadow, Falcio sets out with his best friends from childhood and fellow badass magistrates Kest and Brasti to bring the southern duchies to side with the old royal line. The dukes and ducal knights enjoy the absolute power they wield in their little fiefdoms, and none of them want to see a monarch bring back the meddling Greatcoats, who enforced the King’s Laws on the great as well as the small. Our heroic trio may be tattered and brought down in the world, but they’re still daunting.

Everyone knows laconic Kest is the greatest swordsman in the world. Ne’er-do-well Brasti’s the greatest archer. It’s Falcio, though, who makes those warriors lawmen. Falcio, with his mind at once devious and earnest, puzzles and tricks and truthtells his way through every trap. He wins a thousand small victories, even as he watches the great war turn against him. And for every victory, however small, he will pay a terrible price. (For readers with PTSD, I must add that the torture scenes in this volume are even harder going than the ones in the first book. They’re necessary for the story, perfectly rendered, and suffused with the author’s basically compassionate vision, but for some readers the visceral immediacy of the scenes’ details may be a deal-breaker.) 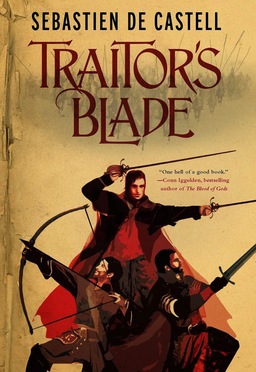 Falcio’s every attempt at diplomacy takes a truly unpredicable turn. One duke dares him to bring the King’s Laws back to a village of scofflaw farmers, to prove that law isn’t just a tool for keeping the aristocracy down. Is the law really for everyone, even if enforcing it could cost the royal heir the support of the peasants? Another duke leaves Falcio a cryptic message that he’s not meant to understand in time to stop a massacre. A third duke, Falcio’s mortal enemy, begs him for help — because someone is trying to kill off all the ducal families, and the duke’s only child must be rescued from the dungeon where, not long ago, that same duke sent Falcio to be tortured. It’s not a classic dungeon crawl, but readers who like that kind of thing will find a satisfying frisson of subterranean claustrophobia, with mortal peril around every turning of the torchlit passageway.

And what about the hidden player who’s trying to wipe out the dukes and their lines forever? Are they friend to the royal heir Falcio serves, or foe? More importantly, are they misguided servants of the King’s Laws? Falcio knows only two fighting orders formidable enough to have made these attempts. One is the Greatcoats themselves, and he fears that the perpetrators may be some of his disbanded fellow judges. The other is the mysterious order of Dashini assassins, about whom more is revealed than I had imagined I would ever see on the page. Somehow de Castell offers big reveal after big reveal, yet at the book’s end I still had a sense of even deeper mystery about the Dashini. Even after all those revelations, the truth about the assassination attempts is more tangled than any of Falcio’s early guesses.

One of the great pleasures of Knight’s Shadow is that the worldbuilding deepens, opens outward, flowers. In Traitor’s Blade, the Dashini made only a brief onstage appearance, and otherwise were basically ciphers, bogeymen the Greatcoats feared because so little was known about them. In the new volume, we learn about their tragedies and traumas, and why they were founded in the first place. The Greatcoats themselves had a centuries-long history with a violent end before King Paelis refounded them. Falcio began his life as a peasant and became an unlikely master of laws well into manhood. What the Greatcoats have meant through the life of the country, he is just starting to discover. Other orders, of healing and the arts, that seemed to be merely grace notes in establishing the setting last time around, start coming into their own.

Strangest of all, we begin to see the sacred cosmology that underpins Tristia. We knew there were gods and saints, and that some saints wandered the earth for centuries after achieving sainthood. Who those gods were, and what constraints bound those saints, we only now begin to learn. Sainthood is a terrible burden, its own kind of tragedy, and because Falcio, Kest, and Brasti have pursued their particular excellences so far and so hard, it’s a tragedy they all risk. One of the perils of approaching too close to sainthood is that, the more each of the three men becomes himself, the harder it is for them to hold together as the smoothly-oiled three-part invention they were at the beginning of the series. The gods, it is said, protect only the dukes. Certainly the gods don’t seem to be intervening for anybody else in Tristia. What’s the truth about the gods? I think we’ll find out in the next two books, and I expect that truth to be inventive, entertaining, and full of troublesome implications for our heroes.

Like Traitor’s Blade, Knight’s Shadow ends on a note that could still be satisfying if the series ended right now. One hazard of series fantasy is an endless episodic structure in which boundaries between volumes can feel arbitrary, owing more to publishing schedules than to any organic structure in the story. I don’t even need to say, I’m looking at you, George R. R. Martin, because Martin has been so forthright about this problem. It’s one problem you won’t find in de Castell’s work. Each of the two books now before us has a clear beginning, middle, and end. Bridging the gaps between one book’s ending and the next’s beginning, we find a victory, but not a final victory. Falcio and his companions have saved their country from dangers that, many times, seemed insurmountable. They have their moment to marvel together that they have made it this far, brought this much hope to a land that had none. And then they ready themselves for the next act, because Tristia has fallen far, and needs more help than any hero should be asked to give.

Knight’s Shadow is so strong, the only way I can see the Greatcoats series failing to achieve eventual wide recognition as a classic is if the author meets an untimely demise before he finishes writing it.

Live a long life, Sebastien de Castell. Cross carefully when you see the city bus, and take your vitamins. Don’t pull a Karl Edward Wagner. A long and prolific life, yes, that would be best for everyone.

Sarah Avery’s first short fiction collection, Tales from Rugosa Coven, is a finalist for the 2015 Mythopoeic Fantasy Award. A trio of linked contemporary fantasy novellas, the collection follows the adventures of some very modern Pagans in a supernatural version of New Jersey even weirder than the one you think you know. The Trafficking in Magic, Magicking in Traffic anthology she coedited with David Sklar includes stories from James Enge, Elizabeth Bear, and Darrell Schweitzer. Avery’s short story “The War of the Wheat Berry Year” appeared in the last print issue of Black Gate. Other stories have appeared in Jim Baen’s Universe and Fantasy Scroll Magazine. Later this year, she will launch a Kickstarter campaign to self-publish a related novella, “The Imlen Bastard.” You can keep up with her at her website, sarahavery.com, and follow her on Twitter.