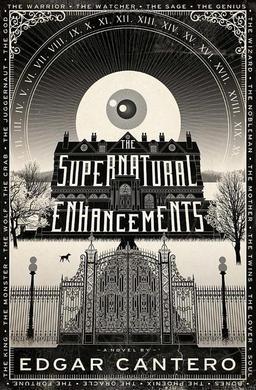 I stumbled on Edgar Cantero’s debut novel on Amazon as a bargain book, and I ordered it based on the captivating plot description (and, I must admit, because of the giant eyeball on the cover… I think it looked into my very soul.)

The Supernatural Enhancements begins as a gothic ghost story, and soon evolves into a twisted treasure hunt and modern-day adventure. Author Justin Taylor (Flings) calls it “Eerie… Cantero pays homage to Bram Stoker and H.P. Lovecraft and The Shining, but he’s no less enamored of The X-Files, fax machines, and punk girls with dreads.” Definitely worth a look, I think.

When twentysomething A., the European relative of the Wells family, inherits a beautiful, yet eerie, estate set deep in the woods of Point Bless, Virginia, it comes as a surprise to everyone — including A. himself. After all, he never knew he had a “second cousin, twice removed” in America, much less that his eccentric relative had recently committed suicide by jumping out of the third floor bedroom window — at the same age and in the same way as his father had before him . . .

Together with A.’s companion, Niamh, a mute teenage punk girl from Ireland, they arrive in Virginia and quickly come to feel as if they have inherited much more than just a rambling home and an opulent lifestyle. Axton House is haunted… they know it… but the presence of a ghost is just the first of a series of disturbing secrets they slowly uncover. What led to the suicides? What became of the Axton House butler who fled shortly after his master died? What lurks in the garden maze – and what does the basement vault keep? Even more troubling, what of the rumors in town about a mysterious yearly gathering at Axton House on the night of the winter solstice?

The Supernatural Enhancements was published by Doubleday on August 12, 2014. It is 353 pages, priced at $26.95 in hardcover and $12.99 for the digital edition. The cover is by Michael J. Windsor. A trade paperback edition is scheduled for release on July 21; I bought the hardcover new at a bargain price on Amazon.com.

I read this about a week ago. It was in the new books section of the library and the cover art pulled me in as well. It was quite good, it didn’t go where I thought it was heading at all. Thoroughly enjoyable.

Thanks Hood! Good to know we can still rely on great cover art to not steer us wrong. 🙂