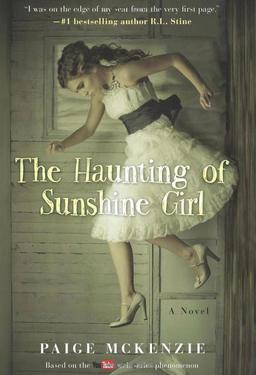 The Haunting of Sunshine Girl is a popular YouTube web series starring Paige McKenzie, created by Nick Hagen and Mercedes Rose. The series focuses of 16-year old Sunshine following her move to Washington state from Texas with her mother, as she enters a new school, meets new friends (and boys)… and discovers her hew house is haunted by a host of malevolent spirits.

The Haunting of Sunshine Girl is the first book based on the web serial, and it has received a lot of attention all on its own. Written by star Paige McKenzie and author Alyssa B. Sheinmel (Second Star, The Beautiful Between), it is the opening book in a promising horror series aimed at young adults.

Shortly after her sixteenth birthday, Sunshine Griffith and her mother Kat move from sunny Austin, Texas, to the rain-drenched town of Ridgemont, Washington. Though Sunshine is adopted, she and her mother have always been close, sharing a special bond filled with laughter and inside jokes. But from the moment they arrive, Sunshine feels her world darken with an eeriness she cannot place. And even if Kat doesn’t recognize it, Sunshine knows that something about their new house is just … creepy.

In the days that follow, things only get stranger. Sunshine is followed around the house by an icy breeze, phantom wind slams her bedroom door shut, and eventually, the laughter Sunshine hears on her first night evolves into sobs. She can hardly believe it, but as the spirits haunting her house become more frightening — and it becomes clear that Kat is in danger — Sunshine must accept what she is, pass the test before her, and save her mother from a fate worse than death.

The Haunting of Sunshine Girl was published by Weinstein Books on March 24, 2015. It is 304 pages, priced at $16 in hardcover and $9.99 for the digital edition. Check out the YouTube series here.