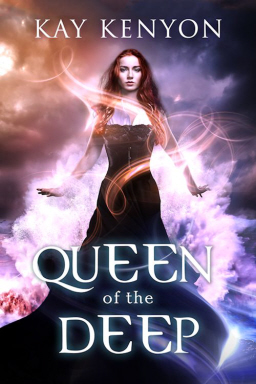 I’ve been a fan of Kay Kenyon for many years. Her SF novels, including The Braided World and the four-volume The Entire and the Rose series, were ambitious and a lot of fun. I was delighted to see her release her first fantasy novel, A Thousand Perfect Things, last year.

I had dinner with Kay at the World Fantasy Convention in November and she really piqued my curiosity with a casual description of her newest fantasy novel, Queen of the Deep. I’ve been waiting impatiently for it ever since, and it finally arrived yesterday. I have a copy in my hot little hands at last, so I hope you’ll excuse me while I retire to my big green chair for the next two days.

On the streets of New York, Jane Gray meets an intriguing man who claims to be the impossible: an imaginary playmate from her childhood: Prince Starling. Determined to know the truth, Jane tracks him into another realm. This is the world of the Palazzo, a magical ship which is both a colossal steam vessel and a Renaissance kingdom. Ruling over its denizens — both human and otherwise — is an exotic and dangerous queen. Jane must find her way home, but the path is hopelessly lost.

Promising romance, the enigmatic Prince Starling and big-hearted crime lord Niccolo vie for Jane’s heart. But she has her eye on the pilot house. Who — or what — guides the Palazzo, and what is the urgent secret of its endless voyage? As a shocking destination looms into view, Jane must choose both a lover and a ship’s course, one that may avoid the end of all things.

Queen of the Deep was published on January 4th by Winterset Books. It is 378 pages, priced at $4.99 in digital format; it is scheduled to be released in trade paper by mid-January. Learn more at Kay’s website.