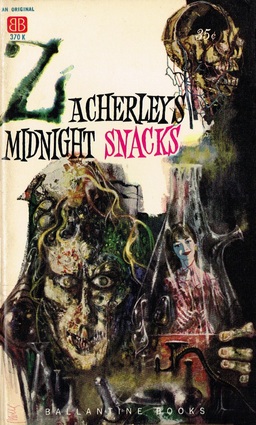 I love the whole goofy premise: a ghoul’s favorite midnight reading. A ghoul named Zacherley. Who comments on each story, with special “cheering notes.” You go, Zacherley.

Of course, it’s in the long-standing tradition of the Old Crypt Keeper, who introduced the horror tales in EC Comics, and Cain and Abel, hosts of DC Comics’ long-running House of Mystery and House of Secrets comics, just to name a few. The cheerful undead storyteller, who delights in a good creepy tale (not to mention the occasional moral fable or two.)

In keeping with the fiction that these stories were selected by a ghoul, the editor of Zacherly’s Midnight Snacks is uncredited. Someone must know who compiled this (and subsequent) volumes for Ballantine, but they’re not talking.

The book collects nine short stories and novelettes from the pulps (“precious old mouldering records”), including Thrilling Wonder, Unknown, Beyond Fantasy Fiction, and Fantastic Universe. Authors include Richard Matheson, Theodore Sturgeon, Wallace West, A. E. van Vogt, and Henry Kuttner. Here’s the blurb on the back of the book:

As choice a brew of ghouls, vampires, ghosts and creatures of EVEN MORE VARIED TALENTS as you could wish to meet, in stories garnered from precious old mouldering records, and with special cheering notes on each by ZACHERLEY.

This volume was released in March 1960. Zacherley managed one additional anthology, Zacherley’s Vulture Stew, released in August the same year, before (presumably) laying down for his eternal rest.

Here’s the complete Table of Contents for Zacherley’s Midnight Snacks:

Ballantine published several horror anthologies in this spirit in the late 50s and early 60s, including Tales to be Told in the Dark (1965) edited by Basil Davenport, The Graveyard Reader (1965) edited by Groff Conklin, and Things With Claws (1961), edited by White and Hallie Burnett.

Zacherly’s Midnight Snacks was published in March 1960 by Ballantine Books. it is 157 pages, originally priced at 35 cents. The cover is by Richard Powers. It has never been reprinted, and there is no digital edition. Copies are fairly easy to find on eBay, and they’re run you $10-$12 in good condition.

Zacherley, was a TV horror movie host from NY during the 50s & 60s. Much like Elvira, and the still active Svengoolie.

Here’s a Wiki link to John Zacherley. In 1960 he was all the rage on a local Philadelphia (my hometown) TV station. He used the name Roland in Philly but when he moved to the Big Apple he went by just his last name. He’s 96 and still makes public appearances. He would cut into the film of the night and do funny bits as if he were actually in the movie. Very innovative guy. I never knew he put out any books. He also cut a record called Dinner with Drac. http://en.wikipedia.org/wiki/John_Zacherle

Thanks John! This is great stuff. I think I would have really enjoyed his TV show as a kid. A pity he was never broadcast in Ottawa!

I was 1st introduced to Zacherley in this 1986 vhs
http://youtu.be/pNg3O03YtHk

I never saw Zacherley, but in the Los Angeles market we had our own horror host, the fondly remembered Seymour (Larry Vincent). His schtick was indescribable. I’d give a fair amount to travel back to 1974 to watch him one more time…

[…] Moon” is a full-on fantasy that would fit perfectly in a favourite paperback I used to own called Zacherley’s Midnight Snacks. It’s a little bit Fritz Leiber-ish, and a lot sui generis. I won’t attempt to describe it […]