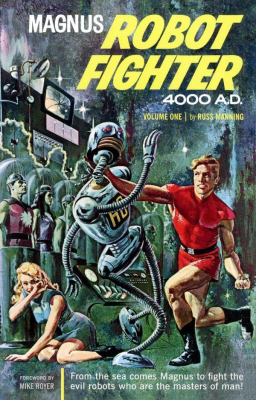 I wheedled hard to get that twelve or fifteen cents (that’s what comic books cost in my day, Sonny), and was determined to be discriminating with it. Yes, even as a kid, I was a snob — a trash snob, but a snob.

Recently, however, in a spirit of scientific investigation, I picked up the first two Dark Horse paperback collections of Magnus Robot Fighter 4000 A.D. The books collect the first fourteen issues of Magnus that Gold Key published between 1963 and 1966. Dark Horse has done a superior job with these beautifully-produced volumes;  in addition to the original stories, they feature appreciative introductions by Mike Royer and Steve Rude, samples of original concept art, and the covers that I so disliked as a kid.

Most importantly, the reproduction of the comic pages themselves is first-rate. The coloring is especially good; it’s clean and sharp without being overpoweringly bright, as some of DC’s Archive books have been. (The non-glossy paper used is a big plus in this regard.)

So the wrapping is nice — what about the present? Who the heck is this Magnus guy, anyway?

Magnus was the brainchild of artist Russ Manning and Gold Key editor Chase Craig. Their idea was for a sort of future Tarzan, a self-reliant hero who would be at odds with the advanced but decadent world around him. In addition to doing the artwork for Magnus, Manning also wrote many of the stories, and for those that he didn’t write, he often provided story ideas or outlines for the title’s other script writers. Setting the series in the far distant future was a key decision; it eliminated pesky problems like politics or plausibility. 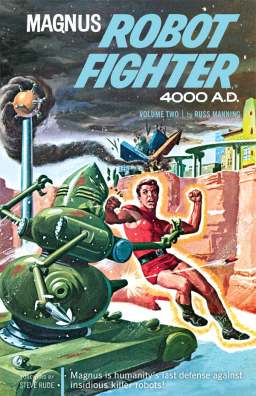 If you have fears for the future, set them aside. By the year 4000, the world will be an automated paradise of leisure and flying cars and Frank Lloyd Wright architecture on steroids. (Google really is telling you the truth.) There is the little problem of mankind’s total dependence on robots, and those robots’ tendency to regularly go berserk…  but that’s where Magnus comes in.

Trained (by a benevolent robot — I know, I know) to such a pitch of physical and mental perfection that he can literally smash through steel with his bare hands, Magnus is constantly being called away from idyllic strolls or relaxing dinners with his girl Leeja (who apparently has only one dress) to put down these troublesome mechanicals. Now it would seem to me that if the robotic problem is this big, punching them out one by one is a singularly inefficient solution, but what do I know? It seems that the world of 4000 A.D is a world of full employment, even for robot fighters.

My anti-Gold Key animus aside, on closer examination at this late date, I find Magnus to be pretty cool. Of course, there are some negatives. The stories are mostly lame (to call the characterization wooden is to insult your fireplace log), and making our hero a robot fighter pretty much limits him to… fighting robots. This does make the stories a bit repetitive, but on the plus side, Manning was really good at showing his hero pounding rebellious machinery into scrap. (I especially like the way the robots go Squeeee! when Magnus belts them; I just can’t get enough of it.)

The only non-mechanical thorn in Magnus’s side is the arch-villain Xyrkol, who is always causing trouble by trying to — you guessed it — conquer the world by subverting the robots.

Believe it or not, the goofiest thing about Xyrkol isn’t his name, which looks like a bad Scrabble draw — it’s his appearance; the combination of a blonde flattop haircut, a bushy beard, and a lush mustache that seems to be growing right out of his enormous nostrils is distinctive, to say the least. He also has a build like Ernest Borgnine, which means that try as he might, nothing really looks good on him. Here, see for yourself. 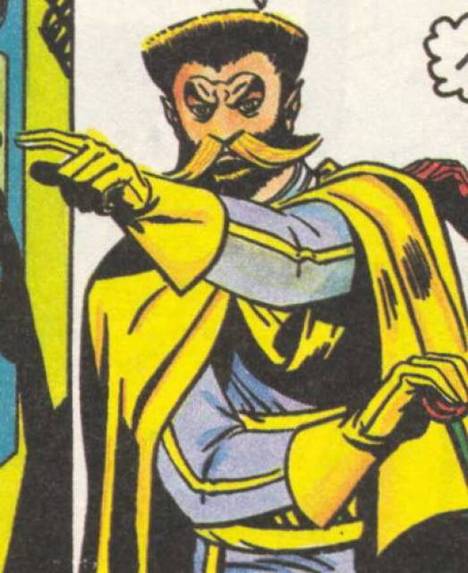 These are minor quibbles. The stiff characters and clunky plots do relatively little damage to the project, because the real reason to read these stories is Russ Manning’s artwork. It’s extremely crisp and clean, and is a fun visualization of the future as seen from those optimistic days of the early 60’s. 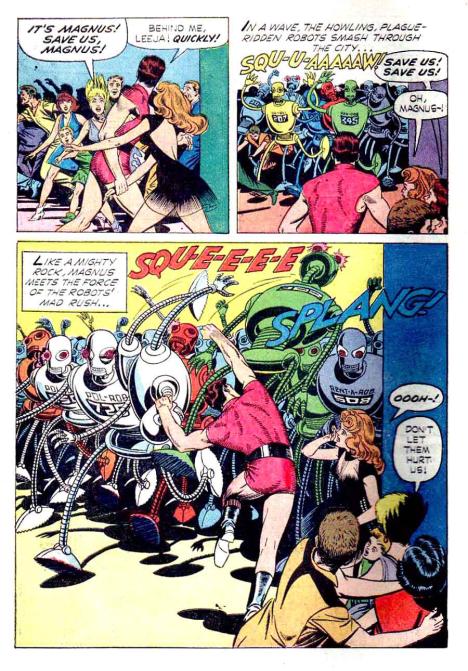 The buildings are mostly cloud-brushing, thousand-story phallic prongs (the Comics Code Seal of Approval notwithstanding) and those that aren’t have a sort of Denny’s on Neptune aesthetic, the ubiquitous robots themselves are imaginatively varied in appearance and function, and as for fashion (always the high point of any imagined future), belted tunics, ultra-wide collars, Joan Crawford-in space padded shoulders, and ankle-length capes are de rigueur for the leisure class, which apparently includes just about everybody.

There are some odd choices here and there — I don’t mind finding out that the stylish flying cars of the fourth millenium are piloted lying down, but lying on your stomach? I suppose it would be okay if you’re just making a quick flight to the futuristic equivalent of Wal-Mart for some robot oil, but it looks like it would be extremely uncomfortable on long trips. Well, perhaps this advanced society, though still working out its labor problems, has solved the ultimate human conundrum — how to eliminate lower back pain.

Aside from the nifty visuals, the most interesting thing about these stories is what they say — and refrain from saying — not about the far future (whatever the year 4000 will be like, I think it’s safe to say that it won’t be anything like Magnus), but about the early 60’s. In the very years when the wheels were starting to come off the American Dream and Americans’ faith in their ability to solve any problem through the pragmatic application of technology was meeting its first check in the jungles of Indochina and on the streets of Watts and Detroit, Magnus gave us a world where technology really has solved all problems — except the problem of technology itself.

The absence of any human versus human social friction in Magnus’s world now seems wildly unrealistic (some black and Asian characters appear in issue #14, and their only concern is… wait for it… out-of-control robots), but the idea that the triumph of the machine would be a victory, not for the humans the machines ostensibly serve, but for the the machines themselves, against their creators, is an old one that isn’t going away any time soon. (Admit it – you’ve wanted to punch a computer and hear it go Squeee! for years now. Yes you have — you’re not fooling anyone.) Not to load too much baggage onto this donkey, but Magnus, modest as it is, obeys the same ironclad law that all tales of the future do — its picture of far tomorrows is in reality a record of the hopes and fears current at the time of its conception.

Be that as it may, Magnus Robot Fighter  is of more than sociological interest for anyone who loves classic comic art and pulp daydreams of things to come. A third Dark Horse Magnus volume came out just a few months ago, one that completes Russ Manning’s work on the title, which he left halfway through its forty-four issue run (as fate would have it, to work on Tarzan). 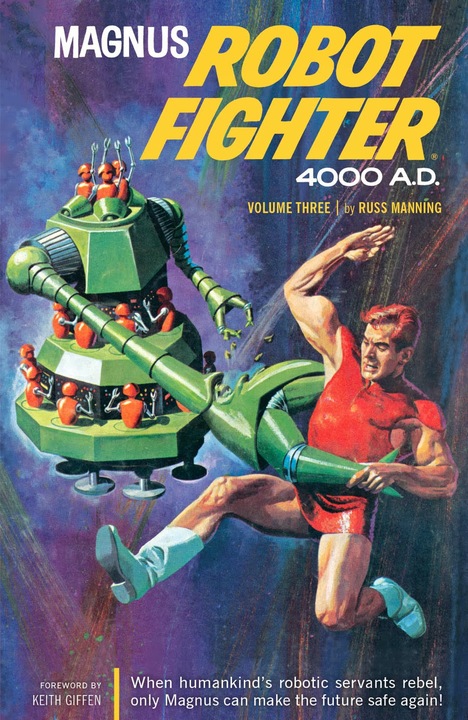 I definitely plan to buy a copy. Magnus, Robot Fighter is the sort of comic Elroy Jetson would have read, and that’s a good enough recommendation for me.

I have some vague memories of reading these, so apparently it was popular enough to have been translated into Finnish in the seventies. Although the name of the comic did not sound right. And indeed, in the Finnish version the main character’s name was Markos. Maybe the original did not sound futuristic enough, as it is a Swedish (and Finnish) proper name.