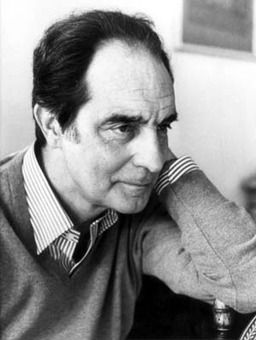 Italo Calvino, who died in 1985, was one of Italy’s foremost writers. A “literary” rather than a genre writer (though that distinction has come to mean less and less in the thirty years since his death), he nevertheless flirted with the fantastic for much of his career. A prime example of Calvino’s humorous and highly idosyncratic bent for fantasy is Our Ancestors, a volume containing three of his works from the 1950’s — two novellas, The Cloven Viscount and The Non-Existent Knight, and a novel, The Baron In the Trees.

The two novellas are light confections that amusingly juggle history, satire, and philosophical concepts. In The Cloven Viscount, a seventeenth century Sardinian nobleman, the Viscount Medaro, goes off to battle the Turks; in his first encounter with them, he is split down the middle by a cannon ball.

Both halves are stitched up and resume life as usual. Things are somewhat complicated by the fact that one half is now irredeemably evil, while the other half is insufferably good. (The “unmixed” goodness of the virtuous half alienates just as many people as the nastiness of the bad half does, in fact.)

The two halves become rivals for the same woman, a young lady named Pamela, and wind up fighting a duel over her, in which they are both wounded. A doctor stitches them back together and the restored and again properly “mixed” Medaro marries Pamela. They live happily ever after, highlighting the fairy tale qualities of the story. (Calvino had a great regard for the Brothers Grimm and in 1956 edited his own collection of Italian folktales.)

The Non-Existent Knight tells the story of one Agilulf, a knight of Charlemagne. Agilulf is a proper soldier in every way but one — he doesn’t exist. The only thing in his impeccably maintained armor is a voice. 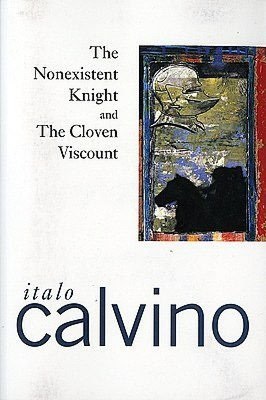 On inspection parade, the emperor (who is unaquainted with this unusual knight) instructs Agilulf to raise his visor:

“The knight made no gesture; his right hand, gloved in close-webbed chain mail, gripped the crupper fimer than ever, while a quiver seemed to shake the other arm holding the shield.
‘I’m talking to you, paladin!’ insisted Charlemagne. ‘How come you don’t show your face to your king?’
A voice came clearly through the gorge-piece. ‘Sire, because I do not exist!”
‘This is too much!’ exclaimed the emperor. ‘We’ve even a knight who doesn’t exist! Let’s just have a look now.’
Agilulf seemed to hesitate a moment, then raised his visor with a slow but firm hand. The helmet was empty. No one was inside the white armor with its iridescent crest.
‘Well, well! Who’d have thought it! exclaimed Charlemagne. ‘How d’you do your job, then, if you don’t exist?’
‘By will power,’ said Agilulf, ‘and faith in our holy cause!’
‘Oh, yes, yes, well said, that is how one does one’s duty. Well, for someone who doesn’t exist you seem in fine form!'”

Throughout the story, Calvino plays tricks with the theme of a constructed (or even wholly fabricated) identity, while also poking fun at the the conventions and ideals of chivalry. Both of the novellas are whimsical without being cloying, mainly because the whimsicality is offset – but not spoiled – by an irony that is sharp, but never becomes bitter.

Like the two shorter pieces, the novel in Our Ancestors has a historical setting. Taking place during the high tide of the 18th century Enlightenment, The Baron In the Trees tells the extraordinary story of a young Italian nobleman, Cosimo Piovasco di Rondo.

One evening when he’s twelve years old, Cosimo rebels against parental authority (he refuses to eat a dish of snails cooked up by his sour, spinsterish sister, who enjoys subjecting the family to her culinary tortures) and runs out of the house. To evade recapture, he climbs a tree in the garden.

Cosimo’s brother (who narrates the book) tells what happens next:

Our father leaned out the window. ‘When you’re tired of being up there, you’ll change your mind!’ he shouted.
‘I’ll never change my mind!’ exclaimed my brother from the branch.
‘You’ll see as soon as you come down!’
‘I’ll never come down again!’ And he kept his word. 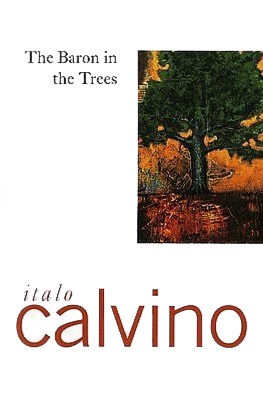 Indeed he does; Cosimo spends the rest of his life in the trees of his native district of Ombrossa, and so thick are the trees in that region that he can travel for many miles, moving from tree to tree, crossing where their branches touch.

After a period of adjustment, his family and the local people eventually come to accept this strange situation and Cosimo’s fame spreads throughout Europe. Some think him mad and some consider him a sage. Either way, he manages to lead a lively and eventful life, having love affairs, fighting fires, battling bandits and pirates, engaging in duels, printing a newspaper, helping Ombrossa’s residents with civic and agricultural problems, and eventually becoming Baron — a title he cares nothing for — upon his father’s death.

Eccentric he may be, but Cosimo is far from being a hermit. He keeps abreast of his age’s social and political thought; he corresponds with Diderot, Rousseau, Bayle, and other leading philosophes and scientists, is admired by Voltaire, and banters with Napoleon as the Emperor passes through Italy. Cosimo even writes a political treatise — “A Proposal For an Ideal Republic In the Trees.”

Through all of his trials, Cosimo always remains true to himself, and his critique of the rest of ground-bound humanity is always a gentle one. When he comes to die, old and infirm after a life spent in the branches, Cosimo even finds an amazing way to thwart the expectations of those who thought that death would be able to bring him back to earth.

Cosimo’s exit leaves his brother bereft. He senses that the world now has no place left for Cosimo’s kind of rebellion; even his beloved trees are disappearing. The Baron In the Trees is a funny, wise, graceful, pleasantly melancholy book that’s absolutely individual, like its hero.

Calvino was one of our era’s great and (outside his own country) undervalued writers. Our Ancestors is currently out of print, but The Non-Existent Knight and The Cloven Viscount are available together in a single volume, as is The Baron In the Trees.

If you’re unacquainted with the special brand of humor and charm that Calvino brought to the fantastic, it’s well worth the effort to rectify that situation — just don’t look for him on the fantasy shelf.