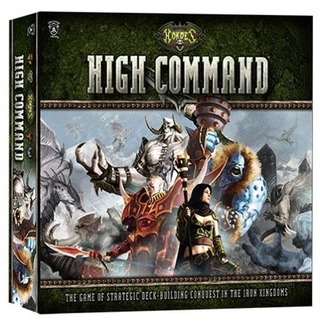 So I’m sitting in the front row at the Games Plus Spring Auction on Sunday, minding my own business, when the auctioneer holds up a brand new, still-in-the-shrinkwrap, copy of Hordes: High Command and starts the bidding at a dollar.

Now, I have no idea what Hordes: High Command is all about, but the box looks pretty neat, with giant monsters and what-not. Plus, a buck. I’m sitting close enough to read the tag line at the bottom: The Game of Strategic Deck-Building Conquest in the Iron Kingdoms, and I know that promises a lot of, uh, deck-building fun… okay, to be brutally honest, I’m not 100% sure what a “deck building” game is. But you learn the art of the quick decision at auction and my card was in the air pretty much the moment I saw the beautiful babe and the monster on the cover.

Well, I won it. Whatever it is, exactly. It’s apparently a stand-alone game that can be played with just the contents of the box or combined with other Hordes High Command products for a customizable experience. Okay, I copied that sentence from the back of the box. But I think it sounds pretty good. I looked up Hordes on Wikipedia, and it’s a “30mm tabletop miniature wargame produced by Privateer Press… [and] designed as a companion to Warmachine.” Cards and collectible miniatures… we’re moving into a terrifying area for me. Thank God the woman on the cover doesn’t look threatening too or I might wrap this in brown paper and hide it in the basement.

Still, I’ve been mightily impressed by Privateer Press over the last decade, especially their Iron Kingdoms stuff, and Wikipedia assures me the game shares the same setting as the Iron Kingdoms — and also that Hordes won the 2006 Origins Award for Miniatures Game of the Year, which is reassuring. There are plenty of intriguing things about the game (like, how come a miniatures game doesn’t come with any miniatures? What’s up with that?)

I think I might delve deeper into the mystery this week. Hordes: High Command was published by Privateer Press on October 09, 2013. The game includes a set of rules and 386 cards and is priced at $44.99. I won my copy at auction for $12, due to mad auction skillz. Learn more at the website.

Black Gate » Blog Archive » Rally Your Armies, Dominate Your Foes, and Give a Boatload of Commands in Warmachine: High Command

[…] right, so five minutes ago I won a copy of Hordes: High Command at the Games Plus Spring Auction, and I’m feeling pretty good. Sure, would wouldn’t? […]