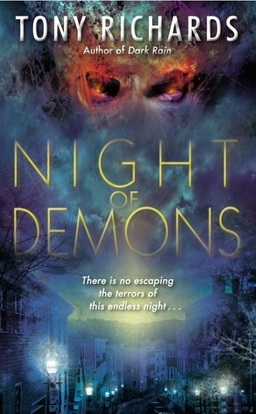 I don’t tend to report much on horror in my New Treasures column. Not that I haven’t anything against horror, but I have enough trouble just keeping up with all the intriguing new fantasy crossing my desk.

But there’s a lot of interesting stuff going on in modern horror, and you deserve to know about it. So I try to sneak one in from time to time. Like Tony Richards’s intriguing Night of Demons, his latest novel set in a Massachusetts town that can’t be located on any map… and which people forget as soon as they leave.

Centuries ago, the Salem witches founded the village of Raine’s Landing, then cloaked it in magic to hide it from sight. Many of their descendants still practice the supernatural arts — and no one who lives here can ever leave. Now evil has breached its boundaries once again…

A serial killer with a corrupt and twisted soul, Cornelius Hanlon has freely entered Raine’s Landing, undeterred by the ancient magical safeguards. And when he chooses the town’s oldest adept as his first victim, the maniac inadvertently gains possession of a powerful “gift” more terrible than anything he could have sadistically dreamed.

Ex-town cop Ross Devries and his Harley-riding sometime-partner, Cassandra Mallory, have no supernatural abilities. But they are the last line of defense in this village of secrets and shadows — facing a psychopath who now wields the power to bend the living and the dead to his will.

Night of Demons is the sequel to Dark Rain, published in 2008. A third Raine’s Landing novel, Speak of the Devil, was just released this month. Richards is also the author of Our Lady of The Shadows (2011) and the collection Shadows And Other Tales (2010).

Night of Demons was published by Avon EOS in October, 2009. It is 390 pages, priced at $7.99 for both the print and digital editions. I bought my paperback on Amazon, on sale for just $3.20 — copies are still available at the discount price.