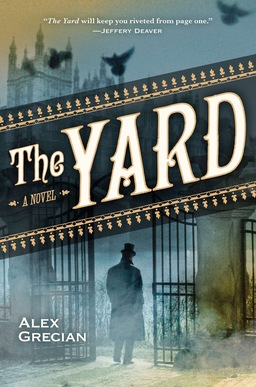 I’m always disciplined when I visit a bookstore. I go in, get what I came for, and leave. I look neither left nor right. Get in, get out, that’s my motto.

You’re right. I’m totally lying. I’m lucky if I even remember why I came to the bookstore by the time I get to the cash register. My arms are usually full, I have a dazed expression, and I’m no longer sure exactly where I am. Thank God the folks behind the counter recognize me by now. It saves a lot of time and embarrassment.

I usually stick to the SF and fantasy sections, but every once in a while something irresistible will cross my path. Something like The Yard, the start of a new gas-lamp mystery series by Alex Glexian, author of the popular Image comic Proof. A first glance The Yard doesn’t seem to include any of the gonzo steampunk action or bizarre characters of Proof — or indeed, anything overtly supernatural — but I find it very appealing nonetheless.

1889, London. Jack the Ripper’s reign of terror is finally over, but a new one is just beginning.

Victorian London — a violent cesspool of squalid depravity. Only twelve detectives — The Murder Squad — are expected to solve the thousands of crimes committed here each month. Formed after the Metropolitan Police’s spectacular failure in capturing Jack the Ripper, the Murder Squad suffers the brunt of public contempt. But no one can anticipate the brutal murder of one of their own…

A Scotland Yard Inspector has been found stuffed in a black steamer trunk at Euston Square Station, his eyes and mouth sewn shut. When Walter Day, the squad’s new hire, is assigned to the case, he finds a strange ally in Dr. Bernard Kingsley, the Yard’s first forensic pathologist. Their grim conclusion: this was not just a random, bizarre murder but in all probability, the first of twelve. Because the squad itself it being targeted and the devious killer shows no signs of stopping before completing his grim duty. But Inspector Day has one more surprise, something even more shocking than the crimes: the killer’s motive.

This is the author’s first novel. Grecian has already penned one sequel in what’s now being called the Scotland Yard’s Murder Squad series: The Black Country, released in hardcover in May of this year. The Yard was published in April 2013 by Berkley. It is 422 pages, priced at $16 in trade paperback and $9.99 for the digital edition.

[…] Sleuths, edited by Mark Valentine The Madness of True Detective Sgt. Janus Returns by Jim Beard The Yard by Alex Grecian The Casebook of Carnacki The Ghost Finder by William Hope Hodgson The Shapes of […]