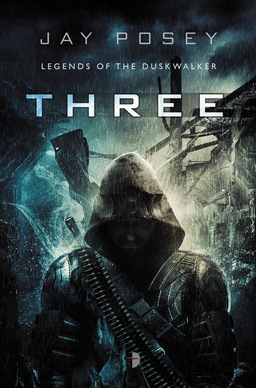 In case anybody has surfed over accidentally from io9 or something, I want to make clear that we’re a fantasy website. Fantasy is J.R.R. Tolkien, Conan, Harry Potter, movies with wizards, pretty much any game with oddly-shaped dice, most anime, and those secret daydreams you have about Scarlett Johansson. That’s fantasy.

We don’t cover much mystery, current events, or science fiction. Except maybe for Star Trek, ’cause it’s Howard’s favorite show, and we’re big William Shatner fans (but who isn’t?)

I mention this because I bought a copy of Three today and thought I would turn it into my Saturday New Treasures column. But no sooner do I settle into my big green chair and crack it open, then I discover it’s actually science fiction. Should have paid more attention in Barnes & Noble. That’s what dreaming about Scarlett Johansson will do to you.

Well, what the heck. Still looks more like fantasy than SF to me. Three is the first book in a new trilogy (see? What’s more fantasy than that!) called Legends of the Duskwalker. Here’s the book description.

The world has collapsed, and there are no heroes any more. His name is Three, a travelling gun for hire in a dying world. He has no allegiances, no family, no ties.

Against his better judgment, he accepts the mantle of protector to a sick woman on the run, and her young son. Together they set out across the plains in search of a mythic oasis, attempting to survive the forces that pursue them, and the creatures of the dark. In these dark times, a hero may yet arise.

Angry Robot, in their efforts to be helpful, have the words “Not a sequel” buried in the copyright page. That was helpful, actually. They’ve also printed handy category labels on the back — apparently Three should be filed under Science Fiction, Apocalyptic Wasteland, A Journey Home, Three For All, and Fear the Weir. Fear the Weir? Let’s just say that book categorization sure has changed since I learned the Dewey Decimal system, and leave it at that.

Three was published by Angry Robot on July 30.It is 480 pages, priced at $7.99 for the paperback and $6.99 for the digital edition. The moody bloke-in-a-cloak cover is by Steven Meyer-Rassow.

Well, any hooded figure on a book cover generally suggests a fantasy novel to me! Usually one involving a roving assassin or – possibly – a Dark Lord, so I think your mistake was understandable.

‘Fear the weir’ may be largely useless as an indication of a book’s content, but is good advice nonetheless. Dublin has a large number of weirs over its two canals, most of them with less than adequate handrails. A bridge is always a wiser and safer option.