I love anime, but I’d fallen out of the habit of watching it. The last series I finished was Claymore, nearly a year ago, and that disappointed me with paper-thin worldbuilding, slow animation, and one-note characters. Anime was beginning to look like a habit I’d dropped.

And then, based on a massive Internet buzz, I watched the first episode of Shingeki no Kyoujin, aka Attack on Titan. Within that short period — a mere twenty-two minutes, minus commercial interruptions — it became clear that I had stumbled across something great. I was moved, horrified, tantalized with the promise of soaring action to come, and, most importantly of all, captured by the mystery and terror of a bizarre world.

Take a moment to ravish your eyes on the glory of this opening song, which added a layer of fresh hair to my already-manly chest:

Shingeki is ostensibly set in a far-future version of Earth, but it plays in the spirit of sword-and-sorcery rather than sci-fi (as so much anime does). It presents a world where humanity has been driven nearly extinct by the Titans: towering monsters with the surface appearance of humans. However, their crotches are smooth and sexless, and they wander aimlessly with idiot grins on their faces. Their only apparent purpose is to hunt and eat humans.

For a hundred years, the remnants of humanity have hidden within the safety of three concentric walls: Cina, Rosa, and the outermost Maria. These walls encompass a diameter of a couple hundred kilometers. Everything outside is the uncontested hunting ground of the Titans.

Humanity possesses only two defenses against the titans. One is, of course, cannon-fire. The second is the 3D Maneuver Gear, which combines Batman’s gas-powered grapnel with Legend of Zelda’s iconic hookshot. Warriors wear a harness around their hips and grip a grapnel launcher in each hand, which they use to fire spiked steel wires into stone, wood, or the bodies of the Titans themselves. These wires allow them to make bounding leaps and swings from point to point, with the ultimate goal of maneuvering around a Titan to get a clear strike at a weak point at the base of its spine.

Needless to say, this gives birth to some awesome combat sequences. But the incredible first episode offers only a glimpse of 3D Gear combat, and Shingeki doesn’t rely on its combat scenes for its remarkable power.

The first episode introduces Eren Jaeger at the age of eleven, living at the farthest extent o 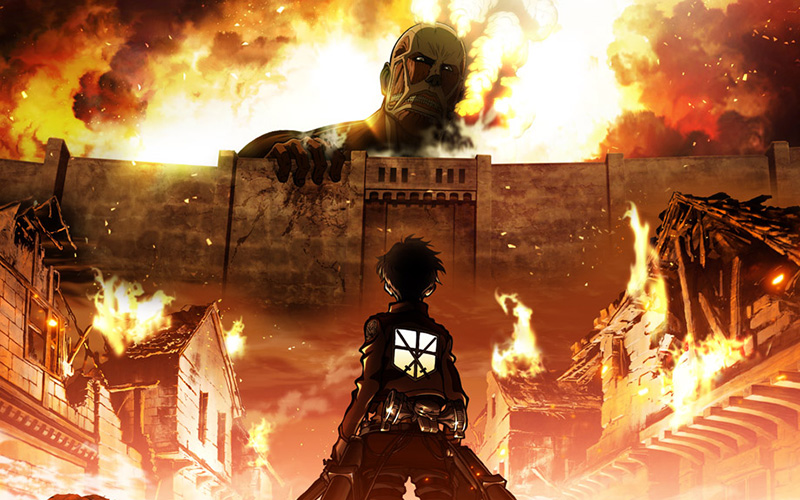 f humanity’s domain. Titans hunt the wilderness just beyond the walls that overshadow his home. Eren is consumed with wanderlust, determined to join the Survey Corps and venture beyond the walls to fight back against the Titans. Even when he sees a Survey Corps expedition return decimated, reduced to haunted, bloody shambles, his mind is unchanged.

He argues with his mother about his plans and runs away to sulk with his foster sister, Mikasa. On that very day, a colossal monster never before seen appears at the wall; an eighty-meter Titan sticks its monstrous head over the wall and kicks open a breach at the wall’s base. Titans flood through, and the feast begins. By the time Eren and Mikasa run back to their home, their mother is trapped beneath tons of debris, her legs crushed. . .and a Titan is shambling towards her, its slab-like teeth already dark with blood.

One of the wall guard arrives, wearing his 3D Gear, but the mere sight of a Titan terrifies him out of all thought of actually confronting it. He takes Eren and Mikasa in his arms and runs. Eren watches over his shoulder in horror as a Titan bends down, takes his mother in an enormous hand, and eats her in a single gulp.

A somber voice-over concludes the episode:

On that day, mankind received a grim reminder. We lived in fear of the Titans and were disgraced to live in these cages we called walls.

I was horrified and enraptured.

Of course, thanks to limits on my time, I’ve only watched up through episode 9 at the time of writing, but I haven’t been disappointed by the series that builds on that awesome opening. Eren grows into a young man consumed with the kind of righteous anger legends are written about, determined to make himself into an ultimate weapon to rid the world of Titans. Mikasa and his childhood friend Armin enter the Guard Corps with him, and together they learn the art of the 3D maneuver gear and join the front lines of humanity’s fight for survival.

More on that 3D Maneuver Gear. It really is one of the coolest pieces of fantasy tech I’ve ever seen, with a surprisingly well-considered design. It has its limitations, as the dangers of running out of gas mid-battle become a major plot point, and it shows the evidence of in-world innovation, as the hand-held grapnel launchers double as the hilts of swords with modular blades. Its apparatus even gives the show’s heroes an instantly recognizable look, sure to become a common sight at conventions.

The show also knows how to deploy raw horror to its advantage. Giants have become comical figures more often than not, but Shingeki reclaims the visceral fear even the smallest children have of being eaten by monsters. That the monsters look human, chewing with molars rather than ripping with fangs, worsens the picture with cannibalistic undertones. Shingeki isn’t afraid to show us sprays of blood and severed arms snipped off by closing teeth when the drama requires it. The scene of Eren’s mother being eaten is often revisited as the show advances — looming as large as it does in his mind — and it never loses its impact.

Shingeki has an honest portrayal of fear such as I’ve rarely seen in anime, and almost never in an action show. Time and again human warriors falter when faced with the awesome power and unrelenting terror of the Titans, to the point where overcoming crippling fear becomes one of the show’s major themes. Nor does the show ever make it easy for our heroes. Even the 3D Maneuver Gear only gives humans a slim chance of confronting a Titan and winning. Soldiers die in large numbers, torn apart limb from limb or stuffed between jaws spread wide. 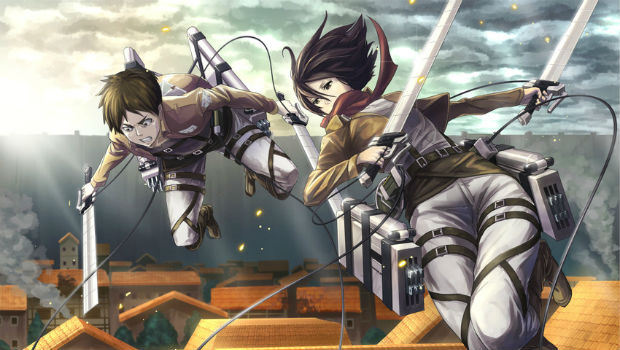 It’s a bracing change from scores of shows in which heroes bleed gallons, but recover with an afternoon of bed rest and approach battles with colossal monsters with no more hesitation than I have when tackling a fourth bowl of Froot Loops. Shingeki is more honest about the cost of suffering, fear, and violence than most adventure stories in any genre.

It’s not all darkness and horror. There are moments of humor and plenty of warmth between friends and family (although, thankfully, the show eschews entirely the comical chibi-style), including moments during the training sequences that made me laugh out loud. But generally, with a dark, apocalyptic story to tell, Shingeki is bloody and grim.

Technically, the animation is adequate, although there are notable signs of budget conservation, including a heavy reliance on flashbacks to events we saw just one or two episodes ago. When the heat turns up and the action starts, though, the soaring Titan vs. human fights are intense and satisfying, and the characters are interesting and convincing even as they portray emotions at the extremes of human capacity.

Shingeki no Kyoujin is a towering achievement, a clever anime with a truly epic story to tell and the style to tell it effectively. I recommend it without reservation.

You can watch the show for the low, low cost of zero dollars on the Funimation website.

Sean may be mighty of stature and heroic of voice, but he is not, technically, a giant.

This is absolutely a great show and worth a watch. I think anime and manga are most generally associated with sci-fi and super powered highschool drama. While that might well be the bulk of the output, there is really some fantastic work in other genres as well-Attack on Titan being a prime example.