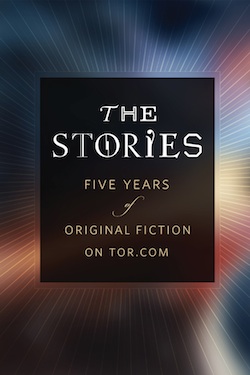 To celebrate their fifth anniversary, Tor.com is releasing an anthology crammed with all the original fiction they’ve published since their launch.

In short, this is one of the most impressive and monumental anthologies to come along in years. And Tor.com is giving it away absolutely free. We’re not worthy, but we won’t let that stop us.

You can see the complete list of fiction Tor.com has published in the last five year at their Original Fiction index. And just to prove that they’re not resting on their laurels, they’ve announced five new stories will be published tomorrow, by Carrie Vaughn, Nancy Kress, Lavie Tidhar, Ben Burgis, and Tina Connolly.

Get the free book here.