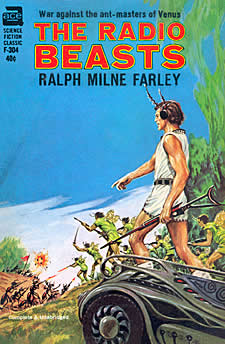 Last month I wrote a brief piece on Ralph Milne Farley’s pulp novel An Earth Man on Venus, originally published as The Radio Man in Argosy magazine in 1924.

As part of the research I dug a little into Farley, and discovered his real identity was Roger Sherman Hoar, state senator and assistant Attorney General for the state of Massachusetts.

That’s a lot of radio action.

A lot of things have changed since the 1920s. But one aspect of pop culture remains consistent: when a property has seven sequels, someone somewhere made a lot of money.

We can safely assume that by the time The Radio Minds of Mars (great title) appeared in 1955, America had had its fill of radio adventure. But in the intervening years, the Radio novels were a hot property.

The Radio Beasts affirms that. It had multiple editions, beginning with its 1925 four-part serialization in Argosy All-Story Weekly. It was reprinted (in one installment) in Fantastic Novels Magazine in January 1941 — with a Frank R. Paul cover, no less. 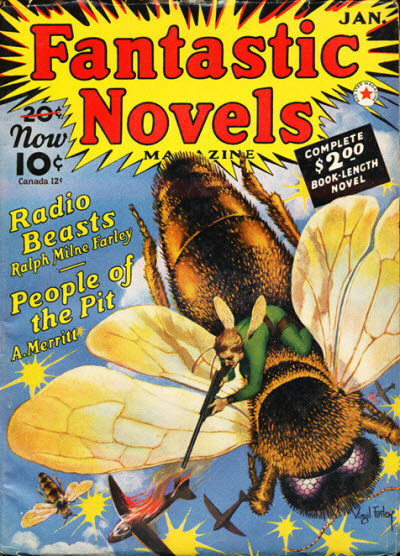 Its first book publication was the 1964 Ace paperback above, with a dynamic Emsh cover.

I think the Ace paperback may have been the first version I ever saw.

Certainly I remember fragments of the back cover copy, anyway:

When Myles Cabot invented radio matter-transmission, he used it to visit our neighboring world of Venus. There he found himself on a world of giant insects and winged men who conversed by means of natural radio. And there, on the Radio Planet, he found a bride, a kingdom, and a home.

But the menace of the giant Formians, intelligent antlike beings who had once been the masters of this world, was a constant threat to his new realm. The Radio Beasts is an adventure-filled and colorful science-fiction classic of the war between these monsters, the embattled humans, and the huge bee-like beings who held the balance of power.

Something else that’s changed since 1925 is that residents of that distant era apparently didn’t find it odd that Myles Cabot found a bride among the winged, antennaed, radio-transmitting aliens of Venus.  I hope it was a long engagment. If that were me, I’d have a lot of questions about exactly those buzzing antennas were for, and if our children would be able to wear hats.

The Ace edition was F-304 in their paperback series, which put it in some illustrious company. 1964 was a pretty good time to be collecting Ace paperbacks.

To give you an idea, The Radio Beasts was immediately preceded by F-301, Philip K. Dick’s The Simulacra, and F-303, Marion Zimmer Bradley’s The Bloody Sun. It was followed by F-305, Robert E. Howard’s Almuric. 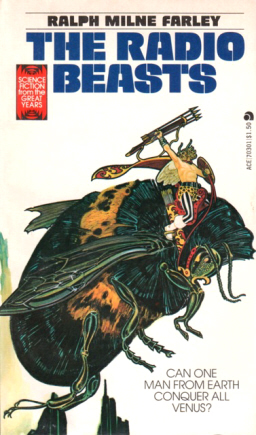 A dozen years after the 1964 edition, Fred Pohl chose The Radio Beasts for his excellent Science Fiction from the Great Years reprint line.

The first book — of course — was Philip Francis Nowlan’s Armageddon 2419 A.D (1972), which was the opening volume of the Buck Rogers saga; he also selected The Mightiest Machine, The Moon Is Hell, and The Ultimate Weapon by John W. Campbell, Metropolis by Thea von Harbou, plus novels by Fletcher Pratt, E E. ‘Doc’ Smith, Ray Cummings, Eric Frank Russell, Murray Leinster, and many others.

That’s the Pohl edition at left. History does not seem to record who did the cover for this one. A shame, because I rather like it.

Pohl switched up the back cover copy a bit:

Shot accidentally into space by his new invention, Myles Cabot found himself on Venus, alone and unprotected. Arrayed against him were a race of intelligent antlike beings and their human slaves. But in two short years, he managed to completely change the course of history on that planet by leading the humans to victory over their former masters.

His success, however, was short-lived. In one sweeping blow Cabot lost all he had gained, and was forced to begin a second, even more miraculous, rise to power….

The Radio Beasts, a new and colorful addition to the popular Great Years Series, is the companion novel to The Radio Planet.

Pohl also reprinted the third volume, The Radio Planet, the same year — with my favorite cover of the entire series. But we’ll talk about that one in the next installment.

That was it for the reprints, however. After 15 volumes, the Science Fiction from the Great Years line died in 1976, and Farley’s Radio novels died with it.

Science fiction experienced a huge explosion after the release of Star Wars in the summer of 1977, and it crowded a lot of the reprint volumes off the shelves. Farley’s pulp classics remained out of print for three decades.

Pulpville Press remedied that when they reprinted both The Radio Man and The Radio Beasts in June 2006.

Both are still available in (relatively) inexpensive trade paperback format for $15.

The Radio Beasts was published by Ace Books in 1964. It is 192 pages in paperback, originally priced at 40 cents.

Check back next time when we look at The Radio Planet, which originally appeared in 1926, and was also reprinted twice by Ace Books.

I had both Ace “Great Years” editions back in 76 and even though I can still remember quit a bit from both books I didn’t really enjoy them all that much. Which, looking back, seems kind of odd considering I was a huge Lin Cater fan back then and these ome off like something he would have written. I was some how dissappointed though.

The cover to Radio Beasts might have been done by Patrick Woodroffe since he did the awsome cover to the “Great Years” edition of Radio Planet.

[…] first two, The Radio Man (aka An Earth Man on Venus, which I discussed here) and The Radio Beasts (here), The Radio Planet was originally published in Argosy All-Story Weekly, in six installments […]