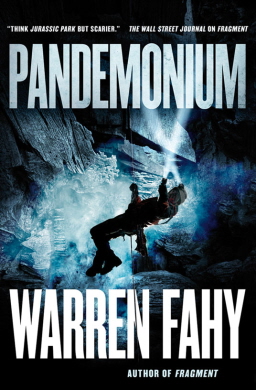 In 2009, Warren Fahy released Fragment on an unsuspecting world.

An unassuming paperback about the cast and crew of a reality show on a long-range research vessel in the South Pacific, who receive a distress call from the mysterious Henders Island, Fragment wasn’t just a great modern adventure tale. It was also an over-the-top monster thriller, a glimpse at how life on Earth might have looked if evolution had taken a very different turn half a billion years ago. Henders Island proved to be a fragment of a lost continent, packed with the kind of creatures that could wipe out our fragile ecosystem.

Since the release of Fragment, fans have been waiting for Fahy’s next monster-laden follow up, and it has finally arrived in the form of Pandemomium, a new hardcover from Tor.

Deep beneath the Ural Mountains, in an underground city carved out by slave labor during the darkest hours of the Cold War, ancient caverns hold exotic and dangerous life-forms that have evolved in isolation for countless millennia. Cut off from the surface world, an entire ecosystem of bizarre subterranean species has survived undetected — until now.

Biologists Nell and Geoffrey Binswanger barely survived their last encounter with terrifying, invasive creatures that threatened to engulf the planet. They think the danger is over until a ruthless Russian tycoon lures them to his underground metropolis, where they find themselves confronted by a vicious menagerie of biological horrors from their past — and by entirely new breeds of voracious predators. Now they’re rising up from the bowels of the Earth to consume the world as we know it.

Yup, that sounds pretty much like what I was waiting for. Pandemomium was published by Tor Books on February 28. It is 306 pages (with 11 extra pages of maps and illustrations of monster innards), priced at $24.99 in hardcover and $11.99 for the digital edition.

I’m glad he’s got a new one out — it’s not great literature, but I did enjoy Fragment. (And I’m shocked we haven’t seen a movie or SyFy miniseries or something yet.)