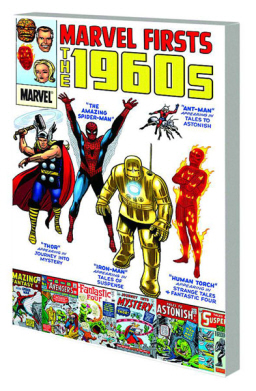 I remember the first time I read Origins of Marvel Comics, Stan Lee’s seminal 1974 anthology collecting the first appearances of the Fantastic Four, the Hulk, Spider-Man, Thor, and Doctor Strange. It was memorable because, for one thing, Stan’s bombastic introductions were frequently more entertaining than the comics themselves, and for another… the comics sure looked old.

Stan knew that, and he also knew a collection of first issues didn’t necessarily reflect Marvel Comics at its best. So alongside each origin story he also reprinted a tale that did showcase what made these characters special, including the FF’s epic battle with the Silver Surfer (from issue #55), Spider-Man’s tussle with the Shocker (issue #72), and others classic stories from the late 60s.

It made for a terrific book — and a great seller. Stan followed it a year later with Son of Origins of Marvel Comics, and then Bring on the Bad Guys; all told Marvel produced a total of 24 different books in similar format with publishing partner Fireside Books.

Origins of Marvel Comics hasn’t been in print in nearly three decades (ignoring the oddity with the same title released last May, which condenses the origin of each of the Marvel’s most popular characters into a single page), which is a shame. However, Marvel finally rectified this oversight late in 2011, kicking off an ambitious program to collect the first appearances of virtually every one of its major and minor characters.

This is a massive undertaking, and while I miss the partner tales Stan included alongside his selections, it’s an understandable sacrifice for the sake of completeness. While another reprinting of The Fantastic Four #1 or Amazing Fantasy #15 wouldn’t normally get me to crack open my wallet, an omnibus volume that also collects The Rawhide Kid #17 (from 1955), Daredevil #1 (1964), Western comic The Ghost Rider #1 (1967) and numerous others was definitely worth a look.

It also collects material from the following comics: 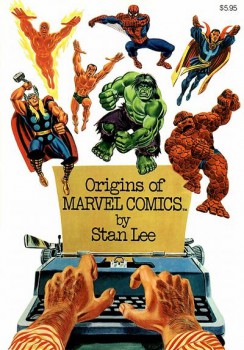 These latter issues in particular are a treasure trove, as they include the first appearances of Iron Man and Ant Man, and the re-appearance of Captain America. They also include the breakout solo adventures of the Human Torch, the Sub-Mariner, Red Wolf, Dr. Doom, the Silver Surfer, the Black Widow and many more.

It goes without saying that Marvel Firsts: The 1960s is a must-have for Marvel completists. But I’m also surprised at how much fun it is for the casual reader. I’ve really been enjoying some of these early issues, especially the westerns.

As the book is organized chronologically, it’s also been a delight to watch the gradual stylistic evolution of the Marvel Universe at the hands of Gene Colan, Steve Ditko, and especially Jack Kirby.

Marvel Firsts: The 1960s was written by Stan Lee, Larry Lieber, Gary Friedrich, Roy Thomas, and Gardner Fox, and includes art by Gene Colan, Steve Ditko, Jack Kirby, and others. It was published by Marvel Comics in October 2011. It is 488 pages in full color, priced at $29.99.

You’ve made me feel incredibly old sir, saying this book came out in 1974, as I happen to have one … the one shown in the bottommost left picture in your post in fact.

I absolutely loved it when I got it as a kid … still do in fact. I keep meaning to go back through it again, but you know how that often goes.

Geez, looks like I’ve stuck my foot in again. I shoud have paid closer attention to the images …

At any rate, you’ve brought me another blast of nostalgia though. Somewhere here in the house I have an album sized full color Marvel calendar of about the same vintage.

Now that I have a “study” I need to pull that puppy out and put it back up again.

This is interesting. I’ve recently started reading the first fantastic four and the Incredible Hulk comics.

> I absolutely loved it when I got it as a kid … still do in fact. I keep meaning to go back through it again, but you know how that often goes.

I know exactly what you mean. While I was preparing this article, I found I really wanted to sit down with ORIGINS OF MARVEL COMICS again, and listen to Stan tell the story of how he came up with the idea of Spider-Man.

I THINK I know where my copy is… but it’s been a few years. 🙂

What do you think? I admit to being underwhelmed by the early issues of FF and Hulk… but the first 30-40 issues of Spider-Man are some of the finest comics ever made. They are brilliant, and still shine today.

It’s probably a good guess that Submariner is the first antihero. He’s like Godzilla in human(oid) form – as likely to destroy New York as he is to save it.

I just finished reading Marvel: The Untold Story and found it an interesting read about Marvel’s history. The place seemed much more chaotic and seat-of-the-pants than you’d ever think from reading Stan’s Soapbox columns.

Good post. I think I’ve still got my old copies of Origins, Sons, Bring on the Bad guys, etc packed up somewhere. Like a lot of people I also found that reading the original first issues was a bit of a let down when compared to the later stories. Still, I bought them all and read and re-read them from cover to cover. At the time I remember thinking that it would be great if Marvel published a series of books that collected every issue of a given title in order. Nowadays with all of the Essential, Masterworks, Showcase, and other books that collect Marvel and DC’s entire comic book past, it’s quite obvious that my childhood wish has been granted many times over. Truth to tell we live in an age of almost embarrassing riches when it comes collected editions of the mediums best and even not so good masterworks.

> I really enjoy the fantastic four villains like Dr. Doom and The Submariner (is he comics first antihero?).

Did you ever read Marvel’s Super-Villain Team Up? There was a great story arc involving Doom and the Sub-Mariner from the late 70s… classic stuff.

> I just finished reading Marvel: The Untold Story and found it an interesting read about Marvel’s history. The place seemed much more
> chaotic and seat-of-the-pants than you’d ever think from reading Stan’s Soapbox columns.

That one’s on my to-be-read pile. I always wondered how the Bullpen managed to be outwardly so creative and chaotic, and yet the business was run like a pretty tight ship. Marvel (almost) never missed an issue, and I can only remember one instance when a monthly issue had to be replaced with a last-minute reprint.

Having tried to put out just one magazine a year for over a decade, I am in awe of that kind of record. 🙂

> Truth to tell we live in an age of almost embarrassing riches when it comes collected editions of the mediums best and even not so good masterworks.

Well said! If you’re a fan of Bronze Age comics (or even older), quality reprints are yours for the asking today.

My only complaint is that you have to be a fan already to be willing to shell out the bucks for these quality reprints. How do I try older comics without paying $60 for a hardcover reprint?

That’s why I was so impressed with The Toon Treasury of Classic Children’s Comics, from last year:

A fabulous collection of hard-to-find comics from a very neglected sub-genre, kid’s comics, and a great way to introduce yourself to some new titles.

I wish there were more examples of comics anthologies that offered similar value.