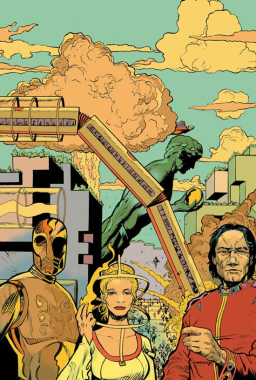 A few months ago, I wrote about Samurai 7, a terrific sword-and-science retelling of Akira Kurosawa’s The Seven Samurai (with killer robots).

It seems this classic tale still has some play in it, if DC Comics’ upcoming Harlan Ellison’s 7 Against Chaos is any indication. Ellison has partnered with artist Paul Chadwick — creator of Concrete, which Blastr calls “One of the most important independent comic series of all time” — to create an epic SF adventure with a familiar theme:

In a distant future, Earth is in grave danger: The fabric of reality itself in unraveling, leading to catastrophic natural disasters, displaced souls appearing from bygone eras, and sudden, shocking cases of spontaneous combustion. The only hope for Earth’s survival is a force of seven warriors, each with his or her special abilities. But can these alien Seven Samurai learn to get along in time to find the source of the gathering chaos and save all of reality?

Ellison, who announced he was dying two years ago (only to change his mind and say he was “feeling somewhat better“), has openly acknowledged his inspiration, saying:

This is 21 years of work finally come to fruition. It is The Magnificent Seven, The Seven Samurai in space, it is the dream fulfilled.

Harlan Ellison’s 7 Against Chaos will be released under DC’s regular brand (i.e. not as a part of the more adult Vertigo or Wildstorm lines) in Summer 2013. Get all the details at DC Comics.

Careful Harlan, ‘7 Samurai in Space’ might be grounds for a copyright lawsuit!

Ha! Harlan’s no stranger to lawsuits, that’s for sure.

In the South we have a saying; “Too Ornery to Die.” If anyone fits that description, it’s Ellison.

I’ll definitely pick up the first issue of this series. Ellison’s knowledge of comics is vast, and I look forward to seeing its practical application.