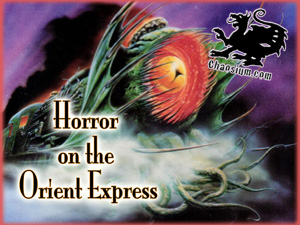 Chaosium is conducting a Kickstarter to update and re-release their legendary 1991 campaign, Horror on the Orient Express, for the Call of Cthulhu RPG.

Set in 1920s Europe (the new edition will include rules for the 1890s too), the campaign arrives in London with a bizarre murder mystery, then runs to Paris and along the route of the Orient Express to a very terminal conclusion in Constantinople. Its storyline, centering on a bloodthirsty artifact, induces trainspotting-like fanaticism among many previous passengers, with original copies selling for hundreds on eBay. There’s even a soundtrack!

Pledge perks include T-shirts, tote bags, bumper stickers, and other freight. Donate $60 or more to receive a hardcopy of the finished product.

If you want to climb aboard but worry you’ve missed your connection, don’t — this high-speed rail already surpassed its goal of $20,000 six times over. Next stop: at $125,000, Chaosium will commission an anthology of Express-inspired fiction, featuring contributors such as Elaine Cunningham, Ken Hite, and James Sutter.

Years ago I embarked on a play-by-post HotOE campaign and made it as far as Lausanne before the Keeper was derailed by personal commitments. My character was an American mob accountant who had skipped to Europe after embezzling from his employers, and the Keeper strongly suggested the vengeful bootleggers would appear somewhere down the line. Of course, he didn’t say when they would attempt to punch my ticket, which added a whole new layer of paranoia to a seriously creepy game. Fun times!

Wow! Horror on the Orient Express is perhaps the most sought-after Call of Cthulhu adventure ever published — and that’s saying something! Used copies run around $200 – $400, if you can find one.

I’d love to see an updated edition. Glad to hear it’s past its goal already.

Thanks for the head’s up!