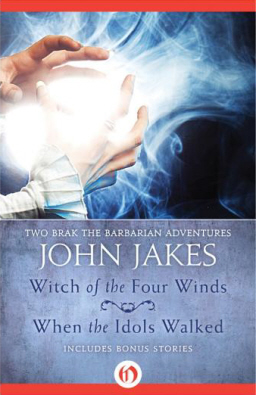 Witch of the Four Winds and Brak the Barbarian will be available in digital format at Barnes & Noble and Amazon.com on July 31 for $4.99 each (before discounting).

Brak the Barbarian first appeared in Fantastic magazine in the short story “The Devils in the Walls” (1963). Over the next few years, Jakes produced over a dozen short stories and novellas featuring Brak, that he gradually collected and expanded into five books, published between 1968 and 1980.

Witch of the Four Winds contains two more early novels: Witch of the Four Winds — originally published under that title in Fantastic magazine in 1963, and then revised and expanded in novel format as Brak the Barbarian Versus the Sorceress (1969) — and When the Idols Walked (Fantastic 1964, expanded and released under the same title in 1978), plus more bonus stories and an illustrated biography.

Jakes’ Brak the Barbarian stories were strongly influenced by Robert E. Howard’s Conan. In the YouTube video Open Road created to promote the launch of the digital editions, Jakes says:

I was directly influenced by Robert Howard, by the fact that there weren’t enough Conan stories to go around… I wanted to create a character much like Conan, put him in similar circumstances, and have a good time writing them.

Brak might not be a standout, but I’m glad they’ve done this. This is one reason I really like e’books – resurrecting out-of-print material and making available at a reasonable price. Granted, sometimes the prices aren’t reasonable but I think these are. ($3.99 each)

My paperback is falling apart so I guess I can justify this.

> This is one reason I really like e’books – resurrecting out-of-print material and making available at a reasonable price.

Well said. These titles have also been created with the active involvement of the author, John Jakes… unlike much of the 99-cent shovelware I find clogging digital shelves. I’m happy to be able to support them.

> My paperback is falling apart so I guess I can justify this.

As someone in possession of a great many disintegrating paperbacks, I know exactly how you feel.

John, this is the first time I’ve encountered the word shovelware. Is it your coinage, or have I just been out of the loop? It’s useful and apt, wherever it comes from.

Actually, it’s a term I picked up from the software industry. Used to refer to the vast collections of software you’d find on a single CD in the discount bin at Best Buy. I wish I could credit for it, but I can’t. 🙂