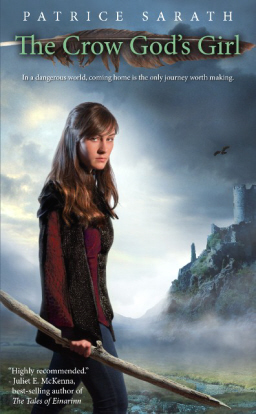 Patrice Sarath has had an enviable career. Her contribution in Black Gate 4, “A Prayer for Captain LaHire,” the tale of three knights and followers of Joan of Arc who discover the horror a fourth disciple has unleashed, was one of the most acclaimed stories from our early years and was reprinted in Year’s Best Fantasy 3 (2003). She edited the anthology Tales From The Secret City in 2007.

She turned to novels in 2008 with Gordath Wood, a book she describes as “hard to categorize:”

It’s fantasy but with only a touch of magic to it. It has romance, but is not a romance (a very different beast). It has a murder-kidnap mystery in it. Basically it has all of the elements of books I like to read. And although everybody has different tastes, I am betting that more than a few of you also like your books the same way I do — shaken and stirred. So if you like fantasy-mystery-romance novels, this one’s for you.

Gordath Wood was well reviewed and spawned a sequel, Red Gold Bridge, in 2009. In 2011 she published The Unexpected Miss Bennet, a Pride & Prejudice sequel which follows middle sister Mary Bennet, the most misunderstood of the Bennet sisters.

Now she’s turned to digital books with a second sequel to Gordath Wood, The Crow God’s Girl. When Lord Terrick’s youngest son is kidnapped, teenage Kate Mosland teams with a mysterious young girl named Ossen to execute a daring rescue… an action with unexpected consequences. As the kingdom stands on the brink of war and Terrick demands Kate submit to a new role, Kate finds that another daring and unexpected action may be the only way to find her true home.

It looks like, at least from the description at Amazon, that Tales From The Secret City is not “her first short story collection,” at least not how I would understand that phrase.

It appears to be a themed collection in which one of her stories appears, one that was previously published in Realms of Fantasy.

Other than that, John O’Neill is once again making me poor! I bought all her titles, except the collection. I can’t tell how good it actually is (no reviews whatsoever), and I already have all the issues of Realms of Fantasy so I can check out the story there. (Also have all the issues of F&SF, back to 1949, Galaxy, Analog, Asimov’s, Black Gate–except for the last one, maybe it’s not John who’s making me poor!)

Right you are! Good catch. Amazon listed her as the sole author, and didn’t list any other authors in the Table of Contents, but I should have looked closer. There are several other authors listed in the copyright page.

I amended the post. Thanks for letting me know.

And wow! That’s quite a magazine collection you have!

It took years of eBaying, and lots of cash. Similar to what you noticed with selling off some of your paperback purchases, the issues with Philip K. Dick stories in them were usually the ones bid up the highest.

I did get lucky in winning a bid for a huge run of Analogs.

Here’s what Patrice just e-mailed me about TALES FROM THE SECRET CITY:

“This was an anthology I edited that my writer’s group, Cryptopolis, put out as a way to publicize our work for that year’s ArmadilloCon, the local Austin convention. David Hebblethwaite reviewed it for SFSite, actually.

Thanks for the additional info. The review at SFSite is overall pretty good: “The book is elevated above the status of back-slapping exercise by actually being pretty good — certainly I don’t feel I wasted my time reading any of these tales.”

And Ms. Sarath’s story was one of the reviewers favorites.

Back to Amazon, and….ordered! (And my wallet–and probably my wife–says, “Damn you, O’Neill!)