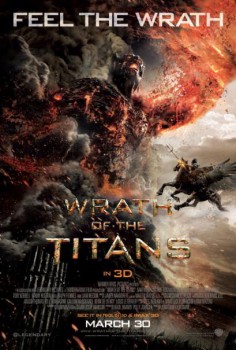 Well, that was trivial.

A sequel nobody demanded from a re-make nobody cared about. There’s no John Carter of Mars “never gonna see a sequel” bitterness here at all. Nope.

But there is some Ray Harryhausen gloating. While watching Wrath of the Titans, I constantly thought of reverse-engineering the movie to create the Ray Harryhausen-Charles H. Schneer original from which it was re-made. I came up with a pretty entertaining film; not as good as Jason and the Argonauts or The Golden Voyage of Sinbad, but right on the level of Mysterious Island, although lacking a Bernard Herrmann score. The scene of Perseus fighting the Minotaur in the labyrinth is one of Harryhausen’s most suspenseful an atmospheric stop-motion creations. In the re-make, the scene is sloppily tossed into the action without any tension, and then fought through without a moment of genuine excitement.

Yes, I’m criticizing this movie by comparing it to a movie that doesn’t exist. But Wrath of the Titans made me do it! It begged me to imagine this better movie from the mid-1980s, one that right now all of us would be geeking-out over on its Blu-ray tie-in release. In fact, I’m going to start an Internet hoax right here: Warner Bros.: Release Ray Harryhausen’s Original Wrath of the Titans (1985) or I Shall Release the Kraken!

Help out, spread the false word. Next year, I want people genuinely confused about the existence of an earlier movie called Wrath of the Titans. It’s almost April Fool’s day, right?

Wrath of the Titans feels exactly like what the Clash of the Titans re-make felt like when I watched it for the second time on DVD: a lifeless spectacle. I gave the re-make a decent review on Black Gate back in the day, but any critic knows that his or her first impressions do not necessarily remain constant. I cannot now, in good conscience, recommend the 2010 Clash of the Titans as even a decent time-waster. It’s a mass of digital nothing that flashed from memory the moment it was over. It is awful.

So Wrath of the Titans is no better or worse than its predecessor — it just reaches the point of minimum returns faster. As in, before the end credits roll. 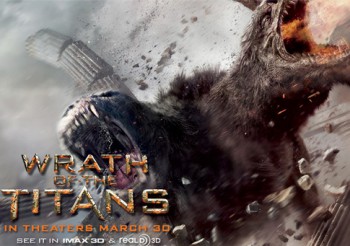 The plot is a simplistic “quest thingy” that lazily rolls back to the theme of revolt against the gods that drove the re-make. Perseus’s female companion from the first movie, Io, gets killed by Liam Neeson’s opening voiceover (hey, the guy has the vocal chords for it), and now he’s living a quietly ticked-off life as a fisherman with his son, Helius. But with the power of the gods diminishing, the walls of Tartarus are growing weaker and allowing the Titans to break free, unleashing excuses for mythic monsters without their native context. Hades (Ralph Fiennes) is still pretending he’s Satan, and he makes a pact with the imprisoned Balrog Kronos to release him from Tartarus. Ares (Edgar Ramirez) betrays the other gods to join Uncle Hades, and they kidnap Zeus (Neeson) to siphon his power to Kronos. Perseus rounds up Andromeda (re-cast as Rosamund Pike, yeah!), Poseidon’s son Agenor (Toby Kebbell), and fallen god Hephaestus (Bill Nighy) to go grab various magical items so he can free his dad and save the world from lots of bad stuff.

You only have to look at the performances of Ralph Fiennes and Liam Neeson to see the trouble with Wrath of the Titans. Neither actor appears to care about anything he’s doing. They still have a bit of magic to them because they’re Ralph Fiennes and Liam Neeson, but otherwise both men are more concerned about craft services than crafting a performance. You can imagine how well the rest of the film fares if these two aren’t trying. By the time of the finale, which again has Perseus flying on Pegasus to defeat an enormous rampaging monster with the magic weapon he obtained on his quest, Wrath of the Titans has all but declared, “Sorry folks, we couldn’t get up the energy to do much more. I mean, filmmaking is hard.” This is a grab for more International cash, and quality utterly optional. All that creative energy went into John Carter of Mars, and this rushed cash-in will make more profit. No, I’m not bitter.

Sam Worthington has a better haircut. I still don’t care about his Perseus. He has even weaker motivation than before, to the point that I wish the film had taken the generic plot route of killing off his kid to give him a bit more anger.

Sigh, Rosamund Pike. She’s a fine actress, and as a choice for a warrior woman she gets my stamp of approval. But there’s nothing here for her to work with. She’s Perseus’s love interest because — well, she’s Rosamund Pike, and of course Perseus needs to end up with somebody. So, uhm, there you go.

The movie does have one adequate sequence. Perseus, Andromeda, and Agenor try to enter Tartarus through a labyrinth with clock-like shifting stone walls. The design has good depth and the camera work and effects combine to make the movie briefly involving. But, since this is a labyrinth, it means a Minotaur must leap out at some point, even if this story has no connection to the Theseus myth.

The Minotaur is emblematic of the trouble with all the monsters in Wrath of the Titans: zero context. The monsters have no set-up, no reason to exist, no mythic qualities. They appear, heroes fight them, they die, heroes move on. Anybody who saw the original Clash of the Titans when they were young can recall the shivery anticipation of watching Medusa emerge in her temple, or the Kraken finally burst up in full shape from the sea. Nothing like that occurs here; the beasts are all devices slapped into the movie because the audience expects a sequel to Clash of the Titans to have monsters. Look, there’s a Chimera! “Why is there a Chimera? What do the three heads do?” Questions not asked, answers not forthcoming. The thing takes up a couple minutes of time and then the movie and characters forget about it. Just padding the film and trying to get something to put in the trailer, people. Please move along to the next set-piece. 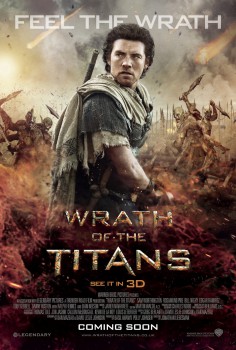 The same sad rules apply to the cyclopses, although they have arguably the best choreographed scene, involving traps set in the forest. I’ve already talked about the pointlessness of the Minotaur. The Makhi, multi-torsoed Titans who fly into battle in the finale, never stand still long enough for a viewer to even get a sense of what they are. And Kronos, although briefly explained (and in a way that will only matter to mythology buffs) is a Kraken stand-in copied from the design of the Balrog in The Lord of the Rings, minus wings. There are, however, a few great shots during the climax where the camera follows Pegasus as the winged horse flies through Kronos’s flung strands of lava. The only action rush I ever felt from the movie was here.

I do appreciate that the screenplay dials back on Hades as the villain. Casting Hades as an “Evil God” was one of the poorer decisions in the Clash of the Titans re-make. Wrath gives the villain part mostly to Ares, which fits better. I don’t condone making any of the Olympians into outright evil gods, since that goes against the tone of the ancient Greek religion (no god is fully “good,” no god is fully “evil”), but the doltish warmonger Ares was not a god that people looked up to. Sticking him in the heavy part allows a nice moment between Hades and Zeus when they team-up, which means a scene with Fiennes and Neeson. Even running on half-rations these guys are a blast.

However, neither man can live up to the performances that Laurence Olivier and Sir Ralph Richardson gave in the 1985 original Wrath of the Titans. And how can Javier Naverrete’s new music overcome the stupendous John Barry score, which won the Oscar that year, beating the composer’s own score for Out of Africa?

Wait, did I just fictitiously defeat John Barry with himself? I’m going insane. Really, John, I didn’t mean it. No offense to your memory.

Final recommendation: Wrath of the Titans is better than the Nispel Conan the Barbarian and Immortals. I would make some analogy here about how getting a nail-gun to your hand is better than getting it to your forehead, but honestly, it’s just a silly movie. A nail gun costs more than a ticket.

I will be in Germany and Italy for the next two weeks, but I promise I’ll back with more Edgar Rice Burroughs and maybe Frederick Faust.

Could it be any worse than the Djinn-turns-suicide bomber-on-medusa scene from the “Clash of the Titans” remake? The “Immortals”/ nail-gun analogy is quite intimidating though…

The only possible explanation is the Clash of the Titans license was cheaper than the God of War license.

And Harryhausen’s Wrath of the Titans, while not as good as his classic Sinbad or John Carter films, was at least better than Sinbad and the Eye of the Tiger.

I wasn’t thrilled about the casting. I didn’t think Sam Worthington was dynamic enough as Perceus, as well as Édgar Ramírez who play Ares. I also noticed that no black actors were cast. The film didn’t offer anything special. I found myself bored and restless, not helped by the poor casting. Sam Worthington had no star quality – nothing that made me think only he could have played the role. I could have gone down the street and chosen someone better to play the part. By rights, the film should have thrilled – perhaps 10 years ago but now we expect more. The casting was tired and the storyline was tired. Oh,and they killed off perceus’s wife so that he could have a new love interest. Some new hot babe on the show. How tired. The film lacked soul.