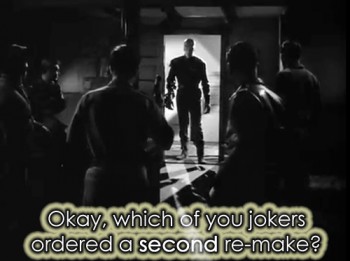 John W. Campbell’s novella “Who Goes There?” has now produced three film adaptations: two classics and a footnote. After recovering from reviewing the footnote, it occurred to me that The Thing 2011 has two positives I failed to mention: it makes viewers appreciate how great John Carpenter’s 1982 version is, and how great Howard Hawks’s 1951 version is.

More than enough ink and bandwidth has covered The Thing ’82, and as much as I adore that movie, I have nothing new to contribute to the discussion of it beyond the comparisons I made in last week’s review. (Edit: Unless I choose to survey John Carpenter’s career.) However, the 1951 film, The Thing from Another World, hasn’t gotten nearly the attention it deserves in the current collective bashing of the new movie. If I’m going to point out how poor The Thing ’11 is, it’s only fair that I smash it with the Howard Hawks film as well. Why should John Carpenter have all the fun?

The Thing from Another World is a great film in its own way. When John Carpenter set out to re-make it, he made the intelligent decision not to duplicate its style and instead return to the source material and create something new. The result was two Things that can stand side-by-side, each adding to the other. 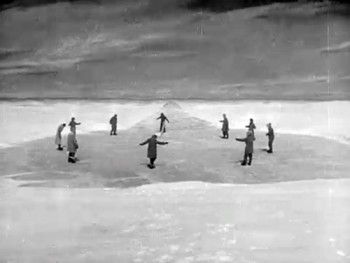 I don’t need to tell you that The Thing from Another World is an important film. The U.S. government has officially declared it to be one when it entered it into the National Film Registry in 2001, placing it in the same group with Citizen Kane, Chinatown, 2001: A Space Odyssey, and Airplane! Expect the 1982 film to eventually end up in the registry as well. (Wow, isn’t it great that Airplane! is now in the National Film Registry? It was entered in 2010.)

As beloved as Carpenter’s film has become, Hawks’s The Thing from Another World has had more influence on genre movies. It arrived in the pivotal early 1950s and turned into one of the foundation stones of the “Atomic Horror” genre that would dominate science-fiction and horror for the rest of the decade. The release the same year of the classic The Day the Earth Stood Still marked the opening of a new frontier in SF filmmaking. The Thing ’51 is not only one of the earliest movies to establish the groundwork of Atomic Horror, it is also one of the best, featuring crackling dialogue, archetypal performances, sly humor, weighty themes of science vs. survival, and razor-sharp suspense direction. It can still make audiences today jump at its scares and make them tighten their stomachs in knots as the climax approaches.

Re-watching the film for this review, I was impressed at how tense the movie still is. Young children should probably avoid it; Roger Ebert has a vivid memory of watching it as a youngster: “I saw the 1951 film with my mother in a movie theater in West Point, NY, where we were attending my cousin Tommy’s graduation from the military academy. It was the most terrifying experience I have ever had in a movie theater.” 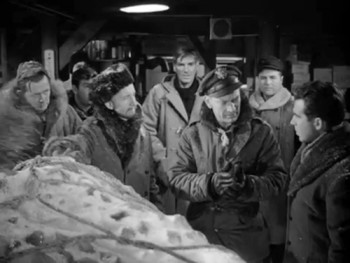 The Thing from Another World is packed with the elements that would become standards for ‘50s SF. The square-jawed, heroic military officers. The feisty attractive female secretary. The go-getting reporter. The misguided scientist who wants to save the monster from the military wiping it out. Touches of Red Scare paranoia. And it concludes with the single most defining line of dialogue for the decade: Keep watching the skies!

Yes, The Thing from Another World is still flat-out awesome. It’s a time capsule about genre, and a great example of that genre. Plus, it is such damn fun.

The screenplay makes many changes to Campbell’s novella, most of which John Carpenter would restore in his version. The most notable alteration is to the Thing. The special-effects technology of 1951 had no way of economically or believably replicating the assimilation and imitation abilities of Campbell’s monster. Hawks’s film instead uses an alien made of vegetable matter in a humanoid form that needs blood to survive. It can’t imitate other creatures, but it is almost invulnerable to injury and can rapidly reproduce itself. It poses the same potential global threat if it gets loose as in Campbell’s novella and the 1982 film, but in a different way.

And it works … at least within the movie established around it. The Thing is still scary, even though it is a hulking humanoid monster instead of a furtive shape-shifter. When the Thing attacks in the film, it does it with a fury that pops off the screen. The carnage it commits takes place off camera (a few scientists gutted and hung up like cattle), but we hear enough about it to make it terrifying.

Another change to Campbell’s novella is the shift in location. All other versions of the story occur in Antarctica, the most remote spot in the planet. The Thing from Another World moves to the Arctic in order to better explain the military presence and tap into fear of the Soviet Union. This change to the Arctic doesn’t do much damage to the story — it is still a dangerous and isolated place — but Antarctica is so much more Romantic and distant. 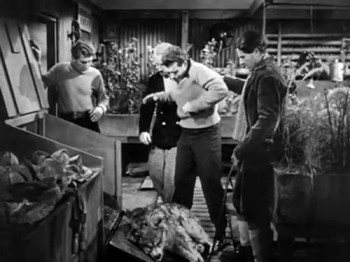 Christian Nyby is credited as director, but much the same way that Poltergeist feels like the product of its producer, Steven Spielberg, more than its director, Tobe Hooper, The Thing from Another World feels exactly like a Howard Hawks movie. It is customary for people to forget Nyby’s name is on the picture and refer to it as Howard Hawks’s The Thing. Nyby has admitted that Hawks was the principle creative talent behind the movie, but actor James Arness — the Thing itself — reports that Nyby was on the set the entire time and that Hawks didn’t simply take over from him. But star Kenneth Tobey claimed it was Hawks who did most of the direction. So yeah, we’ve got a Poltergeist situation here: Who really did direct The Thing from Another World? At the end of the day, does it matter that much? Whatever the amount of Nyby’s contribution, the film belongs to Howard Hawks. Quite literally: he made the film under his own production company, Winchester Pictures Corporation, with RKO handling distribution. Winchester Pictures made only one other film, the 1952 Western The Big Sky, which Hawks directed.

Charles Lederer has the on-screen credit as scriptwriter, but both Ben Hecht and Howard Hawks worked on it as well — and it shows in the crisp, sharp dialogue and crackling sense of humor. Hawks was exceptional at showing professional men in action bristling with competence, and The Thing from Another World is brimming over with this attitude. Each scene is packed with information presented in tight dialogue with dashes of humor. The love story subplot between the hero “Pat” Hendry (Kenneth Tobey) and Nikki (top-billed Margaret Sheridan), assistant to the film’s deluded scientist, would kill the pacing in other films, but the Hawks touch makes it an indispensable part of a whole.

The performances are mannered, as they should be for this type of film. No one performs a “realistic” character, because Howard Hawks doesn’t need those type of characters. He needs crackerjack professionals and fast-talkers and zinger throwers, and that’s what he has in this movie. It is such a joy listening to reporter Scotty (Douglas Spencer) keep shouting “Holy cats!” at every bizarre moment; or Cap. Hendry exchanging sexy “why don’t you marry me?” banter with Nikki; or the deranged Dr. Carrington (Robert Cornthwaite) demanding that everybody in the base should willingly die for the sake of knowledge. This is all fantastic stuff, and if anybody complains that it feels “silly” or “starchy,” I’m getting out the flame-thrower. If you need a naturalistic counterpart to this film, it already exists and it’s called The Thing. We can have both. (Wait, there was a third Thing, right? I seem to recall … oh, never mind.) 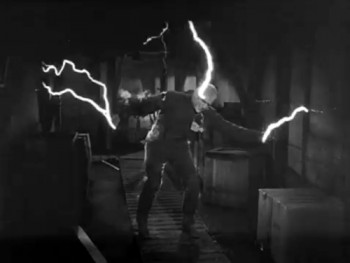 If there’s one element I can complain about with The Thing from Another World, it is the design of the title beast. The Thing looks like Universal’s Frankenstein Monster in a Star Trek uniform; it simply lacks majesty. Arness (who would later star in another ‘50s SF classic, Them!) invests the Thing with tremendous energy to compensate, and the camera keeps the creature off screen most of the time, so the bland look doesn’t damage the film much. The first time audiences get a clear look at it comes in an explosive moment that is guaranteed to make people rocket out of their seats.

The movie has one of the few on-screen appearances of the Master of the Voice Over, Paul Frees. If one of the actors at the base sounds as if he’s being dubbed, that’s because Paul Frees is playing him and he dubbed just about everybody. Aside from a million jobs as a voice artist, Frees was the ubiquitous “radio announcer” in many ‘50s SF films. Whenever a character has to tune into a plot-specific news station in one of these movies (“Authorities now recommend that all citizens stay in doors until the giant aphid attack has passed.”) it’s Paul Frees at the mic.

Another piece of trivia: actor William Self, who plays the poor sap who unfreezes the Thing with an electric blanket, would go on to produce the pilot for something called The Twilight Zone eight years later.

The Thing from Another World is worth revisiting if you’ve just taken in John Carpenter’s movie as tonic for the re-make. It is a window into the birth of a genre that still delivers the basic goods: fun scares and sharp characters. The film has “dated” only in the sense that we are more aware of the politics of its making and the way it set the rules for other films. As entertainment, there isn’t anything dated about it at all. It sits comfortably beside The Thing ’82 as a classic of science-fiction horror.

And, it goes without saying… 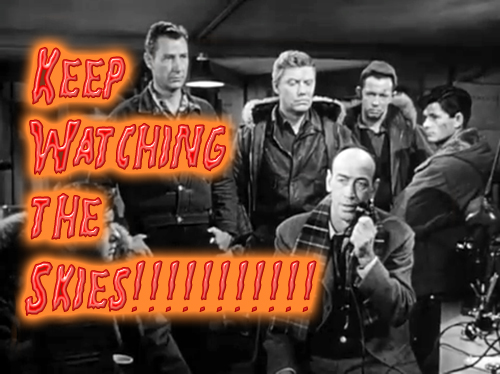 and it shows in the crisp, sharp dialogue and crackling sense of humor.

Now you’re talking. It’s monster-movie month in our house, and this one is on the list.

Bravo! Watching The Thing 1951 is a yearly ritual. A childhood favorite that has never lost its appeal. Years ago I wondered what the film would have been like if the screenwriters had shown The Thing disguised as the “assimilated” humans(the same but different people, changed into cold-blooded automatons) and then climaxed the film with a major confrontation when the Thing’s true appearance is discovered to be a monster. But then, it would have been a rip-off of Invasion of the Body Snatchers. So I quickly shelved that thought. The Thing 51 works exceedingly well just as it is. The only thing wrong with it is The Thing’s costume, as Ryan has already pointed out. After 60 years, this film still retains its edge, its pacing, and its element of horror.

[…] than three times; first as The Thing from Another World in 1951 (read Ryan Harvey’s review here), then by John Carpenter in the classic The Thing (1982), and finally in the modern prequel, The […]