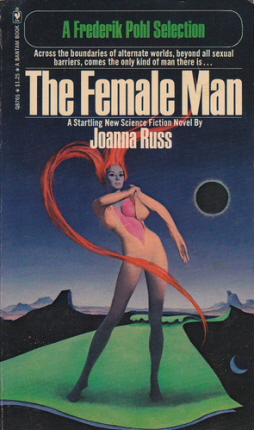 Joanna Russ, acclaimed feminist writer and one of the most respected science fiction authors of the 20th Century, passed away yesterday at the age of 74.

Russ’s first SF story, “Nor Custom Stale,” appeared in F&SF in 1959. Numerous notable short stories followed, including Nebula Award winner “When It Changed” (1972), and Hugo Award winner “Souls” (1982). Altogether her fiction has been nominated for a total of nine Nebula and three Hugo Awards. Her short stories were collected in four volumes:  The Adventures of Alyx (1983), The Zanzibar Cat (1983), Extra(ordinary) People (1984), and The Hidden Side of the Moon (1988).

Her first novel Picnic on Paradise, the tale of a pleasure cruise that crash lands on a vacation planet with only enough food for a picnic, was nominated for a Nebula in 1968. It was collected with four additional stories featuring the resourceful protagonist Alyx as The Adventures of Alyx (1983).

The Female Man, one of the most acclaimed SF novels of the decade, follows four women across four parallel worlds, all struggling against the restrictive role of the female sex, and what it truly means to be a woman. The character who bears Russ’s first name, “Joanna”  refers to herself early in the novel as the “female man” because she is convinced she must surrender her identity as a woman to be respected. 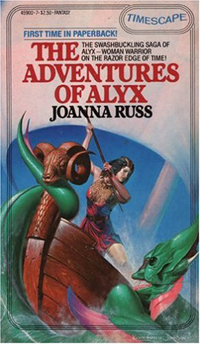 Annalee Newitz, in her terrific Russ retrospective at io9, calls it “Sliders as written by James Joyce. And it’s possibly the greatest book about what it’s like to be a woman in America that I’ve ever read.”

Russ went public as a lesbian later in her life, as her critical writing and other non-fiction became more noted — especially the landmark feminist work How to Suppress Women’s Writing (1984), and the Hugo-nominated To Write Like a Woman: Essays in Feminism and Science Fiction (1995).

Beginning in the late 1980s Russ began to cope with a growing number of physical ailments, especially back problems and  chronic fatigue syndrome, which all but ended her writing career. She entered hospice care earlier this month after suffering a number of strokes, and passed away on Friday, April 29.

A more detailed obituary can be found at Locus Online, and a complete list of her work is at her Wikipedia page.

If you’ve never read anything by this remarkable woman, I urge you to try The Adventures of Alyx, The Female Man, or any of her thought-provoking short fiction. You won’t be disappointed.

In due time the police chased Alyx’s coreligionists down the Street of Heaven and Hell and out the swamp gate to be bitten by the mosquitoes that lie in wait among the reeds, and Alyx — with a shrug of contempt — took up a modest living as pick-lock, a profession that gratified her sense of subtlety.

Are you toxic?
Are you edible? I am not edible.
We humans do not regenerate.
My companion is not edible.
That is my ear.
I am toxic.

— “Useful Phrases for the Tourist”

They had discovered immortality. Oh not for people, not at all; it was Houses that were immortal.

Take my life but don’t take the meaning of my life.

Marvelous stuff. Thanks for sharing.