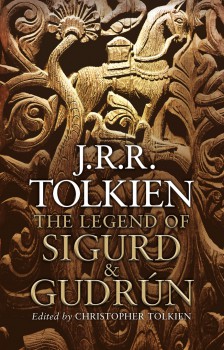 If you like the sound and rhythm of words — and if you’re a hopeless J.R.R. Tolkien junkie — you’ll like The Legend of Sigurd and Gudrun (2009, Houghton Mifflin Harcourt). Lacking either of these prerequisites, you probably won’t. And there’s not much more to say than that.

Casual Tolkien fans likely won’t buy The Legend of Sigurd and Gudrun, and even semi-serious fans who have tackled The Silmarillion may lack the appetite for it. It consists of two long poems, around which are sandwiched an exhaustive introduction and a pair of lengthy explications/footnotes, the latter written by Tolkien’s son Christopher. Added together, this additional material is longer than the poems themselves.

The real reward of The Legend of Sigurd and Gudrun is its wonderful language. The poems—“The Lay of the Volsungs” and “The Lay of Gudrun”—are composed in eight line alliterative stanzaic metre. Reading them makes me wish I knew the native Old Norse Tolkien of which Tolkien spoke so admiringly; the modern English is pretty darned powerful already.

For example, this description of Ragnarok from “The Lay of the Volsungs”:

The horn of Heimdal
I hear ringing:
the Blazing Bridge
bends neath horsemen;
the Ash is groaning,
his arms trembling
the Wolf waking,
warriors riding.

The sword of Surt
smoketh redly;
the slumbering Serpent
in the sea moveth;
a shadowy ship
from shores of Hell
legions bringeth
to the last battle.

Another favorite passage of mine is this description of a bloodbath in the halls of Atli of Hunland, in which the outnumbered Niflung heroes fight to the last man:

There hot and smoking
fell hissing embers,
and plashed and sputtered
in the pools of gore.
Reek was round them,
a rolling smoke;
dank dripped their sweat—
the doors were held.

Their shields they raised
over shattered helmets;
they stamped the brands
on streaming floors.
Blacktongued with thirst
blood there drank they;
fell one by one
on the ways to hell.

Tolkien at times drew upon a similar archaic construction while writing The Lord of the Rings, which is one of the reasons why it packs such power and resonance. For example, Tolkien writes Stern now was Eomer’s mood, and his mind clear again; whereas a modern author might substitute Eomer cleared his mind, and his mood grew stern. I prefer the old, Tolkienian style.

Tolkien scholars will find a lot to like in the essays, particularly “Introduction to the ‘Elder Edda,’” Tolkien’s lecture on Old Norse poetry. Though it’s edited by his son, Tolkien delivered the essay orally, thus it lacks the restraint you’d expect in a print piece. Writes Christopher, “It is primarily in order to hear the voice of the author of the poems presented in this book, writing (in order to speak) personally and vitally of the Poetic Edda, on which he has never been heard since he last lectured on Old Norse at Oxford some seventy years ago, that I print it here, in its later form.”

Here’s a sample of Tolkien’s unguarded voice from the “Introduction”:

There remains too the impact of the first hearing of these things after the preliminary struggle with Old Norse is over and one first reads an Eddiac poem getting enough of the sense to go on with. Few who have been through this process can have missed the sudden recognition that they had unawares met something of tremendous force, something that in parts (for it has various parts) is still endowed with an almost demonic energy, in spite of the ruin of its form….Old English verse has an attraction in places that is immediate. But Old English verse does not attempt to hit you in the eye. To hit you in the eye was the deliberate intention of the Norse poet. 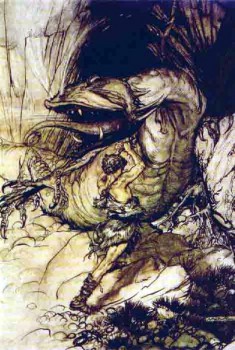 “The Lay of the Volsungs” and “The Lay of Gudrun” are ancient stories—Sigurd and the slaying of the dragon Fafnir is a well-known tale—but the poems themselves are not translations. Rather, they are Tolkien’s attempt to unify the tale’s disparate threads. Differing versions of the stories appear in a handful of Old Norse texts, including the lays of the Poetic Edda and the Saga of the Volsungs. These were copied down by various scribes over the centuries, and so contain inconsistencies and even outright errors (or so Tolkien believed). The tale of Sigurd also lacks an important central section, eight pages believed to be torn out by a thief. The Legend of Sigurd and Gudrun is Tolkien’s attempt to create a single, coherent narrative of the scattered legends. In my opinion he succeeds.

The action of the poems are set in a time (to quote Tolkien) “of the fading of a special, individual, pagan culture, not elaborate materially, but in many ways highly civilized, a culture which had possessed not only (in some degree) an organized religion, but a store of partly organized and systematized legends and poetry.” Heroic deeds abound and the gods themselves make appearances, including Odin, who often appears in disguise, recognizable only by his familiar one-eyed visage. There’s fell betrayals and murder and awful acts of vengeance, horror in the halls of vikings. And of course, it’s Old Norse, so you know the tale is not going to end well. “The Lay of the Volsungs” and “The Lay of Gudrun” are not for the faint of heart, and proof that Tolkien is capable of summoning a bit of “demonic energy” into his own writing.

It’s also interesting to see the elements Tolkien would later work into his own stories of Middle-earth: A dragon slain by a hero, a broken sword reforged, and a great ring that brings with it great woe.

I don’t rate The Legend of Sigurd and Gudrun as highly as the previous release from the Tolkien Estate, The Children of Hurin, which in my opinion is a must-read and among the best books I’ve read in the last three years. But it nevertheless belongs on any serious Tolkien fan’s bookshelf.

Thus glory endeth,
and gold fadeth,
on noise and clamours
the night falleth.
Lift up your hearts,
lords and maidens
for the song of sorrow
that was sung of old.

[…] his own writings. One of his lesser known works, which I had never heard of until coming across a blog post about it, really exudes that old Germanic essence. And what can be more Germanic than the ancient […]