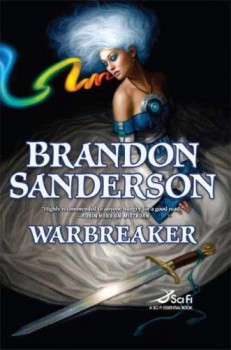 In the stand-alone fantasy novel, Warbreaker, Brandon Sanderson, best known for his Mistborn trilogy, gives us a story in which the goal is not to fight and win a war, but to prevent one from occurring. The rival kingdoms of Idris and Hallandren are on the brink of war based on a centuries-old dispute, and at the novel’s start it seems the only way for Idris to prolong the uneasy peace between the two realms is to fulfill the letter of a treaty signed at the close of the last war. The treaty stipulates that when the Idrian King’s oldest daughter reaches her majority, the King will provide a daughter in marriage to the ruler of the Hallandren – a fantastically powerful immortal monarch known as the God-King.

The catch is, the treaty doesn’t specify exactly which daughter the Idrian king had to provide in marriage.

Vivenna, the King’s eldest and most-favored daughter, had been trained from birth to be a wife to the God-King. But the Idrian King cannot bear to part with her, and sends instead his youngest daughter Siri, a girl as free-spirited and undisciplined as her older sister is serious and sober-minded. Thus the events of Warbreaker are set in motion as the ‘wrong’ daughter is sent from her mountain home to the fabulous Hallandren capital of T’Telir, with her older sister – shocked by her father’s actions and concerned for both Siri and the fate of their two kingdoms – running away to follow close on her sister’s heels. Once in T’Telir, both sisters get embroiled in plots and counter-plots that may mean a disastrous war for their homeland.

Magic takes center-stage in Warbreaker, and here Sanderson has crafted an interesting system called BioChromatic Breath. A person’s ‘Breath’ is their measure of magical power, ranging from one Breath for a normal person, to fifty or so for a relatively well-off individual, to thousands in the case of magicians called Awakeners. Having a certain amount of Breaths makes a person more alive – for example at fifty Breaths colors seem sharper and a person’s inherent Breath level can be seen, and at two thousand a person ceases to age. Breaths can be freely exchanged between people – even sold – as well as invested into objects. To ‘awaken’ objects, the primary form of magical manipulation in Warbreaker, a person needs to touch a source of color, which is drained away to a lifeless gray, as well as expend a certain measure of breaths.

It is an interesting, intricate system, intellectually pleasing for fantasy fans that like to see the rules of a system played with and utilized in clever ways. An awakened object can be given simple commands, such as ‘hold’ or ‘hold when I throw’ or ‘defend me’ – thus a rope could be awakened to trip up an attacker, a tapestry to bind an intruder, or even a person’s clothing may be awakened to become an exoskeleton of sorts.

And magic – specifically different attitudes toward it – is where the culture-shock that is one of the strengths of the novel comes into play. Siri and Vivenna’s mountain home of Idris is a bland and colorless place because the people there live in fear and revulsion of Awakeners and magic in general, believing it unnatural. Hallandren, by contrast, is a riot of colors, where Awakeners parade openly in the streets, Breath is bought and sold like any other commodity, and a pantheon of living deities, the Returned Gods, are worshiped.

For reasons never explained in Sanderson’s world, people who die ‘worthy deaths’ are occasionally and inexplicably returned to life. They have no memory of their past, and they return as immortals with perfect health and one mega-Breath that is the equivalent of thousands of normal Breaths. Such gods must be fed a Breath a week lest they die – something their worshipers in Hallandren are all too eager to provide. One such god, Lightsong, is the third major character in Warbreaker. Lightsong is Sanderson’s show-stealer, with a playfully sarcastic attitude completely subverting not only his supposed role as ‘god of bravery,’ but the whole of Hallandren’s religious and philosophical beliefs. From the highest echelon of his society, Lightsong questions his role, his past, and the forces conspiring around him to move to war, and the reader is invited to do likewise.

Siri, the ‘wrong daughter’ destined to marry the God-King, soon discovers the importance of questioning the surface truths of the cloistered world of the palace in which she finds herself. After spending most of her young life rebelling against the notion of royal duty, Siri ironically finds the enforced indolence of her new, sheltered role of royal wife insufferable. She soon learns that her husband is not at all the terrible divinity she was lead to expect, and Siri’s conversations with a friendly Lightsong and a palace functionary dubbed Bluefingers are one of her only sources of information in a world that seems to be edging closer to war with each day.

Her sister Vivenna, meanwhile, makes contact with her father’s spymaster in T’Telir – a man who literally grants Vivenna his dying Breath. Breath, which is a sign of status and power in Hallandren, was necessary for his job and Vivenna, taught all her life to regard the exchange of Breath and, especially, its hording, as an evil, must suddenly come to terms with the hundreds of Breaths she now possess. Adopting the deceased spymaster’s mantle, Vivenna sets out to rescue her sister and subvert the impeding war between Idris and Hallandren with the aid of a pair of wise-cracking mercenaries formerly in the spymaster’s employ. On the way she encounters Vasher, a mysterious and ruthless Awakener with a sentient sword we are introduced to in Warbreaker’s prologue, a man whose motives are unclear.

Warbreaker offers plenty of intrigue, turn-about, and double-dealing – though it may be a bit short on action for the tastes of some fans of fantasy. Its premise and focus are refreshing, and the political maneuvering and plotting – if a bit simplistic – are nonetheless compelling reading. A trio of appealing characters forms the heart of the novel, and each has their own journeys toward maturation: Siri, who discovers love and duty, Vivenna, who wrestles with her conscience and learns a thing or two about realpolitik, and Lightsong, who transforms into the god of bravery he was always meant to be.

But the real star of the book would have to be its magic system, a well-thought out and intriguing premise with enough rules and ephemera (there is an appendix in the back explaining the various ‘Heightenings’) to satisfy a D&D junky. The system allows for petty magics such as trip ropes all the way up to large-scale stuff like Hallandren’s standing army of Lifeless soldiers – dead bodies that have been awakened with Breath to serve as fighters. If I had one criticism about the system, it would be that Sanderson spends too much time on awakened clothing and ropes and the like that such things become repetitious – and, truth be told, faintly ridiculous. The notion that an outfit of ‘tattered’ clothing – with strings hanging off of it to wrap around the wearer’s fingers to make them stronger – would be such a powerful artifact, or that Awakeners go around with tons of colored handkerchiefs in the pockets, is all logically consistent with the BioChromatic system, but at some level I did not find it viscerally satisfying or believable.

And BioChroma itself evokes the importance of color in the world of Warbreaker, something I did not see reflected thematically or stylistically in the book. Sanderson’s prose is workmanlike, it flows well, but seldom reaches heights of poetic or imagistic language. In a book where color is predominant, where magic itself depends utterly upon it, and where the setting is the most magical and vividly colored city on earth, I expected a bit more in the way of colorful prose. But Sanderson is not a very visual writer, and again and again things are described merely as ‘richly colored’ or ‘vivid,’ and places or clothing contain ‘many colors’ – so we are told, when we really should be treated to a scene to take our breath away. This lack of stylistic virtuosity is more a failure to rise to the challenge suggested by the premise of the book than it is a flaw in the narrative – but, had Sanderson done so, he may have elevated a decent book into something more memorable.

In the end, that is how I would describe Warbreaker – a decent read. In areas where it is strong it is very strong, and portions of it approach the compulsive readability of the best page-turners. It is also a bit overlong at nearly 600 pages in hardback, and not quite at the level of immersion as the best in the genre. But it does have some nicely drawn and sympathetic characters, a novel and rationally constructed magic system, and a refreshing approach to war, conflict, and politics, and should satisfy fans looking for a lighter read in fat fantasy.

I’ve only read Mistborn by Sanderson, and it was disappointing to me personally, but with his popularity I’ve been curious to give this book or another of his stand-alones a try, but I don’t think I’d like this either.
I prefer fantasy where the magic isn’t as prelavent; it skirts the edges like a shadow. The characters know its there, but only a few venture into it. But, what really turned me off about Mistborn and what this book seems to do too, is it makes magic too scientific, or like a super-power. To me when you do that with fantasy, you might as just change the elements of the story and make it sci-fi.

“it makes magic too scientific, or like a super-power. To me when you do that with fantasy, you might as just change the elements of the story and make it sci-fi.”

Totally agreed. To me books with heavily detailed magic systems are science fiction with alternate universe laws of physics. Nothing wrong with that but not really my thing.

[…] “the cure for trilogy fatigue” (not to be outdone, our Reviews Editor Bill Ward also noted that portions “approach the compulsive readability of the best […]