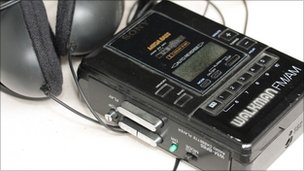 The woman held in one hand a small cigarette-package-sized radio, its antenna quivering. From this sprang tiny copper wires which ended in a dainty cone plugged into her right ear. There she was, oblivious to man and dog, listening to far winds and whispers and soap-opera cries, sleep-walking, helped up and down curbs by a husband who might just as well not have been there. This was not fiction.

This was Ray Bradbury, quoted in Kingsley Amis’s New Maps of Hell, in observing that the “seashells” he had made up for people to listen pressed against their ear had actually been invented with the transistor radio (a very, very, very primitive iPod, for you youngsters).  Ray’s point was that the seashells transported people into artificial environments that imperiled human interaction.

This quote appears on the back of my Ballentine Books 1962 paperback edition of Fahrenheit 451 (purchased when I was in sixth grade for the enormous sum of 50 cents).  As you should know, the novel is an indictment of a media-obsessed dystopia that burns books so people aren’t exposed to disturbing ideas and can be kept “happy” with mindless entertainment.  This was written in the early 1950s, and while Bradbury may not have had the details right (and that’s never been his interest), he certainly anticipated our Internet Age (which Ray has described as a “waste of time”).

While the transistor radio may have been the first step, the real giant leap in which we’ve beomce technological islands unto ourselves was the invention of the portable cassette player, the  Sony Walkman, in 1979. With the transistor radio, you listened to what someone was playing for you, usually for the purpose of selling you something. With this clunky piece of machinery, you could choose what you wanted to listen to, wherever you wanted to listen to it. Not quite as passive as today’s MP3 player as you actually had to load into it a a cassette tape, the contents of which you may actually have put some effort into creating as your own personal playlist, without the assistance of a computerized “genius” that’s supposed to know your tastes for you.

The Walkman officially no longer roams the Earth. Sony has announced that production has shut down. Another era has passed.  Alas, Bradbury’s vision of a witless America hasn’t.