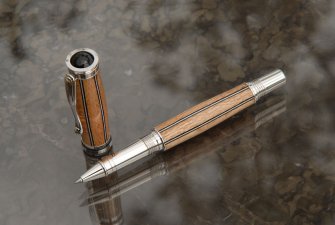 Jeff Crook, the mastermind behind The Harper’s Pen Award, has announced some changes to the Award, and opened up membership to the Sorcerer’s Guild, the voting body.

The time has come to start thinking about nominations for the next Harper’s Pen Award. That means it’s time to unlock the adamantine doors of the Sorcerer’s Guild and open our membership drive. The Sorcerer’s Guild is an autonomous anarcho-syndicalist collective of fans, editors and authors of the short fiction genre commonly known as Sword and Sorcery (cue lights, smoke, thunder). We gather once each year to trade spells and knitting patterns and select the winner of the presigious and lucrative Harper’s Pen Award. The 2009 winner was John C. Hocking for his story “The Face in the Sea” published in Black Gate #13.

Beginning this year, you must be a member of the Sorcerer’s Guild to nominate a story for the Harper’s Pen. Cruel, I know, but we must maintain some standards. Luckily, joining the Sorcerer’s Guild is not only easy, it’s rewarding, because we are prepared to offer the first 100 new members a pdf download of Black Gate #14. Yes, that’s right – by joining today, you will receive a free magazine of the some of the best Sword and Sorcery short fiction being published today.

The complete announcement is here.

If you’re interested in Sword & Sorcery or short fiction, or nominating authors for the Harper’s Pen Award, joining the Sorcerer’s Guild could be extremely rewarding — and not just for the free issue of Black Gate.

Since I have a subscription to just about every S+S friendly print and online mag, and have been reading the stuff since I was about seven, I think can help out.