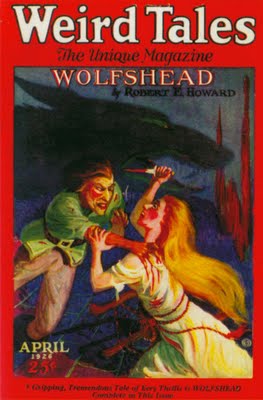 Last week, when I answered the call to a group celebration of Robert E. Howard’s birthday, I originally chose to write about his breakthrough short story, “Wolfshead.” Somehow, I got sidetracked and ended up typing out a personal reflection on the first Howard story that I ever read, “The Fire of Asshurbanipal.” But I still have my notes about re-reading “Wolfshead” (now easily available in The Horror Stories of Robert E. Howard from Del Rey) and it seems a shame to waste them. So here are some thoughts on this early and often reprinted work and how it helped set off the Great One’s career.

Plus, today is my birthday, and I get to do whatever I want. (Told you it was close to Howard’s. Please also wish Jason M. Waltz, Australia, and Paul Newman a happy birthday as well. A bit tough in Paul’s case . . . oh well.)

One reason that “Wolfshead” occurred to me as a topic is that a re-make of the classic Universal film The Wolf Man (elided into The Wolfman) comes out in theaters next month. The film has gone through enormous production and post-production hell and numerous delays, so I’m skeptical about its quality. I hope—fervently hope—that the film works beyond expectations, because right now werewolves need a boost. Vampires and zombies seem to run the horror world right now—they have always been far more budget-friendly than werewolves—but I would joyfully welcome a werewolf Renaissance. Of all the classic European monsters, the werewolf has always been my favorite. “Wolfshead” was a story that was ahead of its time in the way that Howard changes around the shapeshifter myth; in many ways, current werewolf stories haven’t quite caught up to him.

“Wolfshead” first appeared in Weird Tales for April 1926. Howard was fresh to the magazine, as well as to a wide audience; his first story, “Spear and Fang,” was published in July of the previous year. “Wolfshead” is a sequel to his second story to appear in Weird Tales, “In the Forest of Villèfere,” from August 1925. “In the Forest of Villèfere” is a short piece about a traveler, Montour of Normandy, who makes another traveler’s acquaintance in the titular wood at night. By moonlight, Montour discovers the horrifying true nature of his companion. The story concludes on an ambiguous note, but Howard answers this mystery in the more epic canvas of “Wolfshead,” his third appearance in the Unique Magazine, less than a year later.

Compared to much of what Howard would publish in the 1930s in Weird Tales, “Wolfshead” is clearly neophyte work; a talented youth whom scholar Rusty Burke described as “marked by a creative exuberance that is only barely under control.” If “Wolfshead” is sometimes sloppy in its plotting, and seems like a sketch for a novella or even an full novel crammed into the fences of a short story, at least it’s constantly in motion and throwing surprises at readers.

Howard takes the standard werewolf fable of “In the Forest of Villèfere” and places it in the setting of an adventure on the edge of “the Dark Continent” of Africa. He combines a reversal on the notion of a werewolf (one more writers should explore) with spirit-possession, a parlor room murder mystery, swashbuckling, and a massive native uprising, to create a heady stew of horror and heroism. The highlight of the story is the tale that Montour—the first-person character of “In the Forest of Villèfere” but now the mystery figure—tells to the narrator, Pierre. It’s a piece of fantasy world-building unusual for a horror story of the day, but something that would turn into a Howard trademark. In Montour’s breathless secret history of the planet (“In the beginning, the world was strange, misshapen. Grotesque beasts wandered through its jungles. Driven from another world, ancient demons . . .”) readers can see emerging the author who would change literature of the fantastic forever. That the apparent monster should also turn into the hero is simply the flourish to finish off the crazy, experimental voyage Howard takes. 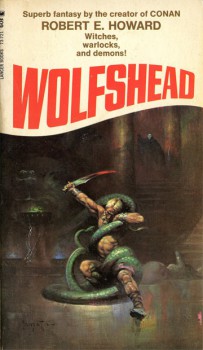 Farnsworth Wright, famed editor of Weird Tales, liked “Wolfshead” so much that he made it the cover story for the magazine. This also led to a misplacement of the manuscript when it was sent to artist E. M. Stevenson (who only did five covers for Weird Tales, none terribly impressive). Howard had to re-write the story from memory in a hurry, as he didn’t have a carbon copy available. The original manuscript was eventually found, all except the first page, for which the first page of the re-write was substituted. This certainly shows how dedicated the author was to his newly emerging success. He netted an extra ten dollars for his efforts, giving him a total of fifty bucks for the story . . . a nice sum in 1920s rural Texas.

And “Wolfshead” was a success. Both “Spear and Fang” and “In the Forest of Villèfere” feel like vignettes culled from the slush pile to fill in gaps in the magazine’s table of contents, but the third story showed that Weird Tales had a new star—and it got the attention of a Mr. H. P. Lovecraft. Howard was suddenly somebody to watch. And he delivered.

“Wolfshead” has been anthologized numerous times, first re-appearing in Arkham House’s monumental Howard museum Skull-Face and Others in 1946. It was the headliner of a popular Lancer Paperback published in 1968 and throughout the 1970s until Bantam took over its printing (this volume also contains three other classics: “The Black Stone,” “The Valley of the Worm,” and “The Fire of Asshurbanipal”). Baen published “Wolfshead” in its 1996 mass-market paperback Eons of the Night, and Wildside Press included it in 2005’s Shadow Kingdoms: The Weird Works of Robert E. Howard, Volume 1.

Typical of writers looking back on their work, Robert E. Howard apparently didn’t think highly of “Wolfshead” later—even claiming that reading over it made him so despondent he went and got a job at a soda fountain. From one of his letters:

. . . I’m not altogether sure I wasn’t off my noodler when I wrote it. I sure mixed slavers, duelists, harlots, drunkards, maniacs, and cannibals reckless. The narrator is a libertine and a Middle Ages fop; the leading lady is a harlot, the hero is a lunatic, one of the main characters is a slave trader, one a pervert, one a drunkard, no they’re all drunkards, but one is a gambler, one a duelist and one a cannibal slave.

I think Howard makes his story sound more exaggerated than it actually is. He would eventually write tales with an even more bountiful mix of bizarre elements, although he would have them under the guidance of firmer and more experienced hand. But he was already aware of the way he was mixing genre conventions, and thankfully, he kept right on doing it.

I’ll have to make a point of reading it: maniacs, cannibals, harlots, perverts and drunkards to boot…sounds like too much fun to pass up.