In the mail today, just in time for Halloween, is the blood-spattered graphic of the October/November 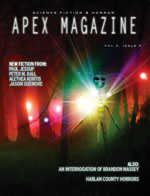 cover of Black Static magazine, the horror and dark fantasy counterpart that alternates monthly appearances with Interzone science fiction published by the folks at TTA Press. The artwork is by David Gentry.  The stories are:

Also just out is dark fiction from  Apex Magazine, available in pdf, web, Kindle and even good old-fashioned print. The October issue features short stories by Alethea Kontis (“A Poor Man’s Roses”), Peter M. Ball (“To Dream of Stars: An Astronomer’s Lament”), Jason Sizemore (“Yellow Warblers”) and Paul Jessup (“Ghost Technology From the Sun”), and a poem by  J.C. Hay (“After, Thoughts–A Pantoum”).  There’s also an interview with Brandon Massey by Maurice Broaddus and recommended reading from  Ekaterina Sedia.