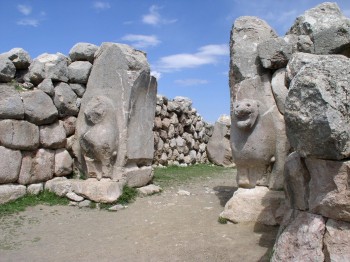 Hey, have you heard? Archie Andrews is going to marry Veronica Lodge. Good for him; I always had this thing for Veronica. I hope Archie isn’t in this only for the Lodges’ money. In celebration of this momentous moments of moments, I’m going to write about the Hittites.

I do not believe in transitions.

Until the nineteenth century, the term “Hittite” was an obscure one that appeared only in the Old Testament, where it apparently designated a tribe in Canaan. One strange reference in 2 Kings alluded to “Kings of the Hittites” and put them on the same level as the rulers of Egypt. What could that mean?

But the Hittites (or, as they called themselves, the People of the Kingdom of Hatti) made a shocking return to a world stage that they had once dominated when archaeologists and philologists uncovered the remains of a powerful, extensive empire—the first in Anatolian history—that ruled most of the peninsula during the late Bronze Age. The Hittites challenged the power of the New Kingdom of Egypt, wrestled down the Kingdom of Mitanni, and may have been a motivating factor behind an historical Trojan War. They also made extensive use of iron long before the actual Iron Age started. In the world of ancient Middle Eastern history, the Hittites are giants once again. They are also linguistic titans, because the language of the Empire, or at least the “court” language of Nesite/Hittite, is one of the earliest known example of an Indo-European tongue.

The Empire of the Hittites was one of the great “super powers” of the Late Bronze Age, and they were major foes of the Egyptians in the control of Syria. Yet for all this, the Hittites managed to almost completely vanish from historical memory for three thousand years. This incredible act of going undercover gives the Hittite Empire an aura of mystery and fascination that has drawn many lovers of history over the years. I’m one of them; the Hittites have held an enchantment over me since I first stumbled across their entry in the Encyclopedia Brittannica as I thumbed through it one day as an over-stimulated seventh-grader interested in the Ancient World.

We owe the re-discovery of the Hittites mostly to the Germans and general interest in the late nineteenth century in the new science of archaeology (although one could argue how much “science” was involved in the gut-instinct romantic approach of a man like Henrich Schliemann). The Hittites started to make their public reappearance in 1876 when A. H. Sayce, in a paper read to the Society of Biblical Archaeology, proposed linking various references to the Hittites in the Old Testament and in Egyptian inscriptions to basalt blocks in Anatolia covered with an indecipherable writing. The discovery in 1887 of the El Amarna letters, the correspondence of Pharaoh Akhenaten to the King of Hatti, trigged a flood of interest in the new civilization and encouraged excavations of their capital Hattusa, located in central Anatolia near the village of Boğazkale. Baked-clay tablets unearthed at Hattusa would shed light on the long history of the powerful empire—although a few years would pass before German scholars broke the code of language. 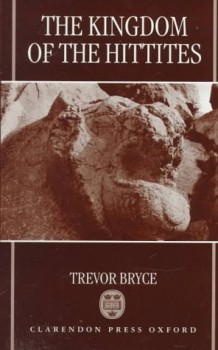 Even today, much of the research in Hittitology is in German, and English-speakers haven’t had has much exposure to recent studies involving the People of Hatti. Trevor Bryce has filled in many of the fresh discoveries in Hittitology for English-reading world in two books, The Kingdom of the Hittites (1998), which traces the historical events of the kingdom, and Life and Society in the Hittite World (2002), which deals with the cultural side of the People of Hatti. Previous to Bryce, the most easily available work in English was O. R. Gurney’s excellent broad survey The Hittites, but it was published in the 1952 and significant changes have occurred in Hittitology since then, much of it from ongoing excavations of Hattusa at Boğazkale.

The Hittite Empire arose in the 17th century B.C.E., and lasted until an abrupt and mysterious fall in the 12th century—part of a general Bronze Age collapse in the Eastern Mediterranean. Bryce’s English-language study has managed to create an extensive history for the Empire using surviving tablets, although huge gaps in chronology, and even confusion about the order of kingship, remain to tantalize. For lovers of history, the Hittites are like a great unfinished murder mystery to pick through and fill in with guesses.

And then there’s Kadesh. As in the Battle of Kadesh. (Or “Qadesh” if you prefer that spelling.) This clash in 1274 B.C.E. between the armies of Hittite King Muwatalli and the Egyptian Pharaoh Ramesses II over contested lands in Syria is one of the earliest battles for which the modern worlds has tactical information. Ramesses had ambitions of taking back all of the Egyptian Syrian possessions from the time of Tuthmosis III, and to this end he led a force to seize the strategically important city of Kadesh on the Orontes River. King Muwatalli brought his army to counter the Egyptians. Through the use of double-agents sent to Ramesses under the pretense that they were defecting, Muwatalli managed to spring a surprise attack on the Egyptian army. If it were not for sudden the arrival of reinforcements, Ramesses’s forces might have gotten completely routed. Both sides would write the battle off as a victory, but most historians today agree that it was at best a draw for both. “The likehood,” Bryce writes in The Kingdom of the Hittites, “is that after a desperate rally from Ramesses and the forces immediately at his disposal, the Egyptian army was saved at the eleventh hour from a devastating defeat, and the battle itself ended in a stalemate; both sides sustained heavy losses and neither emerged as the decisive victor” (p. 261). Gurney, in his earlier study, points to a “subsequent lapse of discipline on the part of the Hittites,” but attributes final victory to Muwatalli (p. 28). In the long run the Hittites did gain the greater advantage over the Egyptians: Ramesses failed to gain any territory, and the Hittites advanced into the Land of Aba. But “the conflict at Kadesh had seriously drained the resources of both Kingdoms. From this they would never recover. And Assyria continued to lurk menacingly on the sidelines” (Bryce, p. 263)

Another intriguing episode with the Egyptians occurred earlier, and ties the Hittites into the most famous Pharaoh of all, Tutankhamun. After the young Egyptian ruler’s death, his widow sent a request to Suppiluliuma I, the most powerful of all the Kings of Hatti, asking that he send her one of his sons as a husband, and that he would rule Rgypt. Suppiluliuma thought this sounded too good to be true, but after negotiations and another demanding letter from the widowed queen, the Hittite ruler sent his young son Zannaza south for the marriage. He never made to Egypt . . . and today we can imagine many scenarios for what happened to him. (My guess is a conspiracy by Egyptian generals. Or Zannaza might just have gotten bitten by an asp when walking down to the river to bathe one morning. Lots of things can go wrong in the Bronze Age during lengthy trips.)

There’s another fascination with the Hittites that centers around a question that always rises up when discussing them: “What role did they plan in a possible historical Trojan War?” Ever since the Swiss scholar Emil Forrer announced the discovery of what seemed like Hittite equivalents of famous names from Homer’s Iliad in tablets found at Hattusa, scholars of the Ancient Middle East and classical literature have sought for confirmation of the Trojan War through Hittites documents. The Hittites had consistent trouble on their Eastern borders, usually with a rebellious land called Arzawa, and one particularly interesting episode involves the machinations of a renegade Hittite named Piyamaradu who stirred up trouble in the region and constantly slipped away from justice. If the Greek civilization of the Bronze Age, “Mycenaean Greece,” had contact with Eastern Anatolia—as later Greek traditional poetry insists it did—it certainly would have dealt with the Hittite Empire’s interests in the region. And if there were indeed a battle at the city of Troy in Northeastern Anatolia when mainland Greeks besieged and sacked the town, it would have interested the powerful Hittite monarch of the time, Hattusili III. 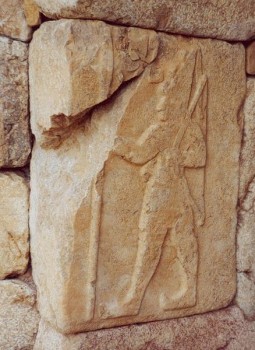 Although there is more to the civilization of the Hittites than their dealings with an allied city-state on the western coast of Anatolia called “Troy,” the trance of Homer is impossible to resist—especially for writers and romanticists. Recent excavations at the site of Troy on the hill of Hissarlık, recorded in the remarkable book Troy and Homer: Towards a Solution of an Old Mystery by Joachim Latacz (trans. into English in 2005), have made the Hittite connection to Troy stronger than ever before. Emil Forrer originally linked the mainland Mycenaean civilization with a kingdom that the Hittites called Ahhiyawa. The name matches closely with Homer’s word for the Greeks, Achaioí (“Achaeans” in most translations of Homer), which would have been spelled Achaiwoi in earlier Greek. Additionally, Hittite foreign office documents dealing with the nefarious Piyamaradu mention an Alexansandru of Wilusa, which may mean Alexander (an alternate name for Paris) of Ilios (Troy), which in the Bronze Age was probably spelled Wilios. The Hittite king acknowledged the “King of Ahhiyawa” as a “Great King” and on the level of the rulers of Egypt, Babylonia, and Assyria. Latacz’s extensive study of the recent evidence concludes that Ahhiyawa is certainly a Mycenaean civilization, and Wilusa is the citadel of Troy excavated on Hissarlık. This presents tremendous importance for the study of Eastern Anatolia in the Bronze Age.

Trevor Bryce is in agreement with these findings: “If we accept that the Ahhiyawans of the Hittite texts were Mycenaean Greeks, it is possible that the conflicts, or one of the conflicts, in Wiliusa was involved in the thirteenth century provided at least part of the historical foundation for the tradition of a Trojan War” (pp. 395-396). Leo Strauss, in his 2006 populist account The Trojan War: A New History, dashes off with the idea that the historical city of Troy/Ilios was an eastern-looking kingdom allied closely with the Hittites, and may have worshipped similar gods, like Tesub the Storm God, who would become Zeus in the Greek version of events. Strauss cannot help but toss a modern-sounding political reading of the situation: “To the Greeks, who laid claim to the Aegean island and who held a foothold in Anatolia, the Troad was a threat and a temptation, both a dagger pointed at the Greek heart and a bridge to the Hittites’ heartland” (p. 9).

These possibilities—and they remain only possibilities, although the evidence continues to grow—have only added more glamour to the Hittites. The People of the Kingdom of Hatti had an enormous affect on two worlds that have fascinated historians and writers for centuries: Ancient Egypt and Heroic Age Greece. Yet the Hittites had themselves disappeared for centuries, and when they burst upon the scene they re-wrote history in sweeping strokes. It seems impossible to imagine that there was an Ancient Middle East without the soldiers of Hatti and their swift chariots.

I feel sorry that Betty will end up with Jughead, however.