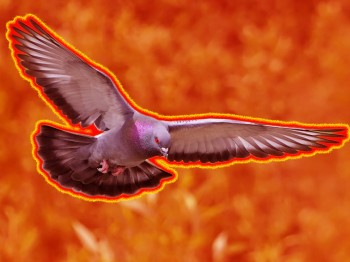 When other genre-lovers find out I’m a fan of Robert E. Howard, they often ask me what my favorite of his stories is. They probably expect I’ll name one of the Conan yarns, or perhaps a Solomon Kane or Kull story. (Kull is, indeed, my favorite Howard character.) If they already know something of my background in history, they may think I’ll name one of the Crusader stories that appeared in Magic Carpet Magazine.

But instead I say, without hesitation, “Pigeons from Hell.” And, after an inevitable moment of surprise, they always answer back: “Oh, that’s a great story! I had almost forgotten about that one!”

The irony of my love for “Pigeons from Hell” isn’t lost on me: I praise Howard for his foundational contribution to sword-and-sorcery and historical action tales, and yet my personal favorite story he wrote is a contemporary America-set horror story. But “Pigeons from Hell” is quintessentially Robert E. Howard from first word to last; Howard was an author who knew how to transform naturalism into the “weird tale,” and who also took great inspiration from the folklore of his small world of rural central Texas.

I’ll admit my memories of first reading “Pigeons from Hell” help secure it in my neural network as a favorite. You never forget the first sensations a story gives you, and any re-reading brings back those moments like drinking a Clark Ashton Smith potion of time-travel. I read “Pigeons from Hell” for the first time sitting in the upstairs room of a house on the beach of the Oregon coast. A fierce storm was raging over the ocean outside the glass doors and savagely buffeting the house shingles while I moved through the pages of the short story in my copy of Cthulhu: The Mythos and Kindred Horrors. It scared the, uhm, hell out of me. Fear isn’t an emotion you forget easily. 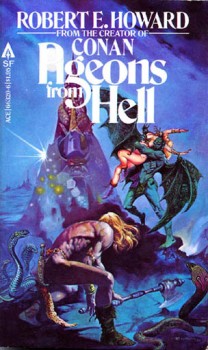 My strong personal emotions aside, “Pigeons from Hell” is an evocative and nasty piece of Americana terror that deserves listing among the best horror short stories ever penned. Howard took his inspiration from the ghost tales that his grandmother used to tell him, specifically one he mentioned in a letter: “. . . in many of her tales, also, appeared the old deserted plantation mansion, with the reeds growing rank about it, and the ghost pigeons flying up from the rails of the verandah.” The result is a piece that feels like something whispered around a campfire in the mountains on a windy and lonesome night, when the shadows draw too close, and the storyteller’s words make them press even closer. Steve Tompkins, in his introduction to the Bison Books anthology The Black Stranger and Other American Tales, calls this “one of the finest American horror stories, and one of the most American” (emphasis mine). I’ll examine what I think he means a bit later, because it is one of the aspects of “Pigeons from Hell” that makes it so remarkable.

Howard most likely wrote “Pigeons from Hell” in late 1934, with the Kline agency getting the manuscript in December. It wouldn’t appear in print until two years after Howard’s death, in the May 1938 issue of the only magazine that deserved to premiere it, Weird Tales.

Despite its title (which sounds better in Latin: “Columbae ex Infernis”) the story isn’t a Birds predecessor with packs of murderous pigeons taking vengeance on park-visitors who have gotten stingy with the breadcrumbs. Which, now that I think about it, would make for a pretty funny story on its own, but I digress. “Pigeons from Hell” is a tale about a lingering voodoo tradition in the contemporary (1930s) American south; to simplify it into current horror sub-genres, it’s a zombie story.

Beware, as from here on I shall divulge spoilers.

“Pigeons from Hell” begins with a classic horror device: travelers stop for a night in an abandoned house. Two New Englanders, Griswell and Branner, traveling through unidentified southern lands on a vacation, stop to sleep the night in an empty manor house among the pines. The story later identifies the creepy heap as Blassenville Manor, former home of a French-English family ruined in the Civil War. No one has lived in the house since 1890, but local legends hold that the pigeons said to flock on the balustrades are the souls of the dead Blassenvilles released from Hell. 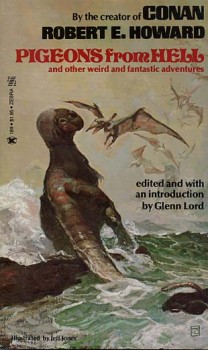 Griswell and Branner know nothing of this; the old deserted house “stimulated their imagination with its suggestion of antebellum splendor and ultimate decay.” But they pay a heavy price for their overnight camping. A strange whistling noise hypnotically draws Branner upstairs, and when he walks back down he carries a bloody axe—which was apparently used to split open his own head! Griswell runs like the devil out of the house, and I can’t blame him; Howard’s horrific revelation here is the point of the story that gave me the greatest shivers. Don’t read this part at night, I’m warning you.

Griswell runs into the local sheriff, Buckner, who goes back to house with the terrified New Englander to check on his crazy-sounding story. Inside the manor, they discover Branner’s corpse lying on the floor, head split and axe in hand. It looks bad for Griswell, but Buckner admits that something strange is happening here, backed up by a set of female footprints in the dust of the upstairs, and the sheriff holds back from charging Griswell for his friend’s murder until they can straighten out the hellish occurrences in the Blassenville Manor.

Buckner explains the weird history of the Blassenville family’s eventual extinction. The clan had West Indian plantation origins, and maintained a reputation for excessive cruelty toward their slaves, an attitude that continued toward their servants after the end of the Civil War. The family dwindled to three sisters and an Aunt Celia. Miss Celia had recently come from the West Indies and had a horrible streak of sadism—even for this family—and tormented her mulatto maid Joan mercilessly. Miss Celia and Joan vanished, and the last sister, Miss Elizabeth, claimed she found the corpses of her other sisters hanging in a secret room in the house. Elizabeth fled to the West Coast, and no one else ever discovered the hidden room she had described.

Buckner’s investigation takes him to an old black man, Jacob, who once practiced voodoo. Jacob admits he had given a potion for the creation of a zuvembie—a zombie with magical powers—to Miss Celias’s abused servant Joan, and that Joan must have made herself into an undead monster to haunt the house and take vengeance on Miss Celia. Once old Jacob finishes his story, he dies from a mysteriously sudden snakebite.

Buckner and Griswell return to the manor for an evening confrontation with whatever haunts it, and Howard’s prose again plunges the reader into an intense series of frights. The tale culminates with the two men discovering the hidden room with the hanging corpses of the Blassenville sisters, and the zuvembie of . . . Miss Celia. Joan had not, as Buckner guessed, made herself into a zuvembie to kill off the Blassenvilles. She had committed an even more sinister act of revenge: she slipped Jacob’s potion in Miss Celia’s food and left the living dead woman to a bloodthirsty existence. 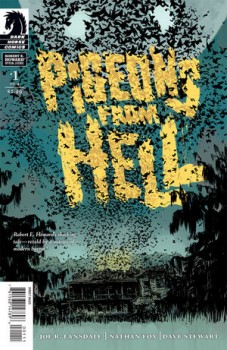 “Pigeons from Hell” is a viscerally powerful work of fright, moody with the Southern Gothic and swimming in atmosphere thicker than the Sargasso Sea. But what elevates it even above its effective shock-power is the Americaness that Tompkins mentions. Aside from its awareness of the American folklore tradition, the story confronts the terrible legacy of slavery in the United States and the aftermath of decades of Jim Crow racism and oppression. I can’t peg Howard’s exact motivation for writing “Pigeons from Hell”—I believe he was simply trying to bring to life the type of the story that his grandmother used to tell him—but intentional or not the story contains a powerful theme about race. It belongs to a sub-category of stories I call “colonial horror,” where an oppressive, dominant power finds itself at the mercy of an undercurrent of the culture of the dispossessed people. The two most famous stories of this kind come from Rudyard Kipling: “The Man Who Would Be King” and “The Strange Ride of Morrowbie Jukes,” both published in The Phantom ‘Rickshaw and Other Ghost Stories in 1888. Kipling certainly wasn’t anti-colonial, but these stories show an uneasiness about Britain’s position in India. Similarly, Howard’s story displays an anxiety in the South about race relations, one that also appears in another of his stories, “Black Canaan.” Racism still exists in the story’s setting, since Sheriff Buckner uses the “n-word” repeatedly throughout. The irony that a cruel, racist woman like Miss Celia, who was trying to practice slavery long after it had legally ceased, would end up a victim of a voodoo curse is strong and telling.

Howard digs into the dark underside of the “Dixieland” myth of the South. Griswell thinks about how his expectations of the region have drastically changed:

. . . [he feared] these ancient plantation houses that hid forgotten secrets of slavery and bloody pride and mysterious intrigues. He had thought of the South as a sunny, lazy land washed by soft breezes laden with spice and warm blossoms, where life ran tranquilly to the rhythm of black folk singing in sun-bathed cotton-fields. But now he had discovered another, unsuspected side—a dark, brooding, fear-haunted side, and the discovery repelled him.

Plenty of critics have written about Robert E. Howard’s racial attitudes, but he does show sympathy for the tortured mulatto girl Joan and the other victims of the cruel Blassenville family. Joan’s zombification of Miss Celia is a deviously appropriate one, and ultimately it is Celia who murders the three members of her family and leaves them hanging as corpses—a gruesomely poetic mirror of the lynchings that plagued blacks in the South for decades.

“Pigeons from Hell” does what many great supernatural horror stories do: it shocks us with fear of the unknown and the appearance of the impossible, but digs its claws into deeper fears and anxieties about our world beyond the page. It’s a masterful performance.

“Pigeons from Hell” remains one of Howard’s most popular stand-alone stories and has appeared in numerous reprints. It is currently available in The Best of Robert E. Howard, Volume 2: Grim Lands (Del Rey, 2007) and The Horror Stories of Robert E. Howard (Del Rey, 2008). It has also been adapted to other media: a 1961 episode of the television show Thriller; a 1988 graphic novel by Scott Hampton published by Eclipse Books; and a four-issue graphic mini-series by Joe R. Lansdale and Nathan Fox published by Dark Horse Comics in 2008, which updated the story to contemporary times.

The pigeon image is adpated from a picture in the Wikimedia Commons.

[…] August, I wrote an article about Robert E. Howard’s southern horror tale, “Pigeons from Hell,” my personal favorite work from the seminal fantasy author. That post contains a full spoiler-filled […]

[…] in this same volume, I would encounter what has since become my favorite Robert E. Howard story, “Pigeons from Hell.” But “The Fire of Asshurbanipal” still had a special meaning for me because it introduced to one […]

Throwback SF Thursday: The Horror Stories of Robert E. Howard, Part 3 | Every Day Should Be Tuesday

The Eclipse comic adaptation of the story is fantastic. The final reveal of Celia as the zuvembie still gives me pause.