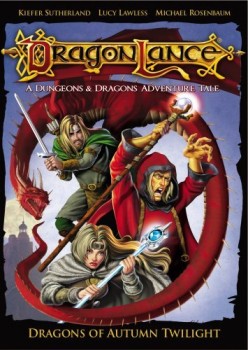 During one of the classic episodes of Mystery Science Theater 3000, while Mike and the ‘Bots are watching the conclusion of the delightfully weird and wretched 1960’s Coleman Francis masterpiece The Skydivers, Mike abruptly remarks: “I don’t know guys. I still like this movie better than Top Gun. A lot better.”

So I will say this about the recent animated film adaptation of Dragons of Autumn Twilight: “I still like this movie better than the 2000 Dungeons & Dragons movie. A lot better.”

Be warned: these will be the last friendly words you are likely to hear in this review.

If Wizards of the Coast, the current owners of the Dungeons & Dragons media franchise, had serious intentions of starting a successful line of direct-to-video animated films based on the Dragonlance and Forgotten Realms novels, they couldn’t have done a finer job of slicing themselves off at the knees with a broadsword than this disaster of a movie. The DVD came out in January, and the reason you probably haven’t heard much about it until now is because so many people are trying to abide by “If you can’t say anything nice…” Or else the film immediately slipped their memory after seeing it. Both concepts make sense.

The idea of straight-to-DVD animated films probably made perfect sense to Wizards of the Coast. Both Marvel and DC Comics have had enormous success with their superhero animated movies, most of which are of extremely high quality. (Superman: Doomsday completely embarrassed the live-action Superman Returns.) The Wizards of the Coast teamed up with Paramount and the director of Ultimate Avengers II to adapt the first of the successful Dragonlance novels from bestselling authors Margaret Weis and Tracy Hickman. If I were in charge at the company, I would have picked one of the Drizzt Do’Urden Forgotten Realms novels from R. A. Salvatore as a more focused starting place—and one offering better atmosphere—but WotC wanted to go back to the very beginning—the first D&D novel.

The team in charge of making the animated movie managed to line up some fine voice talent, with name actors like Keifer Sutherland, Lucy Lawless, and Michelle Trachtenberg, along with seasoned voiceover pros like Rino Romano and Fred Tatasciore. Unfortuantely, it appears that the voice talent grabbed most of the budget, leaving about $12.50 for Toonz Animation to do the actual animation work.

The ninety-minute DVD adheres closely to the plot of the novel, which is essentially somebody’s RPG campaign from twenty-five years ago and feels painfully like it. A “party” of varied character types (magic-user, paladin, warrior, dwarf, half-elf, etc.) gathers at a tavern, then goes out on a quest for magical items in deadly ruins while yelling for the gods of light to come aid them. Eventually, they become embroiled in an invasion of draconian armies of up to twenty. Pretty fearsome stuff.

Although the four hundred-page novel would seem difficult to cram into an hour and a half, the story is so episodic that it doesn’t have much problem fitting into the available space, with needless scenes sliced off, like a tedious affair using pots on chains for elevators. Weis and Hickman’s narrative isn’t complex, but it is dense with action, so at the very least the story of the companions questing for this or that, trying rescue so-forth and so-on, and then ending up in war to save the world, moves forward at a fast clip. All the characters from the novel appear, but the half-elf Tanis (voiced by Michael Rosenbaum) gets most of the attention, while characters like the warrior Caramon (voiced by Rino Romano from The Batman) and paladin Sturm Brightblade are reduced to background figures. At least this streamlines the action.

But the speed of the plot can’t rescue the wretched appearance of everything on screen. There’s no softening this: Dragons of Autumn Twilight looks horrible. The animation quality barely exceeds 1980s Saturday-morning quality. The character designs look adequate—if unimaginative—but their movements are sloppy and jerky. The effects animation appears slapped on in haste. Every action scene is embarrassing in how clumsily the figures move, resulting in zero excitement. The characters frequently distort physically, going off-model, and the attempts at emotion in their facial expression turn farcical. The voice actors don’t seem involved in their work either, especially Keifer Sutherland as the ambiguous wizard Raistlin, which only further damages the flat visuals. In fact, it it weren’t for the inclusion of extensive CGI-animation, you might guess that the movie came from the early ‘80s.

But don’t imagine for a moment that the CGI enhances anything. The computer-imagery is of lesser quality than what you see on most of today’s videogame platforms, and it’s so hamfistedly integrated with the cell animation that the results look like some kid came and plastered his sticker-book pictures of dragons onto your television set. The first fight between the companions and the computer-rendered draconians is screamingly funny in its clumsiness—certainly more laughs than you’ll find in any of the scenes that intend humor. On the opposite end, the finale of CGI Dragon vs. CGI Dragon while evil cleric Lord Verminaard forces the heroes to wear snake sunglasses is just plain sad to witness.

I warned that you wouldn’t hear any more friendly words in this review. Well, here are a few. The soundtrack from Karl Preusser is quite good, far more than the shallow animation deserves.

The only folks who might want to check out the movie are fans of the “Dragonlance” series—and they aren’t going to like what they see.

If there’s another animated “Dragonlance” film, I would suggest that…

So, basically I shouldn’t feel guilty about previewing this movie before paying a dime for it, right?

If you have Netflix, you can watch it instantly.

I can’t imagine that I’ll ever watch this cartoon.
But I might actually, possibly watch the Dungeons and Dragons film again. It’s sanity-threateningly bad, but…
Jeremy Irons delivers a performance so dizzyingly over-the-top that it almost separates itself from the rest of the show. When he’s on screen everything else dwindles to a background murmur. He’s like a bad middle school drama teacher on a Jim Morrison-level acid trip.
Oh, and Marlon Wayans plays a cute-n-funny sidekick who gets beaten, stabbed and hurled to his death from a castle tower. If more cute-n-funny sidekicks ended up like that, I’d watch more movies with cute-n-funny sidekicks in them.

Yeah, Jeremy Irons’s performance is an absolute treasure. He took the money, and instead of sliding off, he went hardcore throw it the nosebleed seats out-of-control. I’ll bet he knew director Courtney Solomon wouldn’t have the guts to tell him to tone it down. The way he snarls the line “Now–it’s–time–for–you–TO DIE!!!!!” almost made the movie worth it.

Wow — I heard this was bad; didn’t realize it was horrible.

I might punish myself with a quick look at it on Netflix, just so I can share in the pain, as it were.

Bill, I think it took me about three minutes into the film to realize I was in… big… trouble.

That’s because, 3 minutes in, you’re not even halfway done with the ridiculous expository scene that opens the movie!

I lasted about five minutes. Horrible.

I never would have gotten past five minutes if it weren’t for my “reviewer” obligation. The moment the sans serif font, “Who-Gives-Damn-Condensed,” popped up for the titles, I knew the whole enterprise was doomed. If you can’t even spring for a lively font…

[…] this would stand up well on a big screen. (For example of how wrong the CGI-and-Cel mix can go, see Dragonlance: Dragons of Autumn Twilight. Uhm, on second thought, […]