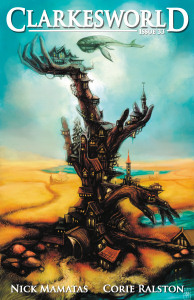 The interview was ably conducted and assembled by Jeremy L. C. Jones, who states:

Ultimately, fiction editors are the people who mine the slush pile for new voices and who push established writers to grow beyond their previous stories. They read story after story, and more pile up each day. They screen, sort, revise, and reject. They seek the new, the fresh, the familiar, the entertaining, and the weird. They discover and they miss out.

“There is no magic formula,” said Gordon Van Gelder of The Magazine of Fantasy and Science Fiction. And this holds true for writing stories, submitting stories, and editing stories.

Among other things, Jeremy asked his subjects What are some reasons why you’d reject a good story? and What does “fit” mean for your magazine?

This whole interview is a treasure trove of info for writers, whether you write science fiction, fantasy, or anything else.    — Filling Spaces

You can find the complete interview here.