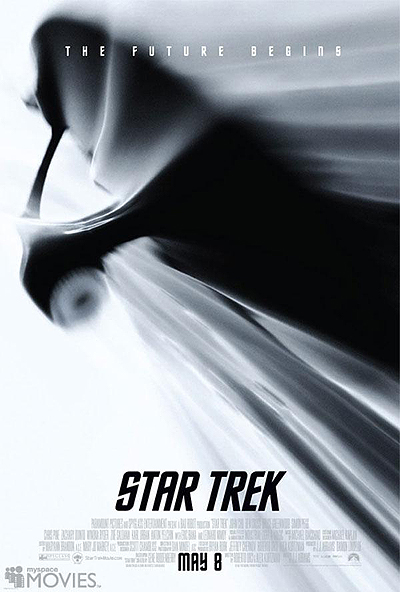 I wrote a review of the new movie Star Trek for my own blog within a few hours of seeing the film on Friday morning. I have nothing against that review, but it’s definitely the sort of free-form exercise I do on my personal blog, and it goes deep into the story and specific details for general readers. I never intended to put such a review on my Black Gate blog.

But Star Trek deserves it’s own take on Black Gate, one geared toward the specific audience. This isn’t truly a review, but an essay analysis of a cultural phenomenon that takes into account the many other reviews I’ve now read of the movie since I saw it (I purposely avoided reading others reviews before seeing the film) and the reaction of people I know who have seen it so I can paint a canvas of the sort of zeitgeist we’re experiencing.

Although Black Gate takes heroic fantasy as its theme, while the Star Trek franchise is science fiction, the people who read this magazine and its website belong to a genre community of which Star Trek forms one of the cornerstones. It doesn’t matter if you like Star Trek or not… if you count yourself a fan of anything that is “genre,” Star Trek has a place in your universe. Star Trek is the personification of “fandom.”

A few days before the new movie hit theaters, I wrote a short essay examining my own relation to Trek fandom. You can read that if you want to know where on the “Trekker” scale I stand, if that’s of interest to you regarding reading the rest of this essay.

This Star Trek film is a cultural moment, probably the largest in the series’ history since 1979’s Star Trek: The Motion Picture. It’s a popular cultural reconquista for a series that had gone moribund in the late ‘90s, and it achieves it through an embracing of the past infused with the energy of the present. In 1999, I talked to a hardcore Trek-fan friend and asked him why the enthusiasm seemed to be going out of Trek (Star Trek: Insurrection had done minimal business, nobody cared about Voyager, and the best of the later shows, Deep Space Nine, was off the air). His answer opened my eyes: The utopian space-exploration themes that made Trek what it is no longer spoke to people. Movie and TV viewers didn’t want to hear about benign imperialism and laissez-faire planetary discoveries any more. If they wanted science fiction, they would watch The X-Files or go see The Matrix. That was the important SF of the time. My friend even pointed toward the 1991 success of Terminator 2: Judgment Day as a beginning of a turning point toward people’s appreciation for gritty, urban, uglier science-fiction. I thought about it, and I decided he was right. “What Trek needs to do right now,” he concluded, “is go away for a while.”

Which, after the cancellation of the “who cares?” series Enterprise, it did.

And now a new Trek hits the screen, and critics, fans, and general audiences have expressed immense love for it—to the song of $76.5 million on the opening weekend, far exceeding Paramount’s hopes for $50 million, and a slew of praise in reviews across print and the blogosphere. Some bloggers have even gone as far as to declare it the best of all Star Trek films, better even than Star Trek II: The Wrath of Khan. I don’t agree, but the sentiment exists, and it doesn’t surprise me. A sudden rush of love can overwhelm all previous loves, if only for a short span. I think those opinions will ebb over time, but that isn’t my point. My point is that, right now, in this instant of space-time, Star Trek has suddenly made itself culturally significant again. People who felt a bit embarrassed at still liking Trek because no decent product had come from it in years received a swelling rush of euphoria that they could love it again. (This is certainly my feeling, and it’s powerful.) People who never cared for Trek, or knew it casually, find themselves enjoying the film and saying, “Why don’t they make more Trek films like this? I would have watched them!”

In all this, the film itself is actually irrelevant. The reaction trumps the movie’s content at this moment. And the movie has problems. Many of them, principally a script constructed on coincidence, a bland villain, an uninteresting score, and a feeling that it’s more a pilot episode setting up even cooler things to come. What’s amazing is that many reviews (such as this insightful one from a hardcore fan) are completely aware of these flaws. And they don’t care. That’s what makes this a major cultural moment. Trek as enjoyable and loved—even with problems—indicates a popular culture that wants to reclaim an old joy and at the same time feel it’s moving forward with the new.

This is exactly what J. J. Abrams’s Star Trek achieves. It brings back the old crew, characters most of us didn’t realize we had missed so much. It carries with it a ‘60s attitude of “boldness.” The term “boldy go” feels genuine again. The characters have new faces, and some have new interpretations, but they are our friends, gifted back to us while we were wandering in the wilderness. And when Spock “Prime” (Leonard Nimoy) appears to give this alternate universe its send off, we see a torch getting passed but recognize that the same fire burns from it.

Did I mention the film is a lot of fun? It is. Moves fast, character moments and humor hitting with almost jazz-ensemble precision. That way you won’t wonder where the hell the character Nero has been for the twenty-five-year gap in the story. (Hint: a sequence got cut.) Chris Pine’s interpretation of Kirk—one that avoids a Shatner imitation but nails the character—will carry us forward into the many sequels. But it’s Karl Urban’s literal re-incarnation of De Forest Kelley’s Dr. Leonard “Bones” McCoy that almost made me weep with joy. “Wow,” I thought to myself, “they really are all back.”

Yes, they are back. And for a moment, geeks, critics, non-fans, casual fans, teenagers, the elderly, scientists, philosophers, and your mother are sharing in a cultural warmth. What the film may do in the future, and how we may perceive of it after time has passed, will be an interesting topic for years to come.

But, at the moment…

THE FUTURE IS NOW

[…] Another decent blogger added an interesting post on Black Gate Blog Archive The Future Is NowHere’s a small excerptAnd for a moment, geeks, critics, non-fans, casual fans, teenagers, the elderly, scientists, philosophers, and your mother are sharing in a cultural warmth. What the film may do in the future, and how we may perceive of it after time … […]