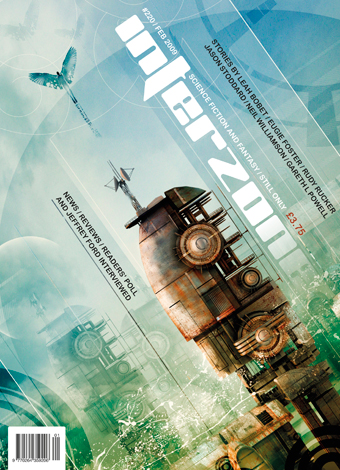 Back in June, Interzone published an edition dedicated to “Mundane SF,” which essentially means the story’s future speculative setting must be based on plausible science. So, no FTL, which virtually eliminates space opera, or telepaths or pointy eared aliens who speak English and act more or less like human beings except that they have pointy ears even though they live on planets light years away from Earth.  I guess. It all sounds to me like Hard SF in a girdle, and I don’t quite get it. You could, for example, group fiction that takes place only in New York City, or must involve farm implements, or that is first person narration by a transsexual. I mean, it might be interesting to read a collection of stories that take place in New York City, if only to say, “Oh, I recognize that restaurant where the characters are eating, I go there all the time,” but, beyond that, I’m not really sure how the categorization serves to help the reader to appreciate the author’s technique or critical perspective. Geoff Ryman’s introduction seems to say that one purpose of mundanity is to provide hope (and, indeed, his own contribution, “Talk is Cheap,” seeks to show how hope springs eternal in even direst circumstances). But, I’m not so sure why that should be the case. After all, On the Beach takes the mundane approach to the possibility of nuclear holocaust that is plausible, but certainly not hopeful.

I was thinking about this in reading the latest Interzone, which, with one exception, could be a mundane issue.  Not only in the sense of plausible scientific extrapolation, but also in the sense of, well, being mundane in trodding  familiar ground.  Not that this is necessarily a bad thing; the better stories here manage to unearth some disturbing ideas that are certainly relevant to our mundane existences.

Case in point is Eugie Foster’s “Sinner, Baker, Fabulist, Priest; Red Mask, Black Mask, Gentleman, Beast.”  Each day, the protagonist selects a mask that determines a different role playing situation.  No one in this society reveals their face beneath the mask.  Until, one day, a role play doesn’t follow the script.  Now from this description, you may think (as I did when I started reading), “Oh, wow, heavy, man, the masks represent how we are imprisoned in our various societal roles,”  and then stifle a yawn.  And it could have been that kind of  a story.  But, it isn’t, so don’t prematurely turn to the next story before finishing this one.  Foster delivers an ending that isn’t what you think it might be, and raises some unsettling questions about the connection between non-conformity and sociopathy.

“Spy vs Spy” by Neil Williamson clearly fits the mundane label; the technology the narrator uses to suureptitiously observe his neighbor, who the narrator fears is surreptitiously observing him, isn’t very far removed from all the social networking stuff that permeates the contemporary Internet experience for a lot of people (mostly people below a certain age) these days. Nothing hopeful here, though, but a dead-on portraiture of irrational human obsession.

Not so successful is Leah Bobet’s “Miles to Isengrad.”  A group of renegades have stolen an atom bomb, which they’ve loaded onto tractor trailer with the intent of dropping it down a volcano crater.  During the cross-country trip, various members of the conspirators drop out.  While a meditation on why we need to start worrying and not like the bomb that we need to be reminded of, especially in these post-Cold War, post-economic catastrophic times, I couldn’t connect with the characters and lost patience with the length and pacing. Nor did I quite get the purpose of the bomb’s seeming communication with the narrator.  That said, after all is said and done, the story redeems itself with a great concluding line that, unfortunately, aptly summarizes the human condition.

I don’t know what to make of Rudy Rucker’s “After Everything Woke Up.”  Of course, that’s frequently the case with his work, it takes a little work sometimes to try to figure it out.  But this story is a slapdash of reality show satire, cyberpunk virtual reality and mystical pantheism that doesn’t really go much of anywhere.  Apparently this is an excerpt from an upcoming novel called Hylozoic and, as such, serves primarily as a promotional trailer.

Interzone‘s regularly featured Jason Stoddard, whose “Monetized” is this issue’s lead story, also makes you work a little to figure out his near-future setting.  The narrator’s mother has developed a software program whereby your social networking earns royalty payments.  The higher up you are on the virtual community’s “friends list,” so to speak, the more you make.  Because his mother is who she is, our hero is pretty high up there.  And pretty much jaded by the whole deal.  Of course, the plot concerns our hero’s rebellion.  While something of this sort is expected, still a well-imagined “mundane” reality not all that far removed from where we are today, which, I would think, is the whole point.

The one story that couldn’t by definition fall under the mundane banner is “Memory Dust” by Gareth L. Powell, which is pretty much Golden Age interplanetary adventure.  (Now, here is where I think categorization is useful; my guess is that everybody has an immediate impression of what this story might be about in using this terminology;  I’m fairly certain this wouldn’t be the case by simply describing , say, Stoddard’s tale as “mundane.”)  A famous pilot returns to a planet of a ruined civilization that has haunted his dreams.  He brings his girlfriend along. Suffice it to say that they don’t live happily ever after; or, at least, one of them doesn’t. Might have been the premise for a Star Trek episode.  Which is damning with faint praise.

This issue also include a short interview with Jeffrey Ford who, thankfully, is anything but mundane.

Interzone 220 through the Gated « Jim Steel’s Cave of Doom

[…] recommend, and Sinner, Baker, Fabulist, Priest: Red Mask, Gentleman, Beast, which I’d also recommend checking out. The titles alone make me want to seek out the Bowes and […]

[…] raises some unsettling questions about the connection between non-conformity and sociopathy.—Black Gate Of the [Interzone 2009] novelettes, my particular favorites…Foster’s […]