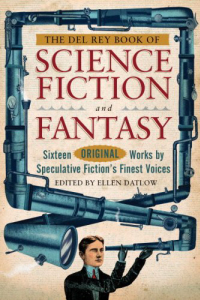 Well, here we are again with another short fiction collection with a dumb and unoriginal title –
The Del Rey Book of Science Fiction and Fantasy is the latest entrant in a long line of insipidly titled collections that have contributed their small part towards the ghettoization of the genre.  Presumably this is not editor Ellen Datlow’s fault, but rather that of some marketing department genius. You might think that a publishing house with a pedigree like Del Rey Books could actually use some imagination when titling works of the imagination.

And while the subtitle hedges a bit in announcing “Sixteen Original Works by Speculative Fiction’s Finest Voices,” there is a truth in advertising issue here.  In point of fact, there is almost no science fiction here.   As it happens, the clear exceptions are also the least interesting.   A Paul McCauley and Kim Newman collaboration starts out as a satire of the Abu Ghraib prison fiasco, but degenerates into pulpish humans versus the strange alien invaders that has even more to do with the genre’s ghettoization than bad titles.  The other is Maureen McHugh’s “Special Economics”; her depiction of China’s exploitation of workers in which the plucky heroine outwits her techno-capitalist oppressors puts perhaps too light a spin with a happy ending on its dark subject.

While most everything else might be called fantasy, it’s far removed from elves and wizards kind of stuff.  Rather, it’s a mix of literary (“Aka St. Mark’s Place” by Richard Bowes; “Sonny Liston Takes the Fall” by Elizabeth Bear), magic realism (“Ardent Clouds” by Lucy Sussex),  Angela Carter-style recasted fairy tale (Margo Lanagan’s “The Goosle”),  horror (Christopher Rowe’s “Gather”; “North American Lake Monsters” by Nathan Ballingrad; “Lagerstätte” by Laird Barron; “Jimmy” by Pat Cadigan; “Gladiolus Exposed” by Anna Tambour), alternate history (Jason Stoddard’s “The Elephant Ironclads” and “Shiva” by Lavie Tidhar) and satire/humor (“All Washed Up While Looking for a Better World” by Carol Emshwiller; “The Passion of Azazel” by Barry Malzberg; Jeffrey Ford’s “Daltharee”).

My personal favorites here are the Ford, about the titular city in a bottle, with perhaps an oblique reference to Samuel Delaney’s Dhalgren; the Emshwiller, whose plot synopsis is contained in the title, a woman physically stranded on an island and mentally stranded in her own ego ever seeking the next tropical paradise; Malzberg’s biblical parable about confronting God’s incomprehensibility; Barron’s study of self-obliterating grief; and the Lanagan, about more of which in a bit.  Perhaps the most intriguing —  and surprising from an author I’m not overly familiar with but whose “name recognition” came with different expectations — is “Sonny Liston Takes the Fall.”  It may be hard to appreciate if you’re not already familiar with the historical encounter between boxing’s then brash new golden boy, Cassius Clay before he became the iconical Muhammad Ali, and the old school street fighter whose one punch downfall was rumored to have been a mob ordered.  The fix was in according to Bear, but in a much different way than the story is usually told.   Highly recommended; if you don’t know the history, it’s worth doing a little research to really appreciate this one.

So, here we have a rather diverse gathering with no shared thematic manifesto (though many of these would have found a home in the various New Weird, Interfictions and Paraspheres collections) other than that they seem to have caught  Datlow’s fancy as “imaginative fiction,” that she says is oftentimes “clothed as science fiction, fantasy and horror.”

All of which really pisses off Dave Truesdale.

Normally, this space is not intended to review other reviews. In fact, I usually avoid reading other reviews until after I’ve written my own, for the obvious reason that I don’t want to be unduly influenced by someone else’s opinion.   Also, by the time this review appears, the controversy dusted up by Truesdale will have become old news and, some might argue, best forgotten. Still, that said, Truesdale raise some points of interest that merit attention.

The first I’ve already mentioned: the title is misleading.  This is not your father’s science fiction and fantasy.   But, for my taste, that’s a good thing.  Understandably, if, like Truesdale, you’re looking for more conventional material, you could be disappointed.

Truesdale’s second point is that many of the stories trod familiar territory.  Well, yeah, but most rock and roll uses the same three or four chords.  That’s hardly sufficient critical reason to dismiss most of the canon. The question is whether, lack of originality notwithstanding, they expand the territorial boundaries, or are just plain fun.  I think most of them succeed.

Case in point is Tidhar’s “Shira,” which is yet another of those post-modern lit crit, post-Dickian meditations on when does fiction and non-fiction blur to merge to the point where we can’t tell if we are reading a story or participating in it.  Not an original concept.  But Tidhar’s alternate reality, in which a “Second Holocaust” that has apparently devastated Israel has somehow or other led to peace in the troubled region, is intriguing.  In a used bookstore, the protagonist stumbles across the work of a poet (who, as it happens, also writes science fiction) related to the catastrophic events and the question of God in the affairs of humanity:

The story is about the continuing search for meaning, and that it is a search that doesn’t necessarily follow a linear narrative.

Similarly, Stoddard’s “The Elephant Ironclads” somehow manages to place pachyderms on Navajo land in the Southwest shortly after the end of World War II.  Wallace Chee has offered to guide a pair of white men on what turns out to be a search for uranium.  What follows is an alternate Cold War scenario in which the play for world dominance through ownership of atomic weapons clashes with Native American mythology as the background for Chee’s coming of age in making hard choices on the path to adulthood.

Now, none of this may be your cup of tea if you were hankering for some space opera.  In fact, all the stories are earth-bound.  But what really is from another world are Truesdale’s comments regarding “The Goosle,” based upon the Hansel and Gretel fairy tale, to which he objects because it centers on child molestation. The fallout is nicely summarized over at Torque Control along with an incisive analysis of the story.  I’d simply like to add two observations.  The first is that the original story – not the watered down, Disney-fied versions for modern kids – concerned the very real terrible hardships of medieval life, primarily famine.  And, back in those days, it was not uncommon for an entire family to share the same bed, which is why Freud had so much fun with these stories.  Killing your (step)mother to live happily ever after with your father has definite sexual connotations.

Presumably, Truesdale is aware of that.  His objection to the story rests primarily on the assertion that Lanagan’s retelling is merely gratuitous shock value.  To me, priests molesting altar boys is pretty shocking, and it seems to me literature has every right, if not an obligation, to explore the darker aspects of human behavior.  Indeed, science fiction and fantasy is often dismissed as “not-serious” literature because of its obsessions with space ships and elves, and not “real life.”

Now, Truesdale could perhaps argue that Lanagan does not succeed from an artistic standpoint, but he does not (for a good analysis of just how the story succeeds artistically, again refer to the Torque Control post).  Moreover, and this is where it gets really peculiar, Truesdale maintains the subject itself should be verboten.  His contention is that the publisher should have censored itself because some young boy may innocently pick up this volume anticipating tales of aliens and ray guns, and instead encounter homosexual child rape.  Let’s hope that kid never ventures out of the science fiction and fantasy aisle at Borders N Noble into the literature section and stumbles upon something like Nabokov’s “Lolita.” 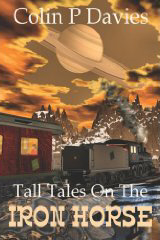 Tall Tales on the Iron Horse

Now, here’s something Truesdale should like: a collection of 19 stories by Englishman Colin P. Davies, gathered from such bona fide science fiction journals as Spectrum, Andromeda Spaceways Inflight Magazine, and Asimov’s, among others.  The operating system is rooted in early Bradbury and the Twilight Zone – things are not always what they seem, or as they should seem.  There’s the usual assortment of odd suspects – a writer (named “Gunn” perhaps in tribute to James Gunn?) who challenges social norms, carnivals coming to town,  a talking doll, an immortal goddess ensnared by mortal love, strange persons from different dimensions, a bereaved husband, you know the drill.  These are all devices pointing to the illusions of what we like to think of as reality.

Case in point is the titular opening story, a 2002 honorable mention in Gardner Dozois’s Year’s Best Science Fiction.   Here’s how it starts:

Two kilometers inland from the equatorial Sumatran port of Padang the train turns sharply, plunges into the mountain, and clatters down through a darkness relieved only by the occasional glimmer of St. Elmo’s fire, finally emerging, after three days by the clock, into the icy, orange daylight of Saturn’s moon, Titan.

At least, that’s what Gillian said.

Gillian is the narrator’s “talker,” telling him stories to make sure he doesn’t fall asleep.  Why that would be a bad thing, and what that has to do with the narrator’s attempt to rescue his girlfriend from a religious cult, is not, of course, clearly revealed until the final sentence.

Actually, despite working within a more familiar genre paradigm, Davies is looking to do the same thing that the various authors of Datlow’s Del Rey anthology – question our assumptions about the boundaries of reality, holding them up to examination from angles that skewer conventional perception.  In that sense, Davies’s tall tales share similar ground with Lanagan’s cruel fairy tales.  And, in their own pulp-inspired way, provide highly entertaining “shock value.”

Greatest Uncommon Denominator is just releasing its fourth, though titled #3, volume (I reviewed the inaugural “issue 0” here).  I haven’t read it yet, but the magazine is running a contest in which you can win all four volumes in hard copy.  Check it out here.

[…] (reprinted from The Del Ray Book of Science Fiction and Fantasy, a review of which you can read here.) . Cover art by Julia Dillon. Nonfiction by Peter M. Ball and editor Lynne M. […]