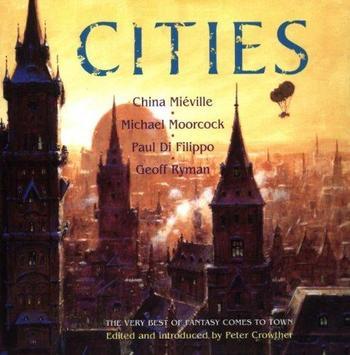 It’s been said many times that the ideal length for SF and fantasy is the novella. Long enough to establish a fascinating setting, and short enough to pack a punch. It’s been my experience that this is very true — much of the best fantasy I’ve read has been at novella length, and the format has a long history of excellence.

Peter Crowther is one of the most accomplished editors in the genre, and he’s produced some terrific anthologies over the years. But I think perhaps I’m fondest of his 2004 collection of fantastic novellas featuring four very different fantasy cities, by four of the biggest names in the field: China Mieville, Michael Moorcock, Paul di Filippo, and Geoff Ryman.

The city has always loomed large in the imaginary landscape of fantasy. Cities celebrates the fantastic potential of the city, whether in the terrible grandeur of China Mieville’s ruined London, a city overrun by a sudden, fantastical invasion, or the unsettling high-tech, high-paranoia of Geoff Ryman’s urban future. Elsewhere, heaven and hell snap at the heels of the inhabitants of Paul di Filippo’s Linear City, and Michael Moorcock invites us to join Jerry Cornelius on a tour of the uneasy streets of a future built on the ruins of September 11th. Here is fiction from four of the genre’s most respected names: an A-to-Z to the streets of the imagination.

With four of the biggest names in fantasy fiction united in one volume, each with a novella that has never been available outside the collectors’ market, Cities is the fourth of Peter Crowther’s Foursight anthologies and is proof positive that the fantastic novella is alive and thriving.

Cities was published by Peter Crowther’s PS Publishing, which had an interesting business model. They would publish highly collectible, limited edition original novellas from the top writers in the industry… and then, a year or so later, collect them in handsome omnibus volumes.

Crowther called the omnibus volumes Foursight anthologies; all told he published five. These Foursight books each presented four novellas from four different authors. They are:

They’re all worth tracking down.

Cities contains four novellas, each of which had previously been published in a deluxe limited-edition hardcover from PS Publishing:

Off the Beaten Track: An Introduction, by Peter Crowther
The Tain by China Mieville
Firing The Cathedral by Michael Moorcock
A Year In The Linear City by Paul di Filippo
V.A.O. by Geoff Ryman

All four novellas were very well received. A Year In The Linear City was nominated for three awards — the Hugo, the Sturgeon, and the World Fantasy — while The Tain was nominated for a British Fantasy Award, and placed first in the annual Locus poll for Best Novella. Firing The Cathedral also received a BFA nomination, and V.A.O. made the Locus list (#20) for Best Novelette.

Cities was published by Victor Gollancz in April 2003. It is 292 pages, priced at £12.99 in hardcover in the UK, and $17 for the US trade paperback edition from Four Walls Eight Windows. The cover is by Edward Miller. There is no digital edition, and it is currently out of print, but copies can still be obtained online for around $10-15.

[…] this morning, in my article on Peter Crowther’s anthology Cities, I observed that the novella is the natural length for fantasy and science fiction. The novella has […]

I read that shortly after it came out. The di Filippo piece’s setting is incredibly memorable, but I have no recollection of its characters or story. The Mieville was marvelously creepy, and it’s the only one of his works I’ve managed to read to the end. (It’s not the disturbing side of his imagination that bugs me, but what feels to me like an excess of sentence-level ornament. I don’t mind an author who occasionally winks at the reader, but in the opening of Perdido Street Station, I found there were so many winks, nudges, nods, and flourishes, he put me in mind of a friend who has Tourette’s Syndrome. My loss, probably. In a few years I might try him again.) Ryman’s was my favorite of the novellas, with a premise at once hilarious and heartbreaking, and a wonderful friendship at its core.

The Moorcock story has vanished from memory altogether. I wonder what I thought of it.

Thanks for the mini-review, Sarah!

Glad to see you enjoyed the Ryman so much. All the others were candidates for major awards; it seems to have been the most overlooked at the time.