In High Fantasy the characters make new history by engaging with the old; Frodo disposes of the ring and secures Middle Earth’s future, but the Ring Wraiths are ancient kings and the politics is grounded in the past. In Low Fantasy — what we mostly call Sword and Sorcery — the characters forage like ants in the debris of history; Conan loots ancient tombs, and loses his sweetheart to an antique monster.

In between, the heroes of Heroic Fantasy delve in the past in order to remake the present; the heroes in Michael J. Sullivan’s Riyria Chronicles actually resolve the geopolitical plot with an extended stint of dungeoneering.

And if Science Fiction is about future history, then it’s also often about future ancient history. We love our alien artefacts and lost forerunner civilisations. What is Aliens if not a Dungeons and Dragons story, but with more face huggers?

So we readers of Speculative Fiction also have an appetite for history, not just the down in the dirt tales of derring-do with William Marshal or Harald Hardrada, or the Rifle Brigade, carving out their personal histories with blade or bullet, but longer thrilling stories of the rise and fall of civilisations, or the evolution of a particular strand of human experience, whether it be war or sexuallity, or gender, or commerce.

Oddly, as noted by a pair of top historians, not a lot of these books are written by card carrying academic historians anymore…

According to their History Manifesto (free download) modern historians have fled the general to hide in the specific, leaving the field wide open to — I paraphrase — cranks, journalists, Futurologists, economists (assuming they’re not the same thing as cranks) and others. For them this is a bad thing because politicians and civilisations need to take an informed long view, not a conveniently made up one, and because History has lost its justification.

For us it’s a bad thing because… well sweeping histories are cool and we like reading them, and they may spark off some interesting novels. It would be nice if academia took heed and started pushing out books that took the long view. Nicer still if they were readable. It’s a tragedy that the books of the professors of yesteryear are generally a better read than those of today. (Perhaps the manifesto should append a link to Steven Pinker’s The Sense of Style: The Thinking Persons Guide to Writing in the 21st Century.)

In the meantime, there are some grand narratives knocking around that we enjoy with a clear conscience, at least until a “proper” historian rolls up to write something as compelling but more correct. You’ll all have heard of Jared Diamond’s Guns, Germs, and Steel, which deserves an article in its own right. So let’s have some other books instead.

First we have something that the History Manifesto would approve of:

Why the West Rules–for Now: The Patterns of History, and What They Reveal About the Future by Ian Morris, who teaches Classics, History, and Archaeology at Stanford University, is all about the geography. He sees the triumph of the west as both inevitable and fleeting. Europe’s craggy, river-riven landscape fosters small kingdoms and city states, which fought, competed, innovated. Compared to the East, we had easier access to both mineral resources and the New World. A few hundred metres of rock, a few thousand kilometres of ocean difference — that’s all it took to nudge History our way… for now. However these aren’t advantages we can bank on. All this makes the book invaluable for world builder’s, whether creating alternate histories, secondary worlds, or peering into the future looking for a yarn you can spin.

Then we move into books by academics who aren’t quite historians.

Debt – Updated and Expanded: The First 5,000 Years is by David Graeber, an anthropologist, and his speciality shows both positively in his close grasp of how people live on the ground, and, negatively, in the way he seems to miss some of the nastier aspects of ancient cultures while finding proto-Feminist utopias. What this book is good for is an understanding of how currency-free economies really operated and continue to operate. That thing they told us at school? Barter economies? You know, Farmer has chickens but wants a new plow. Blacksmith doesn’t need a hundred chickens — can’t eat them all — but accepts them in order to trade them for leather from Herder he does need… Never happened. Everybody was related, or had long relationships reaching back generations. What really happens is that Farmer has been giving his cousin the Blacksmith the odd chicken for years. When he mentions his plow broke, the Blacksmith  just makes a new plow. The hides arrive as gifts from from Herder — her nephew — who always picks up a new scraper or knife when he needs one. Barter is what happens on truce days with the neighbouring tribe…

A good read that will give you equal insight into Heinlein-esque space colonies, and Cimmerian settlements. 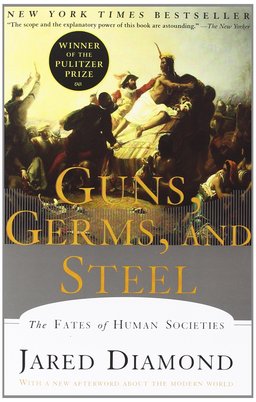 The Better Angels of Our Nature: Why Violence Has Declined by Steven Pinker, a prominent psychologist, is controversial to say the least. His Big Idea is that the per capita violent death rate has declined dramatically. For example, yes, World War II and the atrocities wrapped around it were awful. However, your survival chances are still better if you are invaded by the Nazis than by Tamerlane’s Tatars. His explanation for this is all about the way cultures internalise the laws placed on them, how people have increasingly wider ties, and how fiction, film and news reporting have made us more empathic. He thinks primitive warfare was, rather than safely ritualised, horribly destructive. After all, if two 10-man bands clash and stop fighting after two KIAs each, each clan has lost 20% of its adult men. Whoops.

It’s worth reading for the historical and anthropological anecdotes, and for the psychological studies that give us insight into violence.  The snag is that Pinker is not a Historian, so be prepared for his statistics to take a beating. Your mileage may vary, but it’s a good read and will get you into some interesting arguments online and off.

Finally, we move to the educated amateurs. Let’s have just one example.

Sex and Punishment: Four Thousand Years of Judging Desire is by Eric Berkowitz. He’s a lawyer and it shows in his close attention to law, case law and specific cases. It’s well written with a light touch, otherwise it would be a depressing read. Sure, there’s some evidence for early medieval male-male partnerships being blessed by the church — a happy thing if you have liberal sensibilities — but don’t be accused of being an adulteress in ancient Babylon. Whatever your gender neutral economic rights might be (see Debt, above), they throw you in the river to let the gods decide your innocence. Athens, the shining example of early democracy, was also the shoddy example of institutionalized wife beating. In some ways a better title might be, “Misogyny and Queer Bashing through the Ages, or how the Past was Really Very Awful if you weren’t a Cis Straight Male”. On the good side, things do get better, if not perfect, and — for a writer — it’s a source of adversity to throw at your characters, and a powerful corrective to any nostalgia you might feel.

It’s good books like this exist. Let’s hope the History Manifesto brings a few more out of the woodwork and onto our bookshelves.

M Harold Page (www.mharoldpage.com) is a history graduate and  Scottish-based writer of — at present — Historical Adventure books. His creative writing handbook, Storyteller Tools: Outline from vision to finished novel without losing the magic is available on Amazon. If you live near Edinburgh, Scotland, he would love to teach you how to fight Medieval German Longsword.

I would also add “The Art of Not Being Governed: An Anarchist History of Upland Southeast Asia” by James Scott, about the people of the Highlands of Southeast Asia, who he claims settled those remote areas to escape the rule of the coastal Lowland kingdoms.

Why the West Rules — for Now is exactly what I need while I’m turning my comically rough map sketches into Actual Maps. (Oh, and thank you for your helpful discussion of the differences between Fractal Mapper and ProFantasy in last week’s post.)

Martin beat me to it: The Art of Not Being Governed is a great book. So is Scott’s Seeing Like a State. I’d also recommend:

-Jane Burbank and Frederick Cooper’s Empires in World History: Power and the Politics of Difference, which is a global history of empires by historians.

-Lincoln Paine’s The Sea and Civilization: A Maritime History of the World, which takes world history from a maritime perspective.

–Geoffrey Parker’s Global Crisis,it’s basically a global history of the 17th century, which, due to a 1-2oC fall in global temperatures was a time of unrest, civil wars, and the fall of kingdoms and dynasties around the planet. If you want to see how environment shapes politics, this is the most meticulously documented book I’ve seen, far more thorough than anything Diamond’s written.

-Karl Meyer and Shareen Blair Brysac’s Tournament of Shadows: The Great Game and the Race For Empire in Central Asia. It’s a history of the Great Game, told from the point of view of its participants, rather than the politicians back home. Great early spy stuff.

> Tournament of Shadows: The Great Game and the Race For Empire in Central Asia

Yes. Good one that, though rather a lot of it. Read best team tagging with some Harold Lamb.

[…] pretty much as Harold Lamb would have done it. (It’s also the kind of sweeping history that the History Manifesto calls for, but which academics rarely seem to deliver (because few of them could write their way […]