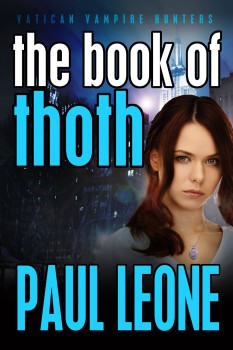 Considering my dislike of vampires, I seem to review a lot of books about them. Either vampires are hard to avoid or I just can’t help myself. Paul Leone’s The Book of Thoth is part of his Vatican Vampire Hunters series. As you might guess by the name of the series, Mr. Leone does not shy away from religious themes. Or vampires. In his series, vampires are literally demons escaped from Hell, occupying the bodies of the dead. This explains why they so hate and fear anything sacred, whether it be holy water, crucifixes, churches, or even the blood of the righteous.

Nicole van Wyck is an heiress who has no interest in going into the family business and who is rapidly losing interest in the clubs and parties all her friends are involved in. Her life is threatening to become the aimless drifting of so many of the rich and irresponsible. That is, until she friends meets her first vampire. Fortunately for her, the vampire is being tracked by a group of church-sponsored hunters, who chase it away with no one the wiser. Except for Nicole, who suspects that there’s more going on than the friends who are with her realize. When she does track down the hunters, they make her an offer to join them and Nicole concludes that if vampires are real, then fighting them is not optional.

Nicole is certainly not another vapid heiress. She works hard, whether tracking down a mystery or training to fight vampires. She also has a strong moral center, which comes through both in how readily she leaps into the fight and in how she is willing to argue against her own team when they cross the line. Nicole is certainly a capable heroine, but she and her fellow hunters are not facing run of the mill vampires, but a veritable count of Hell, Count d’Aubert, and his very dangerous minion, Alice. The demons in dead flesh are after the titular Book of Thoth, which holds the secrets of Satan himself. To do that, they must gather three keys to open up the book’s hiding place.

This is where I think the book misses a major opportunity. The hunters, even with the aid of Kabbalistic prophecy, never learn of the Count’s plans, never find themselves in a race against him to retrieve the keys. Instead, they head straight for the source, up against the Count and Alice themselves, without knowing what plot they’re trying to foil until the end. But on the whole, I forgive this weakness, as the parallel stories of Alice (and make no mistake, she’s more central to the story than the Count) and Nicole creates the interesting tension of a race where neither side knows who their opponent is. I won’t say I was cheering Alice, as she’s a murderous sadist, but I was still hoping for her success in her quest, as I think the best stories are the ones where the villains almost succeed. (Second only to the stories where the villains actually succeed and the heroes have to pick up the pieces.)

There is also a romance sub-plot, which seems to be mandatory for novels these days. Nicole’s love interest, Marty Black, is the only other single person in what is otherwise an all-couples vampire hunting group. While their initial attraction seems to be more due to convenience than any explicit chemistry, I found the way it played out to be refreshingly realistic, though tied up perhaps a bit too neatly at the end.

The Book of Thoth is well-written and exciting, with plenty of action, solid pacing, and a tense plot. I did think the action was a little abrupt sometimes, with the payoff not living up to the build-up. But that’s a minor quibble. A bigger one is that the book can be overbearing in its religious themes. Catholicism plays a large role in this book, so much so that even as someone with a lot of sympathy for Catholicism (although I am not Catholic myself), I think it was too much at times. A significant portion of the story was Nicole’s own religious conversion, which, aside from being tangential to the vampire killing I came for, felt a bit forced. Others with less sympathy for Catholicism may find it too preachy for their liking.