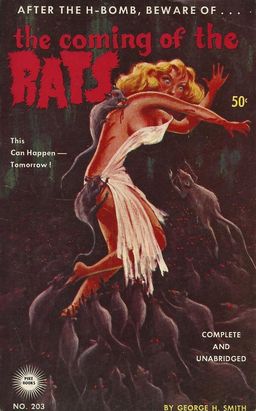 A lot of post-apocalyptic novels and films appeared in the 50s and 60s. World War II was still a recent memory, and the threat of the H-Bomb was very real, even if most folks didn’t understand exactly what the “H” stood for. Publishers and filmmakers played on the very real terrors people faced every day. Fear of another war. Fear of atomic radiation.

And, going by the cover of George H. Smith’s The Coming of the Rats, the deep-seated fear that rats would attack our women and strip their clothes off.

Now, I’m not sure how our parents and grandparent dealt with these crippling fears, but from what I understand their coping mechanism involved a lot of cheap paperbacks, and multiple Saturday matinees (which seems like a stable strategy, when you think about it).

This is how that generation learned the facts about atomic radiation. And how the logical result would be mutants, and lots of ’em. Giant mutant ants. Mutant town-eating blobs. And horrible, women-chewing mutant rats.

Which brings us to The Coming of the Rats, and its hallowed place in the post-apocalyptic fiction canon.

Author George H. Smith (not to be confused with George O. Smith, author of Venus Equilateral and Troubled Star, or the George H. Smith who wrote Swamp Lust, Swamp Bred, and other swamp love classics) had a checkered career as a paperback writer in the 60s. His first publication was a short story in Startling Stories in 1953, and he sold a number of stories to SF magazines throughout the fifties before graduating to novels. He’s mostly remembered today for a line of soft-core erotica written under various pseudonyms.

His first attempt at more serious SF was The Coming of the Rats. But nobody told the cover artist, who cheerfully went the soft-core route, depicting a toga-party victim unsuccessfully fending off high-jumping rats.

Of course, the best covers intrigue readers and make them ask questions, and this cover made me ask questions. Chiefly, “Why are you wearing a dish towel?” 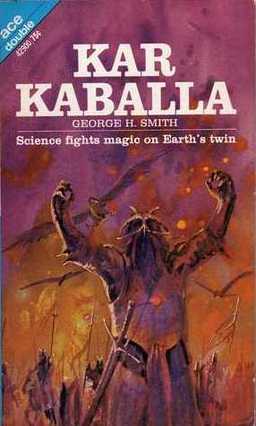 Altogether, Smith wrote over 100 novels. Most of his SF and fantasy is fairly easy to find. His early erotica, however, not so much… fewer copies seem to have survived, and what remains is highly collectible.

The Coming of the Rats, sought after by both SF and early erotica collectors, is one of the hardest of his titles to come across. It opens shortly before the US is devastated in a nuclear war, and gradually becomes a survivalist novel in which our square-jawed hero and his harem of surviving women battle mutated rats.

I’ve never seen a copy myself, and I doubt you will either. Here’s the back cover copy:

Would this be the end of Mankind? The shadow of nuclear warfare falls on all of us. How many would survive? And how many are prepared?

After such a war… what then? Then the earth will be populated by whatever LIVING THINGS can best survive the radiation fallout. And rats can absorb more than twice as much radiation as man – and live!

I clicked on that link. Talk about re-packaging!

Glad you enjoyed it, James.

> I clicked on that link. Talk about re-packaging!

I know, right? Just when you think the cover can’t get any more cheesy…

Although, of all the covers I uncovered while researching this post, my absolute favorite was the cover for SWAMP BRED. If you haven’t clicked on the link above yet, check it out. “Her pagan desires violated even the loose moral code of the marshlands.” Amazing.

Apparently there was an entire genre of “Swamp Love” novels in the 60s. Who knew? And what could have possibly happened to it?

I did click on all the covers. Yeah, I don’t get that “swamp love” thing. As close as I can get to it is childhood memories of being in love with Daisy Duke on The Dukes of Hazzard television show.

Sheesh! I was just imagining if “swamp love” became an enduring genre category, like “paranormal romance.” God help us!

Why was she wearing a dish towel? Because her wash cloth was at the dry cleaners. And everyone knows you don’t wear cheesecloth while battling rats, for obvious reasons.

You know, I never thought of that. And it makes so much sense.

You clearly have a keen mind, tightly attuned to the logic of paperback covers. I bet you can make more sense out of late night cable programing than I can, too.

If it’s any consolation, she won’t be wearing a dish towel for long.