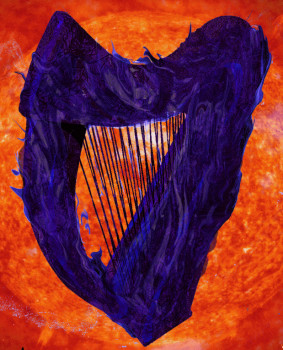 My first post about my novel, The Black Fire Concerto, discussed the monsters. (It’s only fitting, I think, that the first library filing I’ve seen for the book categorized it under “Monsters – fiction.”)

Yet obviously music’s important to the story too and Black Gate overlord John O’Neill has asked me to share my musical inspirations. Once again, I’m grateful to him for allowing me a platform.

If you asked me to hum the concerto that’s central to the book, I couldn’t do it; though I like to think I’d know it if I heard it.

My heroine Olyssa plays a magical pipe that doubles as a rifle that never misses (and if you’re wondering how that works, this excerpt at the Haunted Stars Publishing website will tell you everything you need to know.)

Her sidekick Erzelle plays a harp formed of magical energy that manifests as black fire. I can at least share an illustration my wife Anita and I created to approximate what the harp looks like.

My own musical interests might seem contradictory. I was raised on classical, yet heavy metal is my drug of choice. Both inform The Black Fire Concerto.

A little background. When I was in middle school (back in Precambrian days) I’d sometimes “borrow” my parents’ vinyl records of works of classical music and play them after bedtime on my little neon orange phonograph.

I didn’t like the full range of composers by any means. I tend to find soft, gentle music boring and irritating rather than relaxing. Some pieces, though, I would listen to over and over again, such as Edward Grieg’s “In the Hall of the Mountain King” from the “Peer Gynt” suite. I developed a special appreciation for Igor Stravinsky’s “The Rite of Spring” – I loved its energy and its rebellious atonality (and the fact that the audience rioted at its 1913 premiere.)

However! About the time I started high school, I discovered another kind of music that delivered the rush I craved more consistently. And much to my parents’ consternation, I delved deeper into heavy metal than I ever did with classical.

Yes, Def Leppard was my gateway drug. (Go ahead, laugh … but you have to admit, Pyromania was a great album for its time.)

The point of no return arrived when I scraped together my allowance from washing dishes to purchase Defenders of the Faith by Judas Priest. Here was the imagery of science fiction, fantasy, and horror that I’d been gorging on throughout my grade school years, set to a pure adrenaline blast. I never looked back. Iron Maiden. Metallica. Slayer. Sepultura. And some classics too: Deep Purple, Black Sabbath, AC/DC. And too many more to list. 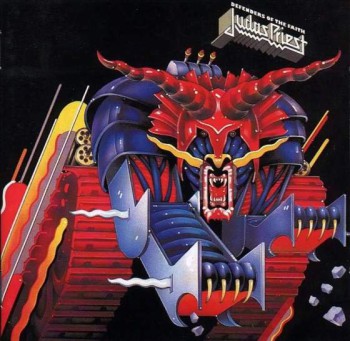 I never expected that I’d come back around to classical music before it was all over … and yet fate made it so. Four years ago, I became the arts columnist for my city’s newspaper. (It’s a wonderful gig.) My responsibilities include covering our classical music scene here in Roanoke.

Despite my childhood dabbling, I’m no expert — but I was lucky enough to spend ten days in New York through an NEA journalism fellowship, attending world class orchestra performances and then attempting to review them.

What I found was that I lack the background necessary to tell you whether or not the violins were out of tune in the third movement, but I could at least eloquently express my appreciation for what I heard.

So what does all of this have to do with The Black Fire Concerto? Well, everything.

I doubt I would have ever dared to make my heroines classical-trained musicians without that crash course in New York. The way they fight their battles with musical notes, on the other hand — that’s lifted straight from the iconography of heavy metal.

Consider all those wonderfully awful music videos by Judas Priest, Accept, Twisted Sister, and the animated film Rock & Rule with its Cheap Trick soundtrack that played all the time on HBO back in those days. Notes from heavy metal guitars blast down walls, explode heads, drive demons back to the hell they came from.

(Since I’m talking about music as weaponry, I feel that I’d be remiss if I left out the wonderful harp-playing assassins in the movie Kung Fu Hustle, whose notes become knives. That’s soooo metal. Even if the music isn’t.)

Music is a weapon. It causes riots and scares governments. Heavy metal just happens to express this in a melodramatic, literal-minded manner.

I have to thank my buddy Nicole Kornher-Stace for introducing me to the fictional band Dethklok from the Adult Swim cartoon Metalocalypse, whose songs are hilarious and at the same time skull-crunching (that’s a good thing!) and whose videos take the violent, occult motifs of hardcore metal to hysterically hyper-gory extremes. Though the intent is usually satirical, if you’re at all a fan of the original Heavy Metal movie, some of Dethklok’s videos play like a walk down memory lane.

So classical musicians dishing out metal mayhem. That’s The Black Fire Concerto in a nutshell.

It’s not unprecedented, you know. Consider Metallica’s Lovecraft tribute “The Thing That Should Not Be” accompanied by full orchestra. Or Accept breaking into Soviet Armenian composer Aram Khachaturian’s “Sabre Dance” in the midst of “Sodom and Gomorrah” from their way underrated album Death Row. Rammstein realized with cellos.

Or these eldritch harper twins, sharing Iron Maiden’s “Fear of the Dark.” 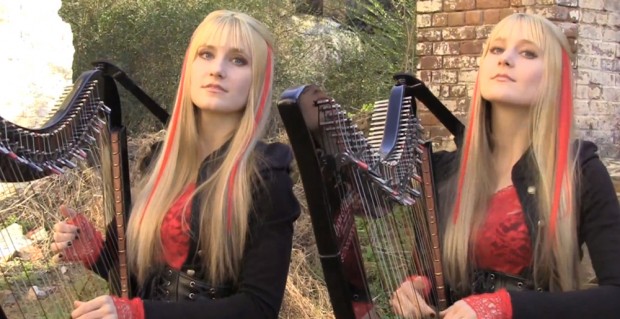